Central garden seen from inside the Palace - Expo Paris 1867 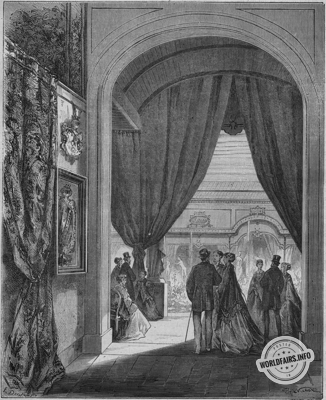 We have given or will give successively the different aspects of both the Palace and the Park, so that our readers can recompose the whole monument of the Champ de Mars as soon as it has disappeared.

When one enters the Palais and arrives at the latitude of the Galerie des Beaux-Arts, one has in front of one the view of the central garden as it is represented in our drawing of today. This view is taken from the rue d'Alsace, but if you were to arrive by any other radiating route, the appearance would be more or less the same. As the central garden is very narrow in relation to its length, only the diametral lanes of the large and small axis open directly onto the pavilion of the mints, which is the exact middle of the central garden. By all the other radiating paths, one discovers only one or the other half of the central Garden, which are absolutely similar. The edges and the middle aisle are filled with statues, some of which are remarkable - we will tell you about them another time. Roses are planted between the pedestals. A double garland of flowers in flowerbeds forms a belt. A water fountain springs up in the middle of the double bed.

The archway through which these beds and the outer canopy on the opposite side of the point from which we enter the garden can be seen, this archway, I say, is decorated with Gobelin tapestries raised by tiebacks.

Our readers have already been told about the archaeological drawings that line the walls of the marquee: we will speak another time, I repeat, about the statues lavished in the counter-alleys. Let us talk today about the Garden itself.

This is not the garden we had dreamed of. Instead of etic roses, Lilliputian ponds and miniature flowerbeds, the idea was to transport ornamental foliage trees, flowering shrubs and plants with large spires, and to dig two large ponds between a central causeway, which would have been crossed on bridges to go from one side of the Garden to the other, and from which large water jets would have sprung.
But the delay in installing the Palace made it impossible to transport the trees intended for its decoration to the Central Garden. And this is how the Reserved Garden benefited from what the Central Garden lacked. The mint pavilion, which could just as easily have been placed in the Park or under the great gallery of machines, replaced the planned large transverse causeway, the middle of which would have been occupied by an orchestra.

The Pavilion of the Coins is very ingeniously installed, but it lacks elegance, and it cuts the view of the Garden in two, which, in spite of this, is very pleasant in detail.

There had also been talk of covering the whole Garden with a huge canopy: this would have been easy, given the small width of the Garden, and I do not know why this project was abandoned: the folding of the canopy would have been an evening's entertainment for the first visitors.

But we couldn't do everything, and the expenses had to be rigorously calculated.