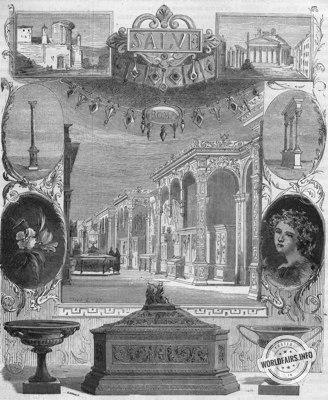 Glory to Fr. Secchi! Three times blessed be his meteorographer! Thanks to the learned Jesuit and his work, the honour of the Papal States is saved, and their leader will be able to say, after the Exhibition, as Francis I did after the day of Pavia: "All is lost but the honour. "

Without Fr. Secchi and his marvellous instrument, what an awful rout the industrial army, or rather the band of irregulars that Rome did not fear to put in line at the Champ de Mars, would have suffered!

By allowing its industrial weakness and impotence to be displayed in this way, has not the Roman government shown too much Christian humility; and, out of human respect, would it not have done better to abstain a hundred times over than to make the whole world aware of the deplorable decadence into which the arts and industry have fallen in Rome today?

Many Catholics think so, and we think so with them.

It is by its beautiful sides that one must appear in public; as for the others, it is prudent and in good taste to conceal them and leave them in the shade.

Now, in the field of arts and industry, Rome cannot today, with any chance of success, accept the struggle with anyone.

How, in fact, are things done in Rome, in this sanctuary of prayer and pious works? The arts are understood there only in their direct application to holy persons and things; as for industry, its usefulness is recognised only in the very small number of its products, which have long been considered indispensable to the needs and splendour of worship.

If the delegates of the temporal power consent to close their eyes to a few isolated deviations and individual attempts; if they allow that, by accident, art and industry are exercised outside the religious circle, they believe that they are showing a tolerance which, it must be said, is generally disregarded; as for pushing and encouraging anyone to do so, that is another matter: Artists would multiply masterpieces and produce wonders, science and industry would make the most magnificent display of their forces and resources, that from the top to the bottom of the clerical hierarchy, no one would pay any attention.

As we contemplated the meagre exhibition of the Papal States, the proud motto Italia si fara da se came back to our minds, and what we had before our eyes confirmed us in the opinion that this profession of faith should be taken neither literally nor seriously, that it is neither binding nor committable to anyone, and that it is merely the jest of a boastful patriotism.

Apart from the metereogaph, the most important work in the Roman exhibition is by Mr Vincent Rigacci, the waxworker at the court of Rome. In a box three metres high, he has placed half a dozen candles of the finest quality, made, if we are to believe him, in all their thickness, from the purest beeswax.

These candles, called pontifical, were invented by him at the time of the promulgation of the dogma of the Immaculate Conception. Each candle is two and a half metres high, eight centimetres in diameter, and weighs fourteen kilograms.

More than two thirds of the candlesticks are decorated with oil paintings with gilding in the style of Zuccari. In the central part, the image of Mary shines, crowned with rubies and placed on a globe surrounded by two olive branches and lilies, symbols of peace and purity; Below, placed in an architectural niche, are each of the six prophets, Moses, Isaiah, David, Ezekiel, Jeremiah and Daniel, who more particularly announced the coming of the Virgin; finally, in the lower part, the coat of arms of Pius IX, in memory of the glorious dogmatic definition pronounced by His Holiness.

It is understandable that only in Rome and in the capital of the Christian world can one have the luxury of such candles. It is a long way from the crude smoky resin sticks that burn on the altars of many of our poor country churches.

Did the Imperial Commission not find the candles of Mr. Vincent Rigacci either large enough or well enough made that they did not seem worthy of any distinction? This must be due to the first or the second reason, unless, which would be possible, it results from both.

Fortunately for Mr Vincent Rigacci, he is in possession of an inalienable monopoly, and the jury's decision cannot affect his interests.

Mr. Dovizelli exhibited four photographs taken in Rome, in very large format; they are of Saint Peter's, the Vatican, the Colosseum and the Chariot of the Dawn of the Guide; all these photographs are magnificent in their execution and give the most accurate representation of these marvellous monuments, which time has already furrowed with deep wrinkles.

We owe to Mr. Dovizelli the complete collection of the Stanze, an admirable painted history of the Old Testament, in which Raphael's genius is at ease and shows itself in full.

When we say "we owe Mr. Dovizelli" we express ourselves badly; it is "Mr. Dovizelli owes us" that we should say; for these beautiful photographs are not to be found in the trade, and Mr. Dusacq himself, whom the author has chosen as his depositary, would like to know how they can be obtained and where they can be found.

You really can't get more Italian than Mr. Dovizelli. He made his photographs for fun; but to multiply them by means of clichés would be an occupation; and a Roman is not a man to submit willingly to regular work. And then, under the beautiful sky of Rome, idleness is so sweet!

Some people look for, and are astonished not to find, in the exhibition of the Papal States, those rosaries, scapulars, medals, ex-votos, enamels, and all those coquettish little stoupers of which the rosarii of Rome keep shop or green; let them not conclude from this that religious zeal has cooled down; all these objects of devotion, in the making of which Roman industry has given up, are now made in Paris and sent to Rome.

Chasubles, copes, dalmatics, banners, canopies, banners, Roman umbellines, all the embroidery, all the lace, all the church linen, alb, surplice, altar cloths that are sold in Rome, are still of French origin, and if we do not find any in the exhibition of the Papal States, it would be wrong to worry: Our industrialists will never leave the Roman clergy short, and when they want to do things right and pay the price, they will be able to display as much luxury and magnificence as in the past.

A Roman jeweller, Cipriani, has been awarded a bronze medal; we mention him, because he is now one of the most renowned heirs of Castellani, and these two names establish exactly the distance which separates the artists of old, or the masters, from their successors and pupils.

A bronze medal has again been awarded to the Roman University for its rock collections. A simple work of research and classification could not be more amply rewarded.

Messrs Bocedi and Co. received an honourable mention for their kaolins. The soil is rich, they have it exploited and derive a large product from their direction; this rigorously could be enough for them; but if a small distinction is added to their profits, they would be really wrong to ask for more.

The jury awarded a gold medal to the mosaic workshop in Rome as well as to the one in St. Petersburg: we leave it to the public to appreciate the difference between the skill and science of execution of the two workshops; but the jury was wise to decide thus: there are sunsets whose rays one contemplates with as much pleasure as those of the dawn.

Messrs Rubicondi and Martinori also each won a silver medal for their mosaics.

If the Romans complain about the Commission, which has shown itself to be benevolent and courteous to them, they will not surprise us: among them, as among their Italian brothers, independence of heart has always been the order of the day.

How is it that the beautiful cameos of G. P. Girometti have been placed in the historical museum? Is it because the former director of the Mint of Rome was prematurely taken from the fine arts, that the Roman exhibition was deprived of its most precious jewels, and that these masterpieces of contemporary engraving were transported to the archaeology section? We cannot explain this clumsy measure otherwise. But the unfortunate result for the widow whose only inheritance these four cameos are, is that visitors assume they belong to some Roman museum and that no buyer is forthcoming.

If they had been installed in their true place, near the window of the jeweller Cipriani, there is no doubt that they would have long since become the property of some rich amateur.

The entire table of honour of the Papal States has been surveyed: it is not rich in titles, and it can be said that without Fr Secchi, all these titles would not have brought it into sharp focus.

Glory, then, to Fr. Secchi! Glory to the Jesuit who, in the nineteenth century, made a public pact with science and came to protest, in the face of Rome, against the odious persecutions it had once suffered! Glory to him! For he avenges Galileo, the great astronomer of Pisa, of the avenges with which the Jesuits, his implacable persecutors, showered him!

Poor noble old man! Appalled at the appearance of the torturers who had been given to him as judges, he abjured the truth that had revealed itself to him; he betrayed it, they say, betrayed it!... At eighty years of age not everyone has the soul of Dandolo; and however convinced one may be, one is excusable for not finding in oneself, at this age, the strength to confess it.

He has not done enough for her by expiating
by three years in prison,
The unpardonable wrong of being right too soon,

and should he not have said to himself, in the secret of his heart, to console himself for the disavowal which was torn from him, that the truth, stronger than its persecutors, would sooner or later triumph over torture and the stake?
Yes, he had foreseen his triumph and his reign; and God, perhaps, manifesting Himself to him during his glorious martyrdom, had revealed to him the hour when He reserved to raise up an avenger for him from the very bosom of his enemies.