Central garden from the mint pavilion to the main entrance hall 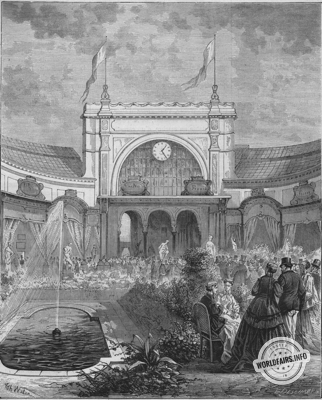 Let us put ourselves in the perspective of Mr Weber's drawing. First you see before your eyes Y Abel mourant, by M. Feugère des Forts, a marble statue, of a rather charming than beautiful character, which won a medal at the 1866 Salon. The group, also in marble, of Ugolin and his children, comes next.

I will not be naive enough to remind you of the verses of Dan te about the work of M. Carpeaux. The composition of this group was sent from Rome by the author in the last year of his boarding school at the Académie de France; and I am not quite sure that M. Carpeaux understood the poetry of Dante as well then as he would understand it today. It is, however, a work of merit. But M. Carpeaux has done better since.

The two marbles we have just mentioned occupy the middle aisle. In this latitude, on the left, there is a Colbert, about which it is best not to tell you anything, and the Sower of Weeds, a philosophical bronze by M. Valette, which is well done and gripping, which is a lot with such a subject.

On the right is the Corybante, a bronze by M. Cugnot; again a shipment from Rome, whose author has kept what he promised.

Let us return to the middle aisle, and stop in front of the Bull, by M. Vidal, neglecting to mention a marble group by M. Étex, which is not as stiff as Géricault's painting.

M. Vidal is a blind sculptor of thirty-five years of age; he lost his sight at the age of twenty, and since then he has only remembered what he has seen; and his fingers have become the intelligent and infallible interpreters of his impressions and thoughts.

Nature is infinite in its mysteries, and man is imponderable in the power of his faculties. How can we explain that the sense of touch can replace the sense of sight with such perfection? I saw in Antwerp a painter who painted with his feet very remarkable copies of the Descent from the Cross by Rubens. This can be explained; there is only one limb replacing another limb; but not one sense replacing another.

Once a Roman sculptor, having become blind, made perfect copies of his ancient works, and was represented as having eyes in his fingers. This can still be explained: the obedient hand was merely continuing almost mechanically the lines already followed.

But here, in M. Vidal, the miracle is complete. The fingers do not only have eyes, they have thought. The blind man not only grasps the proportions of an object, with its details and its whole, but also renders its physiognomy. The fingers have the inspired memory of things once embraced by a distracted glance.

This Taurus of which I speak seems to think for itself - and therefore to suffer. If it is not a masterpiece, it is at least a phenomenon.

The same can be said of his Wounded Stag, which is at the other end of the garden. It is a bronze that looks as if it is pulsating, so much pain and anguish in the expression of the poor dying animal.
When admiring the Stag and the Bull, especially the Stag, one might say: "How well one can see that the author of these masterpieces bears the melancholy of his infirmity! "Well, the plausibility of such a diagnosis does not make it true. Mr. Vidal is, I am told, a young man, pale and blond, it is true, but with singularly lively features, and who goes before him, all cheerful, with his cane in his hand, as if he hoped that he would catch up with his sight.

I have always noticed that the blind* are more cheerful than sad, but that it is rare for a deaf person not to be a hypochondriac. Explain this phenomenon to me, too, by saying that a blind man still lives among men, while a deaf man is irrevocably separated from them.

There is a philosopher who said: "One finds reasons for everything; but the reasons one is obliged to seek are always wrong. "

Let us continue our review, after this digression. In the latitude of the Bull and the Shipwrecked, we find on the sides,- on the left the Saint John the Precursor, a bronze by M. Dubois full of inspiration, medalled at a previous salon, and belonging to the Musée du Luxembourg; the Agrippina, a marble by M. Maillet, also in the museum; Etre et paraître, an ingenious composition by M. Leharivel-Durocher, also in the Musée du Luxembourg; - on the right, Ariane, an excellent marble by M. Millet and the Virgil that we have reproduced and about which we would still have something to say after M. Octave Lacroix.

Between the works we have just mentioned is Joséphine, a rather beautiful marble statue by Vital-Dubray.

Would you like us, since we are there, to turn back towards the other side of the Garden, beyond the Pavilion of the Coins? First we find the Wrestlers, a beautiful group by M. Ottin, marvellously rendered in electroplating in the round by Christofle; then comes a Winner in a cockfight, by M. Falguière. This bronze, sent from Rome, belongs to the Musée du Luxembourg. The Martyrdom of Hypathie, a marble by M. Gaston-Guitton, follows. Around this line of statues are the Florentine Singer, a great medal of honour at the 1866 Salon, and the Narcissus, a medal winner in 1865. These two remarkable works, of which we have reproduced the first, are by M. Dubois.

Further on we find two marbles by M. Gaston-Guitton, also well done: the Waiting and the Spring.

Resuming our order of march, here is the Child with a shell, a very pretty marble by M. Carpeaux, then the Aristophanes, a bronze by M. Moreau, medallist at one of the last salons, the Chactas, a rather too classical marble by M. Gruyère, and the Madeleine, a marble by M. Chaterousse, also on a rather too conventional model.

The Andromeda by M. Carrier-Belleuse, medallist of 1866, is of a lively execution.

We are finally in the presence of Brian's Mercury, that beautiful unfinished thing, that truly ancient work interrupted by death, and to which a large posthumous medal was given in 1864.

When we have mentioned Mr Salmson's Dévideuse, we will have reached the end. Let us not forget, however, the bronze group by M. S. Dénéchaux, Jeune femme caressant sa chimère, on the side, on the left. There is also, by the same author, among the exhibitions of bronzes in the Palais, a Caesar writing his Commentaries, which we shall reproduce.

We have made this enumeration of the statues around the Central Garden, in order to show that we have the right to raise our heads, in front of the beautiful sculptural exhibition of Italy. Let us thank our draughtsman Mr. Weber for having provided us with this opportunity.