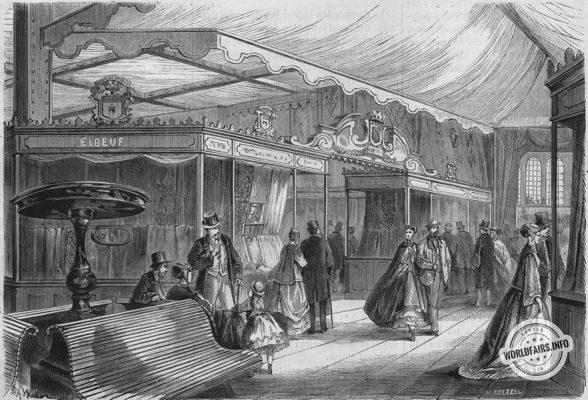 The Imperial Commission had originally set the number of gold medals at one hundred, which was too few; it then increased the number to nine hundred, which was not enough: but at the risk of being accused at first of improvidence and of incurring a more serious reprimand later on, it stubbornly clung to this last figure, even reserving the right not to reach it in the severe distribution of its graces.

She had counted on a maximum of thirty thousand exhibitors. To her great surprise, within a month of the opening of the admission lists, this number was exceeded, and the flood of applications, rising and rising, soon marked forty-three thousand on the scale of the Jena Bridge. Fortunately, it stopped there, and the level was established.

But what were nine hundred gold medals for such a large number of exhibitors? A little less than twenty-one medals per thousand or a little more than two per cent; a meagre reward, a more than petty crowning achievement, it must be said, for a competition to which the elite of the entire industrial world had been invited and in which they had hastened to register.

Faced with the figure set by the Imperial Commission, the jury of the awards became frightened; the task it had to perform seemed to it not difficult, but quite impossible. What account would it be allowed to take of the reports and conclusions of the examination committees? However favourable and imperiously formal they were, he could not make them the basis or, above all, the rule of his resolutions; otherwise the nine hundred gold medals would be exhausted before he had reached a third of his work.

What way could he imagine to get out of his predicament? Well convinced that he could not satisfy everyone, the jury was nevertheless anxious not to displease anyone; it must be admitted that in order to achieve this, he did his best, and, let us say it, he even believed, in a moment of sweet illusion, that he had succeeded.

By means of a bias which seemed to him ingenious, in places where groups were very important, he took the decision to include individuals in the masses and to subordinate them to the categories. It was, in fact, a way of undoing the economy of his gold medals, and of awarding only one by each of the industrial groups which represented the most numerous and notable individualities.

This is called attaching the cross to the flag; but it remains to be seen whether this was not a way of wounding the dignity of the chiefs, by flattering the self-esteem of the soldiers only very slightly. This is our opinion.

After an undeniable industrial success, this method of remuneration could only be unwelcome to the most deserving, the only ones who were directly affected by the parsimonious measure, for a modest manufacturer, whom the obscurity of his entourage could accidentally bring to light, had every chance of being better and more honourably treated. And this is what happened.

All the great industrial communities, the heads of the many factories of similar products, of the rich clothing houses, of the workshops of shawls, silks, flowers, finally the thousand swarms of which Paris, Lyon, Rouen, Mulhouse, Elbeuf, Louviers and so many other cities are the3 fertile hives, were considered as indivisible whole, whose parts faded and disappeared in the whole.
Thus, by citing here only three manufacturing regions, it will be easy for us to show how deeply our most flourishing industries have been damaged in their dignity by the measure of the Imperial Commission.

Let us proceed in order.

Here is Elbeuf, a vast cloth factory: there, every individual is a manufacturer: in the centre, in the smallest nooks and crannies of the town, on every floor of the suburbs, men, women, children, and old people, clean, card, spin, dye, prepare, and weave the wools of France, Spain, Italy, Germany, and Australia. Nothing else is seriously done.

Elbeuf alone had no less than fifty exhibitors, who were joined by twenty-seven of the most renowned manufacturers in Louviers. In all, seventy-seven, a most respectable figure. Well, for this enormous group, how many gold medals? Let's say it straight away: one, just one!

Now here is Sedan. - Everyone knows the rank that its factories hold in the industrial world. -This proud city, whose products Prussia and England are vainly trying to match, was represented at the Champ de Mars by ten manufacturers, chosen from among more than a hundred craftsmen, all of whom are masters of an industry which they have raised to the highest degree of perfection.

For these ten first-rate producers it was difficult to do less and impossible, we admit, to do more than for their colleagues from Elbeuf and Louviers; so we thought we were rewarding them appropriately by granting their town, or their manufacturing centre, a gold medal, which, given to all, seemed to have been deserved by no one.

England and Prussia were awarded the same number of medals for two separate manufacturing groups. A single gold medal was awarded to Austria, Russia and Belgium.

In all, nine gold medals were awarded to this industry, perhaps the most important of all, in this huge competition.

It is to be believed that the jury, so severe and so thrifty at the beginning of its distribution, found itself at the end embarrassed by the enormous quantity of gold medals which it had not used, because the winegrowers of all countries and the producers of all kinds of fermented beverages, beer, pale ale, scotch ale, etc., saw these medals rain down through their ranks like hail. It was like an unexpected shower of ninety gold medals, immediately followed by a heavy shower of two hundred and three silver medals, which was followed by a thick drizzle of two hundred and sixty bronze medals, which were slowly resolved into a mist of three hundred and twenty-nine honourable mentions.

There is no doubt that if the manufacturers of Elbeuf, Louviers and Sedan, instead of being in the first third of the exhibitors, had been classified in the last, like the manufacturers of fermented beverages, they would have benefited from all the reservations of the jury. So MM. Bellest, Benoist et Cie, MM. Flavigny frères, M. Chenevière fils, MM. Legrix et Morel, M. Cosse, MM" Decaux père, fils et gendre, M. Cosse, d'Elbeuf, MM. Bertèche, Chesnon, MM. Cunin-Gridaine et Christin, MM. Gollnisch-Labauche et fils, etc., of Sedan, finally M. Danet and MM. Gastine et Cie of Louviers, instead of the modest silver medal which was awarded to them, would have obtained the gold medals, which in the judgement of all they deserved, and which for lack of a suitable placement were awarded to MM. le comte Duchâtel, le marquis de Las Cases, le baron. E. de Rothschild, de Grammond, the Count of Vogué, the Count of Lespinasse and to eighty-two other winegrowers of the same importance.

We have only mentioned the three cities that rank first in the five manufacturing groups in France. In addition to Elbeuf and Louviers, the Normandy group includes Vire, Lisieux,
Romorantin and Caudebec, seat of a very active production; the group of Isère, Vienne, which twelve eminent manufacturers represent at the Champ de Mars; the group of the south, Carcassonne, Mazamet, Saint-Pons and Bédarieux, which provide us with all the common and low-priced fabrics. Let us also mention Bischwiller and Nancy in the Moselle group, and finally Châteauroux, the main centre for military cloth.

We would need four columns to properly appreciate the products exhibited by all the illustrious manufacturers who took part in the Champ de Mars competition: we would owe them that much to compensate them for their disappointment, but justice has already been done to them by the public, the ultimate judge, who always knows how to render to Caesar what belongs to Caesar.