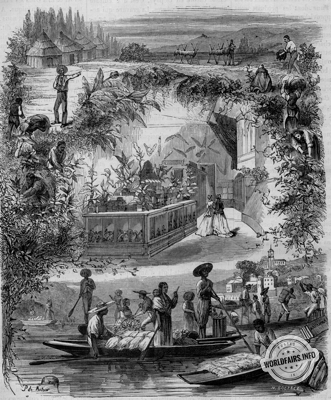 I sometimes hear it repeated that tobacco is very expensive and that the tax on it is a heavy burden on the people. These complaints are unjust, for of all the taxes that appear in the budget, the one borne by tobacco is the most legitimate: no one is obliged to pay it. Why smoke, why take snuff, why chew? Are these things so appealing, and would it not be better to abstain? I would add that tobacco contains a poison, nicotine, which always ends up being harmful to health, and especially to the intelligence, although it is only absorbed in infinitesimal doses.

It is not my aim here to repeat the history of this plant. I must limit myself to saying how it is cultivated in France and the advantages that it brings to the rural economy.

Alsace and Flanders are the two provinces where it was first cultivated. Its introduction dates back two centuries. Today, the two departments of Bas-Rhin and Nord are the largest producers of tobacco; they provide two thirds of the supply of the government, and they alone export leaves.

The soil, climate, cultivation and manufacturing give the tobacco its quality. The most esteemed in France is that of the Lot, very suitable for making powders, it is reminiscent of Virginia. The climate contributes greatly to the finesse of the product. The sun of the tropics gives Havana cigars the perfume that distinguishes them. Let us add that the climate is not everything, and that one must greatly take into account the manufacturing processes.

After the Lot, I must place the district of Saint-Omer (Pas-de-Calais), whose products are especially suitable for the manufacture of smoking tobaccos; they have some analogy with those of the Bas-Rhin. The leaves harvested in the lower Alsace region are very suitable for making cigars, but they must be mixed with superior types. What distinguishes them above all is the low price at which Alsatian growers can deliver them. With the rejects, the Régie manufactures canteen tobacco that defies any kind of smuggling.

Fertilisers still have a certain influence on the nature of the product. In Ille-et-Vilaine, where in the past a lot of smoking was done, only large leaves were obtained, with thick membranes that were difficult to dry and gave only imperfect tobacco. By reducing the amount of manure and planting more densely, all these defects were corrected. In the Lower Rhine region, growers used to take little care of their crops. Often, after the harvest, the crop was wet, more or less spoiled, and there were few leaves that were not damaged. Since then, the planters have become more diligent; they dry their leaves better, pack them more carefully, and in the end they deliver them better suited to the uses of the board.

It is also necessary to take into account the too frequent return of the plant to the same site. This abuse tires the soil, whose products are then incomplete; the wise law of crop rotation is not violated. It would therefore be appropriate for the administration to make its distribution from time to time on land that is still untouched; in this respect the products would gain in quality, and the changes would bring the administration into contact with cultivators whose education would be required. As the value of the product depends on the cultivation methods used, in order to avoid one disadvantage we would fall into another.

The monopoly that the government exercises over the sale of tobacco has led it to limit this type of cultivation; it is permitted only in a certain number of departments, and under the conditions expressed by the law of 28 April 1816. This law recognises two kinds of crops, one whose products are intended for the supply of the régie, the other for export. Numerous regulations set out the requirements to which planters in each of these categories must conform. These details would be tedious; but the fact remains that, in spite of all these obstacles, a good number of departments are in the process of applying to the administration for authorisation to cultivate tobacco.

This tends to establish that this plant can, with advantage, enter the crop rotation, and that it must play a useful role there. Since the commercial reform inaugurated by the trade treaty with England, agriculture has been in the process of transformation. Instead of producing wheat almost exclusively as in the past, the farmer must expand his crop rotation and enter the field of industrial plants. Tobacco belongs to this category and prepares the soil admirably for grain production. By increasing the yield of cereals, tobacco lowers the cost price of cereals, which makes it easier to compete with foreign crops. Therefore, the government must, by all means in its power, promote the cultivation of industrial plants and particularly that of tobacco. However, I repeat, as this cultivation entails constant surveillance, it must be confined within certain limits.

I may be told that if production exceeded the needs of the board, export would always remain the ultimate recourse. But export is only possible to the border departments, such as the Lower Rhine and the North. To go abroad, the leaves of these two countries have only a very short distance to travel; consequently, they incur very few transport costs. Would the same be true of the products of our departments located in the centre of the Empire? The costs they would have to bear are an obstacle to exporting; so the planters prefer to abstain. This is why the board burns each year the residues which are not of revenue. This is a loss from which no one benefits and which increases the cost price of merchantable leaves. But however hard this may seem, the law requires it and there is no way around it.

The Board uses only a part of the indigenous tobacco for manufacturing. It buys leaves from the southern United States, and cigars from Havana. Virginia and Maryland give products that blend very well with ours. Havana cigars have a flavour that suits our consumers. The company therefore has treaties with manufacturers on the island of Cuba, who are its suppliers.

Tobacco is grown on a very large scale on the island of Cuba. As slavery still exists in this country, it is a crop abandoned to the negroes. The engraving which accompanies this article represents the principal scenes. The most esteemed vintages are harvested on the banks of certain rivers which, each year, emerge from their beds and enrich their banks with repairing silt. Because of their origin, they are called tabaco dirio. At the western end of the island, the vuelta abago is harvested, which is said to be the nec-plus-ultra of its kind.

Tobacco growing and cigar making are the main wealth of the island of Cuba. Cigars are sold under the name of Havana, because it is in this city that the main tobacco factories are located, and from this port almost all shipments are made. According to statistics dating back five years, production was 500 million kilos. Exports at the same time were distributed as follows: Asia, 200 million kilos; Europe, 140 million kilos; America, 120 million kilos; Africa, 12 million kilos; Australia, 3,500,000 kilos.

France and Algeria supply the Régie with 35 million kilos of tobacco of all kinds. To these figures must be added the leaves, which it imports in fairly large quantities from the United States of America and formerly from Egypt, and cigars, of which those from Havana constitute the largest proportion. The Régie owns 14 factories in which tobacco is prepared. These factories sell their products to the warehousekeepers, who then distribute them to the tobacconists. The tobacco board gives the tobacconists a 15% discount on the prices they sell in the warehouses. The tobacconists can only sell at the prices determined by the laws and regulations. The gross revenue from tobacco exceeds 200 million; deducting from this sum the costs of purchase, manufacture and delivery to the warehousemen and tobacconists, the treasury is left with approximately 140 to 150 million, which is a handsome sum. There has never been a fairer tax, since everyone pays it voluntarily. If, with a series of monopolies like the tobacco monopoly, the State could make 2 billion in revenue, this would be for many economists the ideal financial mechanism.