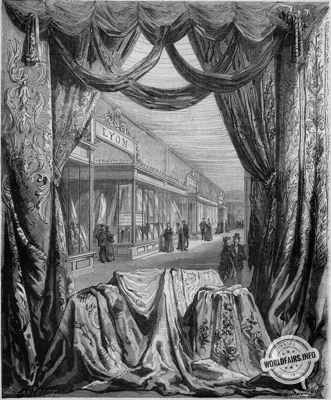 There are certain industries whose character and importance are so closely connected with the prosperity of the nation, that when any one of them falls into decline, its decadence affects not only the producers and the workers, but the nation itself.

The silk industry, more than any other, has won a glorious place in our national industry. For several centuries, it has given wealth and life to the second largest city in France; it feeds our domestic trade, and takes a place in our foreign trade that is envied by foreign competition, which is powerless to fight against the solidity of our dyes, the skill of our workers, the taste of our manufacturers and the inexhaustible fertility of our artists.

One cannot therefore consider with indifference the crisis which, for several years now, has paralysed the silk industry in France in general, and more specifically the manufacture of Lyonnais silks.

This crisis, which calls into question very serious economic problems, not only has the effect of causing immense damage to the interests of the city of Lyon, of ruining a large number of manufacturers, of spreading discomfort and even misery among a working population, but is also a threat to the future, because it can lead to the complete decadence of Lyon's manufacture and of the silk industry in our country. Also, as our editor in chief rightly said in his study of the rue de Paris, so rightly named by him the rue des merveilles, it is not without a certain tightness of heart that one admires all the marvels lavished by Lyon's industry in the double silk salon of the Universal Exhibition: "What! What! this magnificent art, says M. Ducuing, this art of Lyonnais weaving, which, to be brought to the point of perfection where we see it, required the efforts of the genius of mechanics and design, through so many generations that have passed on the secret; what! all this is going to collapse under the fatal level of time! Is this possible? And can no human intervention save this compromised industry, once and still today the glory of France?

What future is in store for Lyon's manufacturing industry? alas, we do not know, and we can only point out here the causes of the sad situation in which we see it today.

It is well known that the Lyon silk industry is made up of various branches and that its multiple products are used for many purposes. Thus, silks are used in furnishings, men's and women's clothing, shawls, scarves, ribbons of all kinds, luxury stockings and swimwear, curtains, trimmings, umbrellas and parasols, plush toys, etc. Silk is therefore a material which is used in a wide variety of applications.

Silk is therefore a material which lends itself to almost all uses and which, among the wealthier classes, replaces most of the ordinary fabrics woven from linen, hemp, wool or cotton. It is therefore the luxury fabric par excellence.

It is also known that silk fabrics are divided into three main categories: plain fabrics and velvets, brocades and shaped fabrics. The last two categories have been more compromised than the first; and this was to be expected, for they form precisely the most expensive part of the manufacture, the one that is used only for luxury and not for necessity like plain silks.

Having established these facts, let us examine the causes of the momentary or definitive decline of each of the categories of silk fabrics in recent years.

In 1862, that is, at the time of the last Universal Exhibition, the situation of the Lyons factory was still flourishing. M. Arlès-Dufour, president of the 20th class of the international jury in London, rightly congratulated himself on the growing prosperity of the silk industry in France and particularly in Lyons; he noted the truth that France, despite the rapid progress of foreign manufacture, was still without rival, either in the quality or in the quantity of its products.

Since then, many causes have influenced French production, not on its qualities, it must be admitted, but on its importance, and when we say French production, we necessarily include in the whole the share provided by Lyon, our main industrial centre in the silk industry.

The first cause of the crisis is the disease of the silkworms, a disease which, in some regions, has led to the abandonment of the education of the worms and has, almost everywhere, brought about a notable decrease in the yield and in the quality of the cocoons.

The decrease in the raw material has, on the one hand, made the supply very costly, and, on the other hand, the inferiority of this material has not allowed it to be used in any kind of work. The rise in the price of silk, the fall in its quality and the decrease in its quantity are already powerful obstacles; but these causes of decadence are joined by others which are their consequences.

Since silk is in short supply in France, it has to be brought in from abroad at a higher cost; from then on, the price of fabrics has to be increased and their placement becomes more difficult, especially abroad; moreover, not all producing nations suffer to the same degree from the effects of the silkworm disease; those whose education is spared are able to deliver fabrics of equal quality at prices lower than ours, and naturally French production is defeated and neglected.

These causes have acted more particularly on the finished fabrics than on the plain fabrics; also the Lyonnais export of finished fabrics has decreased by eleven millions from 1856 to 1865.

The general export to the United States, for the city of Lyons alone, has suffered an even more distressing failure.

In addition to these causes inherent to the material on which the Lyons industry operates, there are political, economic and social causes which have affected all luxury industries in general.

The American war, poor grain harvests, a financial crisis, and finally the German war successively halted the growth of all businesses; the silk and silk industry, already so tried and tested, was to suffer the repercussions of the European crisis more than any other.

Then, the taste for cheap and inferior furnishings, for ready-made clothes, for glitter without comfort, gradually took the place of other habits.

It cannot be denied that a kind of revolution is taking place in luxury goods. One no longer seeks luxury itself, one is satisfied with its appearances, one wants to produce an effect, but at a low price, and from then on one buys semblances, imitations, artificiality, mixed fabrics, and just as silverware has been replaced by ruolz, one tends to replace silk textiles and fabrics by the cotton fabrics of Rouen and Mulhouse.

Such are the general causes affecting the silk industry.

Let us now examine some particular causes specific to the Lyon area which further aggravate the situation.

The organisation of work in Lyon is defective and requires prompt reform.

The Lyon manufacturer has neither equipment nor workers. He gives hemmed pieces and weft to small industrialists who own one or more looms.

This is already a violation of all economic laws: excessive costs, lengthening of the work, sometimes failure to execute the manufacturer's orders, lack of supervision, unnecessary transhipments, etc. This is not all. And that's not all. The workshop manager, who receives the work at first hand and who, in fact, is a sort of contractor, has under his orders sub-contractors or journeymen, who operate the looms and take care of the work at second hand. However, the contractor, who takes no part in the work, will share with the subcontractor the price allocated by the manufacturer.

This multiplicity of cogs and intermediaries between the real producer and the buyer must increase the price of the article delivered to the trade by a considerable amount. Moreover, the manufacturer, the workshop manager and the journeyman are not bound to each other by any treaty, by any lasting interest.

The journeyman leaves one boss for another as soon as he finds that other boss a more advantageous remuneration; in turn, the workshop manager leaves a manufacturer as soon as he finds it in his interest to make one piece rather than another. This leads to delays and exaggerated price demands; it sometimes makes it impossible for the manufacturer to get an order filled, even if the order is of mediocre quality or quantity.

Such a state of affairs could not be established without causing great prejudice to the Lyon trade.

Manufacturers had to look for conditions more favourable to their interests, outside the Lyon area, and so they took their orders to the countryside, to rural workshop managers who, being able to carry out their work at lower prices than the workers in the city, managed to do a large part of the work which had previously been carried out by the Lyonnais canuts.
Let us add that this work of countryside, formerly limited to the plain fabrics, already monopolizes the shaped fabrics. The rural labourer gives the fashioned fabric at a lower price, but he makes it faded, a little undoubtedly, but sufficiently to make people prefer the English products executed promptly in well-assembled factories with a considerable staff.

Let us hope that men as intelligent as the Lyonnais, workers, manufacturers, merchants, among whom France counts European notabilities, such as Messrs. Arlès-Dufour, Brossette and others, will understand all that is defective in the regime whose defects we are not the first to point out, and that they will know how to modify the old practices, as has been done elsewhere for the working of linen, hemp, cotton and wool, with a view to fighting against foreign competition. Lyon has great capital and high industrial intelligence. Reform is not beyond its powers.

As for the silkworm disease, it is good to note that it has not existed in Algeria for some years, and Algeria is a French land like the communes of the Rhone valley. Mulberry trees are flourishing there. Already Lyonnais, Messrs Arlès-Dufour, Philippe, Ponson, Brossette, Gaillard-Germain and others, own large and beautiful properties in our colony. Let this example be followed by others, and soon Lyon will no longer be obliged to go abroad to find altered raw materials.

Let us say, in conclusion, that the engraving we are giving represents the showcases of the main exhibitors of Lyon's industry, in which the magnetic fabrics of Messrs. Schulz and Béraud, Lamy and Giraud, Laboré and Barbequot, Caquet Vauzelle and Côte, for shaped fabrics, mixed with gold and silver; Mathevon and Bouvard, for shaped furniture; Grand frères who exhibited curtains made for H. M. l'Impératrice; L. Vanel et Cie, for church ornaments; Sève et Cie, Jules Gautier, for velvets; Bonnet, Ponson, Million, for plains, etc.

Despite the criticism we have made, the Lyon exhibition attests that its industry, remaining perfect, can once again become prosperous.