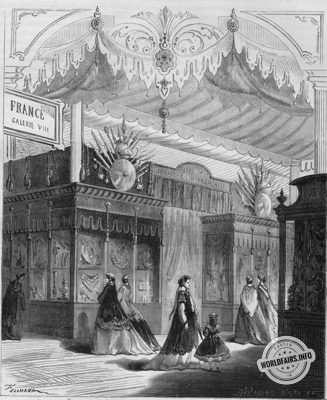 What graceful and charming words! How well they translate and paint the charming ideas they express! Jewellery! Which of all the arts brings so much wealth into play? Diamonds, pearls, rubies, these are the materials on which she works, the precious materials that serve to create her marvels. And what skillful magicians she keeps under her rule! They all hasten to obey her slightest whims, and to carry out her thousand fantasies.

The Baugrands, the Massins, the Leonniers, the Rouvénals, the Meller brothers, the Fonterays, the Boucherons and so many others, incessantly at work, invent and create everything that the imagination of the prettiest and most coquettish woman can dream up.

Under their fingers, precious stones are assembled, grouped and married to form these diadems, aigrettes, rivers and these marvellous ornaments which owe most of the brilliance with which they shine to art.

What riches and what masterpieces of elegance and good taste do all these eminent artists display before our delighted eyes! We do not know to whom to award the prize, and the jury, in awarding only four gold medals to the jewellers of Paris, has acted more with economy than with justice.

We have named a jeweller who is listed in the first edition of the catalogue and who is no longer to be found in the second edition, namely M. Lemonnier. Why has his name disappeared, and why does he only shine at the Champ de Mars by his absence? This is what the public is wondering, and what deserves an explanation.

As we do not believe that the discretion which, for reasons of convenience, may be required of the artist is obligatory for us, we shall deduce the reasons for this forced abstention. Mr Lemonnier is at least entitled to this compensation.

A few years ago, one of the greatest ladies in Spain had the fantasy of adding to her rich jewellery box a tiara and a necklace which, for the brilliance, elegance, lightness and finish of the execution, would defy comparison.

After having designed the tiara and the necklace, and chosen the most beautiful and purest brilliants, M. Lemonnier entrusted the task of mounting and setting them to his most skilful workers. What came out of their hands is not a double masterpiece, but a double wonder.

LL. MM. the Emperor and Empress, H.I.H. Archduchess Sophie of Austria, and Mme. the Princess of Metternich, who then honoured the artist with their visit, congratulated him most warmly, declaring that they had never seen anything so successful.

It was with a view to the future Exhibition that M. Lemonnier had applied all the resources of his art to the execution of this splendid ornament; for it had been well agreed between the great lady and him that the public would be called upon to sanction the high approval which the artist's work had obtained.

But on the day when M. Lemonnier arrived in Madrid and demanded from the great lady the execution of his promise, the Duchess of .... (I was going to name her) opposed the most energetic and absolute refusal to the request made to her, and gave as her reason that her finery would be deflowered by passing under the eyes of the crowd.

It is understandable that a noble Madrilenian should have such repugnance, or, if you like, such excessive delicacy. Only crowned heads are allowed to come into contact with the people without exposing themselves to an unfortunate compromise: The Queen of England, therefore, by delivering to the public admiration the greater part of the riches of her crown, has neither diminished nor diminished herself, and the Countess Dudley, following the example of her sovereign, has thought it possible, without derogation, to add her magnificent collection of diamonds, emeralds, sapphires and pearls, to the rich exhibition of goldsmiths' wares of Messrs. Hunt and Roskell of London. But a Spanish granddess has no such condescension, and she believes she must extend the cult of modesty to her jewellery.

M. Lemonnier, on his return from Madrid in the course of March, had to give up presenting himself in a contest in which he could only appear partly unarmed. Fortunately, his self-esteem was the only thing at stake; for, by right, he was out of the competition, having obtained in previous exhibitions all the distinctions that a great artist can aspire to, and moreover the cross of honour which is the dream of all.

In the windows of our jewellers, crowns and diadems abound, and it seems that, at the envy of M. Lemonnier and to compensate us for the deprivation that his noble client has caused us, everyone wanted to make their own.

The one that deserves to be singled out among all is an emerald and ruby tiara, enhanced with diamond rays, the work of M. Massin. It is difficult to dream of a richer and more splendid ornament, and to suppose that, as perfection of workmanship, art can ever go beyond it.

His showcase also contains a blue egret with diamond sprays, which is of the most exquisite elegance; a beetle holding a pearl between its legs, a work of remarkable originality; and finally, a diamond daisy with a sapphire bud, which a son of a family can give to his fiancée without fear that she will tear it off and question it.

The Meller brothers, who also won a gold medal, are not exclusively engaged in jewellery work; they are still renowned as jewellers, and the charming stoup purchased by the Empress proves that they even deal with artistic goldsmithing with full competence.

The most remarkable objects in their exhibition are a shell band of a single piece of silver, in the veins and cavities of which are set diamonds which produce the most shimmering effect; a cluster of acacia in brilliants, from which escape emerald seeds which sparkle in their corolla and must swing with as much grace as lightness at the slightest movement; a peacock feather, enriched with precious stones, the colours of which are harmoniously shaded around the central eye figured by a magnificent emerald.

The exhibition of Mr. Baugrand and Mr. Castellani consists of real masterpieces that deserve to be studied separately. It is not in a quick review that one can properly appreciate the objects that have come out of the hands of these two princes of jewellery.

The jewellers' main representatives at the Exhibition were Mr. Esni, of Stuttgard, Messrs. Duron, Fontenay, Rauvenot, Boucheron, of Paris, and Mr. Philips, of London.

With the exception of the first, who is out of the competition, all deserved and obtained the gold medal.

French jewellery holds a place in the world that no other nation can dispute: it has for it the substance and the form, that is to say the unquestionable quality and value of the material, for which any fraud is impossible, moreover an execution always perfect, thanks to the exquisite taste and the marvellous skill of its numerous workers.

Almost everywhere, the jewellery industry, which is not subject to inspection as it is in our country, uses gold of the lowest quality, and the export trade belongs exclusively to our manufacturers. English jewellery is only allowed in the English colonies; outside of these, it is so suspect that it is almost impossible to place it. This is the complaint of the few English jewellers who, like Mr. Philips, make it a law not to use their gold below the French title.

Foreign jewellers, in their impotent efforts to compete with our own, have, and for a long time to come will have, a lack, not of arms, but of skilful, practised, intelligent hands.

In England itself, enamellers, chisellers and jewellery engravers of recognised skill are few and far between, and cannot satisfy the needs of this great industry. London does recruit as many as it can from Paris every year, but those it enrols are students whose first education is impaired outside the only environment where industrial and artistic progress is possible today.

Nevertheless, thanks to the assistance of a few workers taken from Paris, Great Britain has obtained the second rank at the Exhibition, and whether one considers Mr. Brogden and Mr. Emmanuel Harry, of London, as manufacturers or entrepreneurs, it cannot be denied that they deserved the silver medal which the jury awarded them.

But why is it that Mr. John Brogden has turned part of his display into a thrift shop, by hanging up Prince Estherazy's ridiculous garment. The pearls on it are very beautiful, but that coat, jacket, and breeches of faded velvet are ridiculous; and I do not suppose that a Parisian jeweller, who had become the owner of this princely costume, would have made a trophy of it for exhibition.

The use of machinery in the manufacture of jewellery has greatly reduced the cost of labour, without impairing the perfection and finish of the work; but what has taken away all chance of success from the low gold jewellery of Birmingham, Frankfurt, Hanau and Pfortzheim, is our manufacture of gold doubloons. Indeed, in a few years, this new industry has been brought to such a degree of perfection that we no longer have to fear competition from the low-quality gold products of the English and German factories.
But although the jewellery of doubled gold is made by means of machines so marvellous that the sheets of rolled copper to which are applied, by soldering, blades of gold of a twelfth of their thickness are transformed into jewels without letting the existence of the copper be suspected, our manufacturers do not deceive anyone about the intrinsic value of the products which they deliver to the trade; They do not sell their copper for gold; and the United States, Brazil, Turkey, Egypt, Italy, Switzerland, Russia, Spain and even England always know with us what they are buying, and welcome our lined gold products as favourably in their markets as our richest jewellery.