Promenade of the Suffren Gate and captive balloon - Expo Paris 1867 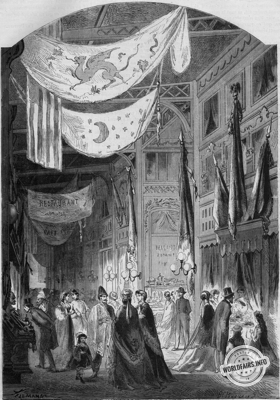 Do you want to know how the Promenade de la Porte Suffren, whose silhouette is depicted in M. Fellmann's drawing, became the most animated and noisy district of the Champ de Mars? We will tell you.

The whole semicircle of the Palais, which is reached by the Suffren Gate, open in the centre, is assigned to the exhibition of foreign nations: on the left, the United States and England, with the republics of the South and the countries of the East; in the centre, Russia and Italy; on the right, Spain, Portugal, Sweden, Austria and Northern Germany.

These various nations were allotted a corresponding portion of the outer promenade to display their "food in various states of preparation," an official style that translates into the vernacular as restaurants, cafés, and brasseries. The concessionaires of these sites, not having had to deal with the Imperial Commission but with the foreign commissioners, obtained much more lenient conditions than their competitors on the French side. It is true that they also did not have the advantages of access that the proximity of the Porte d'Iéna and the Porte Rapp gave the French concessionaires.

Perhaps it was to re-establish the balance between the French and foreign concessionaires that the Imperial Commission reserved the right to fill in with barracks the entire space between the Suffren Gate and the external promenoir, on the entire right-hand side of the small axis of the Palais, which measures 112 metres. These barracks, which were originally intended to be used as concert halls on the one hand, and for jury and committee meetings on the other, were gradually transformed into singing cafés and buffets. And that's not all: the two halls, thus transformed, have sown around them shops and four-penny gargots.

And this is how it came about that, opposite the luxurious restaurants of Russia, America, Spain, Sweden, and even Turkey, placed under the promenoir, one finds on the other side of the outer alley all the small-scale tenant industries, which display their glitter with great noise, and these little boilers in the open air where the goose roasts under your nose and where the barrier wine lavishes its purplish streams.

Well, do you want me to tell you? This is really where the noisy gaiety and the liveliness and the life of the Champ de Mars are. All these noises composed of Spanish castanets, Arab drums, Parisian cornets, rubber musettes, nightingale gurgles obtained by glass tubes plunged into water; all this glittering at the shops, all these strong scents of blue wine and pastilles from the seraglio, all this coming and going of a crowd as curious as it is altered, - this joy, this noise, this brightness, end up by carrying you to your head and intoxicating you.

That is what you will no longer see, even at the barrier; for, since the annexation, the barriers of Paris have melted like the snows of yesteryear. There is nothing like it, even at Saint-Cloud on fair days, even at Saint-Germain at the fêtes des Loges. If Iron Helmet and the guillotined man had taken up residence on this side, the head would be complete: nothing would be missing, not even the trestles.

There is only Paris in the world where the spectacle of this fairground show can be given. Master Rabelais, who has seen such jokes, would applaud this one: it is lively and cheerful. Nothing is more Parisian, I tell you, than this area of the Champ de Mars supposedly reserved for foreign dealers.

You will see there at this moment all the samples of our departmental population. If ever there was a democratic exhibition, this is it. The whole contingent of universal suffrage is marching through the Champ de Mars. And if one knew what the French peasant consumes this year when he sets out, he who is usually sober! You must see!

Still in this season that an early winter threatens, and where the days are so short, do you know that the workers' restaurant receives up to 8000 consumers? And you must think if the gargols of the Suffren Gate are a tough competition to this popular restaurant! Also, while the other districts of the Champ de Mar are emptying, the Suffren district is filling up. In the light of the gas, the signs spread out, the floating banners, the shops for all to see, all this presents an aspect made more striking by the noise.

There are, as I said, opposite the fairground shops, foreign restaurants where all the cuisines of the world are tried out by curious consumers.

If all the contemporary literature had not, for a few days, been struggling with the menus of the illustrious Dr. Véron, I would venture to give a little course in comparative cuisine. But I have to give it up, fearing that I will come across as an imitator of the literary fashion of the day. Since I have not been able to anticipate my colleagues on this subject of high taste, let us resign ourselves to not following them. The opportunity was good, however; let us think no more about it.

I cannot, however, leave the Porte Suffren without telling you about the captive balloon, its ethereal neighbour.

The captive balloon is, with the Édoux lift, the great distraction for visitors to the Champ de Mars. Friend Nadar should give a bonus to the captive balloon, in that this curious experiment demonstrates to the vulgar that one can go up in the air without experiencing the effects of vertigo, which will decide many people to entrust themselves to a free balloon.

The captive balloon at the Suffren Gate is almost as enormous as the Giant. I do not know exactly how many cubic metres of gas it absorbs; but its inflation required an expense of 5000 francs.

One is obliged to deflate a free balloon to make it descend, besides the fact that it undergoes differences in dilation according to the latitudes
atmospheric latitudes it crosses. The tethered balloon, on the other hand, retains its gas, so that its inflation represents an expense of establishment once made, and no longer an expense of exploitation always renewable with each ascent, as with the free balloon.

To obtain this permanent inflation, it was necessary, so to speak, to isolate the gas from all atmospheric influences. The envelope is made of linen thread, and is very strong; it can resist the pressure of 3000 times its volume; for added precaution, it is protected externally by a layer of liquid rubber, which a cotton cloth makes adhere to the first linen envelope. The result is a varnish on the surface of the balloon, which is a kind of vitrification, equally resistant to humility and the sun's rays.

The balloon is attached to a 300-metre long cable, which is wound on a capstan to ensure that the balloon rises and falls. This cable, which is conical in shape, decreases in size as it unwinds, in accordance with the physical law that any ascending body measures its resistance in proportion to its gravity. This is why, as the balloon rises, the cable is seen to relax and form an ellipse, which proves that the tension at the bottom decreases in proportion.

The ascent, as we can see, presents no danger of expansion or breakage, which had to be demonstrated for all the people who might be tempted by a trip in the air.

The industrialist who devised this pleasant method of ascent is, I am assured, an honourable tailor, supplier of pulleys to all our theatres. I do not know if he is related to one of our engravers, Mr. Yon, whose name he bears.

I said that the cost of inflation, once paid, was 5000 francs. But by putting the water vapour in contact with incandescent iron which absorbs the hydrogen in the process, we obtain pure gas at ten times less cost. So much so that a captive balloon the size of the one at the Suffren Gate can be inflated for a mere 500 francs. If we add the purchase of the rubberised canvas and the cost of the cable and capstan, we can see that the public will soon be able to enjoy the emotions of a trip in the air - and without risk - at very little cost.

It is true that the gigantic condor needs a cage. If M. Haussmann would be willing, to the great joy of Parisians, it would be easy to find a location closer than the Champ de Mars, on the Champs-Elysées, for example. Naturally, the owner of the balloon at the Porte Suffren has already received proposals from London.

One day, an Arab chief did me the honour, which I refused, of inviting me to a lion hunt. The happy owner of the captive balloon did not do me the same honour as the Algerian caïd, which does not prevent me from applauding his fortune.