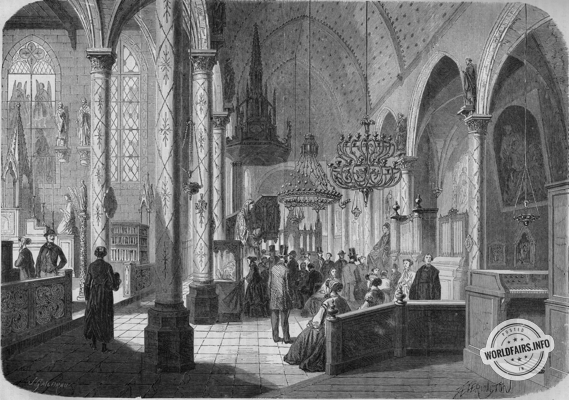 The chapel.... of the Champ de Mars? Singular antithesis, isn't it? But isn't the Exhibition itself, this peaceful solemnity, this celebration of the federation of peoples on a site devoted to the exercises of war, an even greater antithesis? So let us not dwell on these contrasts of detail: they abound in the Palace and in the Park.

If we wanted to stop at contrasts, we could cite many others, such as the one between the chapel and the temple on the Champ de Mars, between the Catholic church in the French quarter and the Protestant church in the English quarter. In the latter there is no luxury, no statues, but constant prayer, the alms of the Gospel distributed free to all, doors always open to the crowd, the divine book, the Bible, given out in thousands of copies; in the former the luxury of altars, all the ornaments of worship, statues, gold, smoking incense, streams of harmony, a whole that cannot be seen unless one pays; in the former the spiritual life, in the latter the life of lithurgical pomp.

It is true that the chapel of the Champ de Mars is not dedicated to religious worship, but the crowd ignores it, and the common man who stops in front of the turnstiles of this church, and who backs away because he has to pay, wonders why this difference between the Protestant temple which asks for nothing and gives much, and the Catholic chapel which asks for much and gives nothing.

The Catholic religion is therefore guilty in all this only of imprudence, it must be admitted. It should not have allowed a right to be established at the door of a building which almost all visitors believe to have been erected by religious hands and dedicated to worship, or it should not have tolerated that some speculation, in order to make its products worthwhile, should enclose them in a building in the form of a Catholic chapel.

Having said this, and leaving aside the question of religious propriety, we can only applaud the happy idea of enclosing a series of products in the very premises for which they are manufactured. There is in this very new arrangement the starting point of an excellent mode of classifying products in future exhibitions.

It is true that the Universal Exhibition of 1867 leaves all those that preceded it far behind: who can say, however, that it could not be done better, and that the future does not yet hold in store greater surprises and more admirable wonders?

Instead of this cold classification, of this painfully obtained order which so often resembles disorder, instead of these long galleries, enormous bazaars where everything is gathered from the most delicate jewel to the most gigantic machine, from the pin to the locomotive, why should we not have palaces in which all the parts are diverse specimens of industry? The walls, the roofs, the railings, the stairs, the doors, the hangings, the mirrors, the carpets, the furnishings. One would thus pass from the living room to the bedroom, from the dining room to the kitchens, from the cellar to the attic, and everywhere in one's steps, one would encounter the piece of furniture or the object exhibited in the very environment for which it is suited. Railway apparatus would be displayed on special small railways, gardening objects, flowers, in parks, etc., etc., etc. .... The Exposition of 1867 made a few attempts of this kind, and the most complete one is undoubtedly that of the chapel.

To M. Ch. Levêque is due this attempt, which was only half successful.

I say only half happy, because Mr. Ch. Levêque had not only resolved to build a chapel to show all the objects that must contribute to worship in the very environment that suits them, he had drawn up the plans for a vast church: but great difficulties came to hinder his work and make it incomplete.

We do not need to go into the details of these difficulties.
Let us note the result. The church remained unfinished; only the chevet was fully completed, but half of the nave fell into the water.... of the nearby lake, which extends, indeed, over part of the space originally reserved for the church.

Mr. Brien is the architect who conducted the work on this construction, all the parts of which, both exterior and interior, are specimens of industry, so many products on display.

The masonry, the paths of the cross embedded in the wall, the roofs, the plumbing above it, the doors of the chapel, are all on display.

At these doors, two men placed in front of the font appear, at first sight, to be specimens of holy water givers, but they are not; these men, instead of offering the goupillon, hold out their hands to receive ten pennies.

After the turnstile, we enter the nave. It is Gothic, but the chapels, which radiate around the chevet, are built on different plans, in order to allow the various styles of decoration employed by the church to appear in the special environment which suits each of them. This diversity of styles is quite well managed and does not disturb the view.

What shocks the eye a little more, if not the mind, is the spectacle presented by the chapel, under whose vaults the conversations of the visitors resound, the altars all set up with signs near them indicating the prices; one may say to oneself that one is, after all, only in a hall in the form of a church, but the imagination is no less struck and as if offended.

But once again, let's leave these considerations aside, and let's go through the various chapels grouped around the nave, if you will.
First of all, we are walking on an exhibitor or, to put it another way, on his products, we have at our feet ceramic tiles of various shades and types, here is another mosaic tile, the tiles follow one another and are not alike. There are some rather ugly ones next to some others which seemed remarkable to us and, for example, those of Mr. Bonnet, from Rouen. Here are still on our heads and near us murals executed by Mr. Emile Lucas. The ensemble of these paintings seems to us to be quite happy.

Most of the art objects relating to the Catholic cult in France seem to us to be tainted with bad taste, and we will cite some evidence of this in the church of the Champ de Mars itself.

In the first chapel on the left there is a grotto in rockwork surmounted by Our Lady of Pity. This grotto contains the entombment of Jesus Christ, which includes nine life-size figures. The pose of these figures does not seem happy to us, and despite the true expression stamped on the figure of the Virgin Mary, we cannot praise the composition as a whole.

But what is this saint and this martyr lying under glass frames? What is this art, not to mention the impropriety of these affected, theatrical poses in two saints who are to be offered to the veneration of the faithful? They are wax figures without expression, as bland, as faded as those used by hairdressers and displayed in their shop windows.

We prefer the Virgin of M. Froc-Robert, executed after a fresco of the Trinità del Monte, in Rome. The Virgin is seated next to a stem of fleur-de-lis, an emblem of innocence and beauty, Mary's hand is turning a spindle; the pose is graceful and noble, the face admirable.

Here are the 100-franc organs of M Alexandre. Real cheap masterpieces that the poorest parishes can afford, and which can suffice for their religious ceremonies.

Further on, we notice a beautiful altar in carved wood, in the style of the eighteenth century. It is exhibited by M. Aubry, a sculptor in Guespunsart (Ardennes).

Messrs Barbezat, Ducel and Durenne, who are to be found in so many places in the Champ de Mars, still have a large number of products in the various parts of the chapel; we noticed above all a beautiful altar in the style of the thirteenth century, exhibited by Mr. Durenne, and its magnificent choir screen.

Continuing our examination, we find still to be pointed out beautiful ornaments, such as chasubles, crosses, banners, banners, exhibited by Messrs Biais and Rondelet. All these works of great richness are drawn with taste.

Here is a large and beautiful chandelier with 72 crystal candles. The ways of the cross are numerous, but generally copied on the same model and not very remarkable.

In a small glass frame is a small ivory Christ, the only antique object in the chapel. It is a beautiful sixteenth-century work.

Candles and wax candles have been placed on the tips of the choir railings and in all the altar candles. It is known that this production occupies special houses and that some churches consume a prodigious amount of wax, most of which is offered by the faithful. The Halbout house exhibits all the types prescribed either by the Roman or the Parisian rite; one sees in the chapel all kinds of candles, from the immense Paschal candle to the small candle that pious people burn in front of the statues of the saints.

Here is a very beautiful pulpit made of carved oak wood from the workshops of M. Klein, in Colmar.

Here is another Gothic altar in white marble worthy of being seen.

Let us notice some incense burners, missals, breviaries from the house of Lesort, finally large and beautiful stained glass windows exhibited by several manufacturers, stained glass windows by M. Husson, representing the Presentation of the Virgin in the temple, appeared to us to be of a marvellous brilliance and of a beautiful composition. Moreover, M. Husson has filled the churches of Paris with his magnificent works; it is sufficient to cite his stained glass windows of Notre-Dame, Saint-Germain l'Auxerrois and the Sainte-Chapelle, which everyone admires.

But let us not leave the Champ de Mars chapel without giving thanks to M. Cavaillé-Coll. His organ, one of the church's greatest attractions, enchants visitors with its harmonious sounds that keep them under the dark vaults of the temple for a long time.

The organs of M. Cavaillé-Coll have long since acquired a great and just fame. Several churches in Paris, many cathedrals in the provinces and the richest churches abroad are in possession of the magnificent instruments of this builder, for whom all the awards have been exhausted; he received the great medal of honour at the Universal Exhibition of 1855.