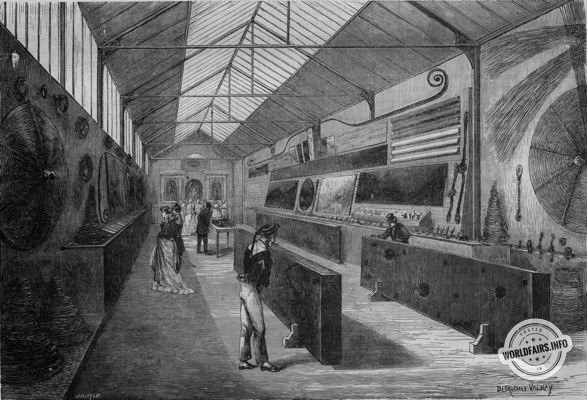 The Compagnie des forges de Châtillon et de Commentry has built a special pavilion in the park, to the left of the main entrance to the Pont d'Iéna, where it has assembled samples of its many products. Nothing could be more interesting than this exhibition which introduces you to all the progress made in France by the metallurgical industry.

The back of the pavilion, leaning against the quay, is formed by a monumental assembly of the principal samples of sheet metal and profiled iron which reproduces exactly to half size the Medici fountain of the Luxembourg garden; two Florentine statuettes placed in the two lateral niches, two Medici vases placed on the corners of the pediment, complete the monument; two bas-reliefs in Commentry sheet metal embossed with a hammer by M. Bodard, represent one of the miners, and the other a forge with wood.

The four columns of the monument are ingeniously represented by the various types of rails, angles and small glazing bars. On the tympanum that surmounts the pediment is applied an embossed iron escutcheon with the names of the five provinces in which the Company's establishments are located. Finally, at the bottom of the large central niche, there is a very curious rocaille made up of coal, cokes, cast iron and irons, property of the Company.

Between two plans in relief representing the metamorphic site of the iron mines of Thostes and Beauregard and the coal mine of Benezet, an iron pedestal table has been placed, whose table is made of forged sheet metal, folded and corrugated all around, and covered with a stamp and vases of embossed sheet metal; And further on, near the entrance door, are two armours, one of which, unrolled, twenty centimetres thick and nearly five metres long, weighs seven thousand kilos; the other, fifteen centimetres thick, drilled and adjusted, has been subjected to the test of the gun.

To the right of the monument, the Company has set up showcases in which it has displayed collections of cold and hot breaks and tests, cast irons and irons, samples of all tin irons, bright irons, dull irons, and black irons, of thin sheets, leaded and zinc-coated, polished and buffed, of all numbers of wire and all varieties of puddled and forged points.

Near the entrance door is a frame containing ten sheets of black, extra-thin, polished iron, on which are inscribed the names of the Company's personnel.

There are few richer and more interesting exhibitions in the Park, so the pavilion of the Société de Châtillon et Commentry is filled every day not with curious people, but with intelligent visitors who marvel at the diversity and perfection of the products of this Company.

Its success in the huge competition held at the Champ de Mars was most striking: it obtained the first gold medal for its metallurgical products, another gold medal for its mining processes and equipment, and finally an honourable mention in the separate order of awards instituted in favour of establishments which have best maintained and developed good harmony between all those who cooperate in the same work, and ensured the material, moral and intellectual wellbeing of the workers, against any unfortunate eventuality.

It is divided into six departments which employ a total of nearly nine thousand workers in their mines, factories and workshops.

In all the places where the workers are concentrated, the Company has set up relief funds, ensured the education of boys by subsidising lay or religious teachers, and the sisters of Saint Vincent de Paul for the education of girls; finally, it has completed this set of charitable institutions by founding a medical service which is duly paid.

In addition to these first means of ensuring the material and moral well-being of its workers, the Company also provided them with a certain amount of free or reduced-price housing and gardens, wood or coal heating, and a very large number of bread ovens.

In addition, it has made itself the cashier of its workers: it receives their savings, pays them interest or adds a preferential interest to the capital every year.

The Company, always looking for new ways to improve the lot of the workers, hopes to do even more for them than it has done; also, workers and bosses consider themselves to be in solidarity, and the ever active and paternal benevolence of the one is paid for by the absolute devotion of the other.

The three awards obtained by the Company, which this brief report explains in abundance, are, in the eyes of all, nothing but an act of rigorous justice on the part of the Imperial Commission.