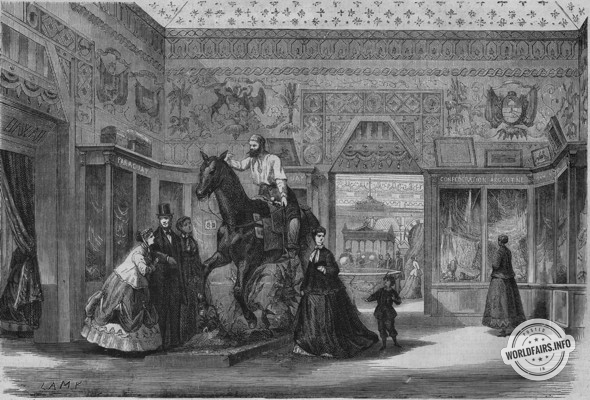 It is on the Avenue de Suffren side, in the most picturesque and eventful part of the hemicycle, that the Argentine productions are gathered.

There are grouped together the various specimens of the country's wools, an essential element of its prosperity; the assorted skins and worked leathers of the natives; the fossils of M. Seguin; and finally, the samples of the country's products. Seguin; and finally, the mineralogical specimens of San Juan, Rioja, and Cordova; - metallurgical riches, sensed 300 years ago by the bold navigator Diaz de Solis, when, at the glittering aspect of the immense stream where Buenos-Ayres now stands, and at the sight of the rich silver ornaments with which the Indians were adorned, he cried out, "Rio de la Plata! "River of silver!

On approaching the South American sections, the visitor may take a little ordinary course in special geography, with the aid of a large summary map, in various colours, showing the boundaries of the various States, and showing the principal towns and railways of each.

The light-blue line surrounds those beautiful Argentine lands from which the names of the illustrious General San Martin, Belgrano Rivadavia and Bartolome Mitre are inseparable; the dark-blue line the small but rich country of General Flores, or Bande Oriental; the green line the fertile Chilean cradle of Bulnes and Prieto; the orange line the Paraguayan part of Dr. Francia and the two Lopezes.

The importance of these republics can be measured geographically, and the rapid and predominant growth of the Argentine Confederation can be easily explained, not only by its territorial development, which stretches from Buenos Aires to the Andes, a Pampean plain of 300 leagues, but also, and above all, by its situation with regard to Europe, which forms, across the Atlantic, the link between the old world and the new.

The Argentine Section is rich in local colour, especially the room which our vignette represents, and where are exhibited two of those Argentine peasants of whom a too famous son of the country used to say to Captain Page: "Give the first gaucho that comes along a spear, a poncho, spurs, and a saddle, and there is a soldier. "

In another room, where the two clasped hands of the beautiful and male Argentinian symbolism stand out against an azure blue background, through the South American escutcheons, are spread out colossal jaws of animals petrified under the hand of the centuries; a glyptodon carapace, which gives an idea of the enormous development of these toothless people whose kind no longer exists; The remains of a fossil horse, which offers to science the remarkable phenomenon of differing, as a species, from present-day horses in several anatomical characters; the American megatherium; many other telling debris which bring to mind the current of generations; the wreckage of a vanished world; a history without annals, but not without evidence, found on the flanks of the Cordilleras and on the banks of the Argentine rivers.

As for the exhibitor Mr. Seguin, by attaching himself, like the octopus, to the Argentine soil, both in the vicinity of Buenos-Ayres and on the coast of the Rio Salado, he has succeeded in reconstructing large animals of inestimable antiquity, and has thus set up, from a special point of view, the frontispiece of Argentine natural history and geology.

When one has admired - a masterpiece of skill and patience - the hand-embroidered fabrics of that province of Tucuman which, richer still in nature than in art, has been called "the garden of South America;" the leather saddles and silk ponchos of such beautiful workmanship ; the rich fleeces of Juguy and Catamarea, requested by our Conservatory of Arts and Crafts; after stopping in front of the collections of medicinal and usual plants peculiar to the country; the samples of tobacco, in manioc or in cigars; the sugar cane; the beeswaxes of Mr. Liberio Molina and those sent by Mr. Liberio Molina and those sent by the Government; the sheep's fleeces of Messrs. Hannah and Newton; the splendid and picturesque gourds, called chi/les, formed of an ox horn, and which travellers make use of when crossing the mountains or during the long journey over the pampas; The Argentine woods, distinguished among so many other delicate and rich woods of American origin, which are used for cabinet-making, carpentry, and the tanning of hides, and which, in this last respect, do not fear, said the Revue des Deux-Mondes, the competition of any country; the marbles of Mendoza; the ores of MM. Lafone, Rickarde, Rocques frères, Klappenbach: gold, silver, copper, lead, iron, nickel, tin, rock crystal; finally, the elegant geological collection collected in all the provinces by M. Martin Moussy, who has made, in the last few years, an important contribution to the development of the country. Martin Moussy, who has made a twenty-year journey in the estuary of the Plata, and from this journey a book, and from this book a descriptive encyclopaedia, justly esteemed when one has seen all these marks of a prodigious climate, of a growing industry and of a conquering civilisation, there still remains, for those who are concerned with questions of the social future in this continent, an exhibition of real interest to contemplate.

It is about Argentine meat.

America, by giving the potato to Europe, has prevented or alleviated great evils during our national famines, and the use of this tuber has dominated the abstract deceptions of science with all the active pre-eminence of the practical interests of humanity.

It is in this superior capacity that the processes of preservation applied to Argentine meats have fixed the attention of special juries.

The natural prairies of the Confederation, with its territory four times the size of France, contain an innumerable stock, the heads of which are counted in millions, and which reproduce infinitely: To find the means of bringing, across the Atlantic, these meats of the Plata from the Argentine matanzas to the markets of the old world with all their nutritive conditions, and almost in the state of fresh meat; to generalize their use on our continent, whose exhausted populations would promptly feel the benefit of a substantial, economical food, and all charged with the fortifying emanations of the American campo, is a care whose idea cannot be too much applauded, nor too much rewarded for success.

So thought the jurors of Class 70: in the distinctions awarded to Messrs Beth and Huebler, Thomas Oliden, Guillermo Müller. Demaria Aliba and Morgan, they wanted to encourage a first progress, but above all the thought and constancy that produced it.

Such is, as the crow flies, the Argentine exhibition. Its honourable president, the Argentine minister, Mr. de Balcarce, in pointing out to his government the usefulness, for the Republic, of not being left out of this great meeting, and the special commission which was set up in Buénos-Ayres, under the presidency of Don Juan M. Guttierrez, rector of the university, and of the indefatigable director-general of the Post Office. Mr. Posadas, took the most fortunate initiative. The Argentine Confederation, in fact, has received its card of nationalisation in the peaceful congresses of the future by the awards it obtained from the international congress of 1867, which, amounting to forty honourable mentions, or bronze, silver and gold medals, form more than a third of those awarded to the South American States.

These laurels of peace and labour will be justly appreciated on the other side of the Atlantic. France, too, will not forget that the Argentine Confederation was the first to send its products to this cosmopolitan gathering, where the genius, the needs, the resources and the aptitudes of each nationality are revealed for the benefit of common progress, and it will repeat, with one of its most competent voices: "That the Argentine Republic has well deserved the Exhibition. "