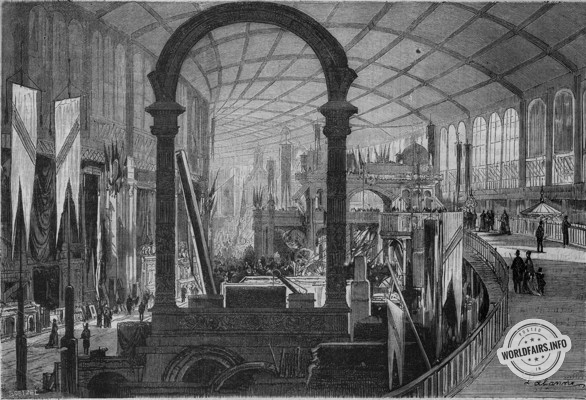 Brother Jonathan after John Taurus, his elder. We do not leave the Anglo-Saxons. Still the same inventive spirit with more boldness.

The movement is given to the whole section by a very beautiful French machine by Flaud, with two inclined cylinders. It only won a silver medal, which is not much.

The American machine of Corliss, which works next to it, was better shared. It deserved the gold medal it received for the novelty and excellence of the steam introduction and exhaust system. This system consists of replacing the drawer with taps which are much quicker to operate.

The Americans, serious and practical people, are great enemies of glitter, but they make an exception for their machines which they decorate like jewels. The Corliss machine is silver and gold on all sides.

We have seen a tendency to use water pressure machines; we can also see that rotary steam machines are numerous at the Exhibition. England has the Thompson and Hill machines, America the Behrens. They are based on this principle: instead of giving a piston a to-and-fro movement by steam (transformed into a circular movement, by means of a connecting rod), produce directly the rotary movement of the piston on its axis, which avoids dead points, does not shake the building where the machine is located, as does the stroke of the piston, and eliminates the destruction of acquired force which takes place at each reversal in the direction of the sliding of the piston. The construction of such machines has been sought for a long time, but it is hardly until this year that it seems to have been achieved.

American machine tools are quite ingenious. Notice these machines that make machines, for example this tool for making carding machines, that is to say, belts bristling with iron spikes, a kind of brush, that comb cotton. This little machine cuts and lodges three hundred iron spikes in the leather per minute.

On the other hand it is a machine that cuts wood with such precision and speed that in four movements you have a solid box, almost a piece of furniture. Elsewhere a miniature oscillating steam engine, as big as a man's hat, raises 4000 litres of water per minute with the help of a centrifugal pump.

Reduced by the abundance of subjects to the use of telegraphic style, we do not know what to quote. A word more about the tunnel, dug under Lake Michigan, for the supply of the city; this underground canal will collect, three and a half kilometres from the shore, pure water, and not mixed with sand as it is near the shore.