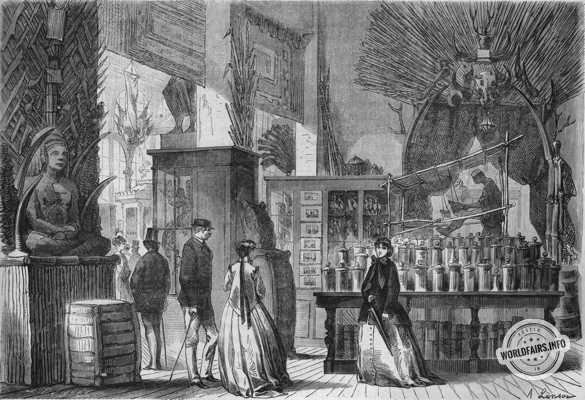 Adjacent to Algeria over the whole length of a sector, the French colonies had to combine their riches into a single exhibition, despite the great differences between them, in order to comply with the programme. The personality of each one is thus a little too effaced; but with a little research one manages to recognise it.

Starting with North America, Saint-Pierre and Miquelon, two sad and cold islets, redeem their small size by the activity of their inhabitants, who are joined by numerous sailors from France, when the ice begins to melt, at the awakening of spring. There, all the existence is fishing, it is the cod! The schooners that set sail for Newfoundland, equipped with their tackle, their lines, their crews, are represented here in miniature, but faithfully; framed in nets that unfold in transparent curtains and elegant doors. To the flesh of the fish consumed by the people of both worlds, the pharmaceutical industry has for some years now added cod liver oil, brown or clarified, which has rapidly become, in Saint-Pierre, as in Newfoundland, the object of an important trade. Jars of all shapes show it in all its shades.

In the tropical sea of the West Indies, Martinique and Guadeloupe courageously uphold the honour of French workmanship in the face of neighbouring and rival islands where the English, Spanish and Danish flags fly. To both of them, sugar has earned a gold medal, awarded to Messrs Guiollet and Quenesson, for Martinique, and to the Marquis de Rancougne for Guadeloupe. The separation into two distinct industries, the cultivation of the sacchariferous plant and the manufacture of sugar, carried out in the factories of our West Indies, prepares an economic and social revolution. From now on, the centres of perfected manufacture, where the machines of the Cail company are enthroned, obtain from the first jet powdered sugars of a brilliant whiteness, which can enter the consumption without passing by the refinery.

Torn from their ancient vogue by the ravages of hurricanes, by the whims of fashion and especially by the invasion of sugar cane, coffee, tobacco, cotton and cocoa had for some time been much neglected. Warned by the spectacle of the vicissitudes that befell their rival, they took courage and aspired to share its profits and honours. In the shops of the circular walkway, the public has been able to taste the preserves, jams, vegetables, and fruits of these privileged countries; and the names of Messrs. Guesde, Thébault-Nollet, from Martinique, and Mme Toutou te, from Guadeloupe, have acquired a real popularity among gourmets.

Still in America, but on the continent, Guiana shines above all in its beautifully dimensioned woods, admirable in their grain and shade, in varieties matched according to need, from luxury cabinetmaking to railway sleepers, to naval constructions. The gold-bearing sands of the Approuague are also noteworthy, of which we can see some pretty nuggets, the roucous with their bright red tones, the cottons, the cacao and the girolles. The herbarium of Mr. Sagot gives a glimpse of the richest flora.
From Cayenne, crossing the Atlantic, we approach Senegal. For several centuries, Senegal has lived on the trade of gums, which come from the bark of acacias chapped by the burning hermallan. Sorted and classified, they form assortments that enhance their value and mark their uses. For several years now, they have been associated with the peanut, a very oily seed, sought after for tanning.

In terms of novelties, we should note the fafetonne, a silky egret of the gigantic asclepias, remarkable for its brilliance and lightness, which combines perfectly with silk, wool and cotton, and takes dye very well. Cotton, indigenous to the country, as well as the indigo tree, has seen many attempts, up to now, which have not been very successful: next to them, ostrich feathers announce the proximity of the desert, and the jewels worked in Saint-Louis, not without art, by the black goldsmiths, reveal the gold mines of Bambouk, better known than exploited.

Among our establishments on the Gold Coast, Gabon stands out for its copal gums, its medicinal plants, its oils, its wood for dyeing and construction, whose growing trade, largely personified in the house of Régis, of Marseilles, replaces the odious cargoes of slaves that the barbarity of the traders describes, by an insulting metaphor, as ebony wood. The natural history collections of Mr. Touchard have been distinguished by a silver medal.

In the waters of the Indian Ocean, the island of Reunion shines like a flourishing oasis of greenery, formerly (and still today, in common parlance) called Bourbon Island, twin sister of that other Ile-de-France, sung by Bernardin de Saint-Pierre, unrecognizable under the name of Mauritius. Here, as in the West Indies, the cultivation and manufacture of sugar is the dominant, almost exclusive industry; unfortunately too intermittent a source of fortune, honour, and all the pleasures that the colony can give and those available to Europe. But, despite the disease which has been raging for several years on the cane, the colonists, far from deserting the struggle, have rivalled in ardour. The Savannah establishment won a gold medal, which was contested by many rivals, including Mr. Anicet Orré who won a silver medal. The same distinction was awarded to Mr. Alphonse Frappier for his potato starch and his coffees, these coffees of Bourbon, so renowned for the purity of their origin which goes back to the origins of Moka itself, and which, after having been forsaken for too long for cane, are regaining favour in the cultures of the planters. They flourish there alongside vanilla, cocoa, colon, tobacco, oleaginous fruits and foodstuffs of all kinds, which share the secondary roles.

As in all countries loved by the sun, where sweet liqueurs and exquisite fruits abound, Reunion has a large trade in preserves, among which those of Mr. Eugène Lacaze, which were presented in a wide variety of samples, were awarded a bronze medal. In Reunion, the culture of science, art and literature occupies or distracts the rare leisure time left to the mind by the activity of business. The photographs of Mr. Azema, the Album of Mr. Roussin, the naturalogical collections of Messrs. Lautz and de Cardemon were justly noticed by the jury or by the curious.

Closer to the great island of Madagascar - the eastern France of the seventeenth century - Sainte-Marie, Nossi Bé, Mayotte, extend, in the shadow of our flag, to the vicinity of eastern Africa, our colonial trade, represented by scales, waxes, rice, oils, wood, with which sugars attest to the work of civilised man complementing that of nature. The name of Mr. Lambert, which stands out on several samples, if it is that of the Duke of Emyrna, recalls the energy of struggles and hopes.

On the Asian continent, French India has more ancient and imposing traditions to preserve. Here, sugar fades away to make way for other products of the soil and climate, of agricultural labour and manufacturing industry. We are in the domains of indigo, rice, oil seeds, painted cloths, called guineas, because they are intended for the inhabitants of Guinea and Senegal, where they are used as clothing and money. The names of Messrs Perrotet and J. Lépine, honoured with a silver medal, recall the laborious and learned research undertaken for the benefit of sericulture, acclimatisation, botany and the pharmaceutical art.

In the nascent colony of Cochinchina, the Annamite race is affected by Chinese positivism; the madwoman of the house dreams little of divinities; the hand prefers to apply itself to more useful works; it guides the buffalo in the rice fields; it weaves sole, cotton, and china-grass for the family's clothing; She guides the buffalo in the rice fields; she weaves sole, cotton, and china grass for the family's clothing; she drives the boats through the meandering canals and rivers that bathe the region; she prepares the fish to be dried; she chisels gold and silver for jewellery, and excavates and inlays with mother-of-pearl the furniture to be sold outside or to adorn the house.
To these works of the natives the European spirit comes to bring its processes and its advice; it collects with curiosity the debris of the ancient civilizations which, in unknown ages, reigned over the country; in the showcase of the liberal arts are seen paintings, sculptures, vestiges of architecture which make a singular contrast with the art without character of the present state.

In the middle of Oceania, the French flag flies over New Caledonia, over Taïti and its dependencies. In the first of these colonies, agriculture has taken possession of some parts of the soil only for a few years; its efforts are attested by coffee and wool. The trade in natural products is represented by oils, wines, tripangs, or sea hinds, which are for the jaded Chinese a delicious dish. Science, which is the vanguard of colonisation, has the largest share in the contributions of New Caledonia; these are the ample and beautiful herbariums of Mr Vieillard, honoured with a gold medal, the natural history collections of Messrs Paucher, Deplanche, Mévus, Garnier, whose meeting reveals the most precious resources, under the healthiest climate in the world.

A little more advanced, because the date of its occupation is ten years older, the island of Tahiti boasts - and it is right to do so - the cottons of the Suarez company, and the arrowroot of Mr. Bonnet, not to mention its pearl oysters, and its nacres, and its tripangs and coconut oils: so many appeals to the trade of Asia and the industry of Europe.

Placed for the most part in the areas that are warmed and illuminated by a blazing sun, the French colonies present at a glance a sparkling variety of colours that are reflected throughout the Exhibition. The visitor soon recognizes that he is in the land of hummingbirds and hummingbirds, of dazzling and fragrant flowers; and he is sure to discover everywhere fantasy, original to the point of weirdness, alongside seriously useful works. In this genre nothing surpasses the flowers of Messrs. Malidor and Desmoulins, composed not with dull petals of paper or muslin, but with the feathers of tropical birds, all diaphanous with topaz and gold, sapphire and ruby. One cannot imagine anything more vivid and elegantly pretty.