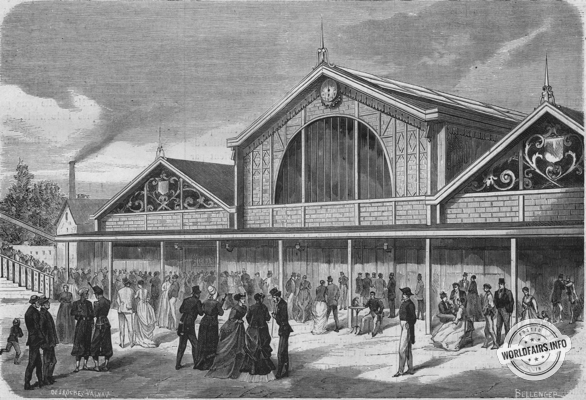 The Champ de Mars station is destined to disappear soon, like all the other monuments of the Exhibition, which is a pity; it is a very successful construction and we pay our compliments to the architect who built it.

The railway line which connects the Champ de Mars to the ring road is an eccentric line, that is, instead of going towards Paris, it goes away from it. It is three kilometres long up to Grenelle station, where it meets the ring road. So this eccentric route justified the bizarre proposition that the longest way to go from one point to another is a railway.

The operation began on April 1, the very day of the opening of the Exhibition. The number of passengers transported to and from the exhibition until 3 November was 1,474,000, or just under 7,000 per day. The delay in taking delivery of the work did not allow the Champ de Mars road to render all the services it should have rendered to the installation of the products, for the transport of parcels.

What did it cost to restore this ephemeral road? I do not estimate the expense at less than two million, of which about 500,000 was for the station. The construction alone cost 210,000 francs; to this price must be added the considerable embankments, the turntables, the gas pipes and the sidings.

What did the road produce? Less than 100,000 francs, if one considers that it shares the revenue with the ring road, according to the number of kilometres covered.

It has been said that the road was built so as not to last. This is a mistake: the same solidity was demanded as for a permanent way. What gave rise to this error is that the track occupies the site of the river bank, which the Prefect of the Seine has reserved for himself to build the quays of Grenelle.

But neither the quays nor the railway are necessary in these parts if the Champ de Mars is to be returned to its original purpose.

When this road was voted by the Corps Législatif, it was specified that its demolition might be required, after the temporary service for which it was intended. All the interested parties having an interest in this demolition, this clause of the law could not delay in being executed.

I have said that the travellers had not brought in more than 100,000 fr. to the Champ de Mars road, all route compensation made with the ring road. But from this sum it is necessary to deduct in expenditure, the expenses of personnel, supervisors and employees, gas and all the service of the material. Because this path produces in the middle of a crowd, one can calculate what it would produce with the Champ de Mars deserted.

By demolishing it, the Company will find this advantage of having its personnel available for a more useful service, of making use of the rails on its new network, and of getting in the proceeds of the sale of the demolitions of the station. The proceeds from the demolitions will not, of course, cover the entire cost of the station, amounting to between 400,000 and 500,000 francs, but only the 210,000 francs that the construction cost.

It is a great pity that this construction must disappear, because it is very successful, as we have said. Two large staircases arching over Avenue Suffren connect the station with the Exhibition Park. A large terrace opens in front of the façade, and serves as a waiting room. The refreshment room is at the other end of the station, with the newspaper office. To the right and left are the departure counters, one for Grenelle, left bank, the other for Auteuil, right bank. The dimensions of the interior are sufficient to accommodate the crowd.

The goods station is below, on the side of the platform: rails make it communicate on the same level with the Champ de Mars, as far as the machinery gallery, so that the parcels pass from the Palais onto the railway, without transhipment.

As you can see, we continue to collect the remains of things that will soon be seen no more, and which will live only in my memory.