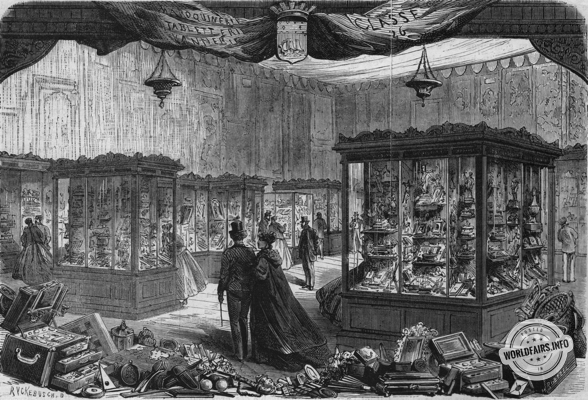 The old leatherworkers were tanners of the highest order; they had obtained letters patent registered in Parliament, and with them the privileges accorded to royal manufactures; their service to France, which they had freed from the heavy tribute she had long been forced to pay to foreigners, was thus recognised.

The special preparation or finishing of goat, goat, sheep and calf skins, the treatment of these skins with sumac or gallnut and their colouring with cochineal and kermes attributed to Morocco, are particularly due to the workers of Tétuan, a town in the kingdom of Fez.

The manufacture of morocco in Europe does not go back further than the first half of the last century, until then it was taken from the Levant and the Barbary coast.

It did not become very flourishing in France, despite the privileges that had been granted to it, until 1797, when Messrs Fauler and Rempli founded their large factory at Marly-le-Roi.

From that time onwards, the progress of this industry made immense strides, and today it has succeeded in reproducing in the most exact manner the various colours and shades required by its appropriation and use in furnishings, as hangings, tapestries and luxury ornaments.

But its industrial applications were not to stop there: Austria tried to use it in the small objects of tableware, and M. Schloss who brought to Paris samples of the first tests made in Vienna, opened, perhaps without his knowledge, to our industry, an inexhaustible source of gracious and ravishing creations. Soon an ardent struggle was established on this peaceful ground between the manufacturers and workers of Vienna, Paris and London: the craft took on the proportions of a vast manufacture in a short time, and the new industry almost immediately demanded the assistance of art to reach its highest point of perfection.

The masterpieces of all kinds which it has exhibited to the dazzled eyes of the visitors to the Champ de Mars might lead one to believe that it was after long and painful trial and error that it reached the realization of these marvels; and yet this industry was hardly born yesterday, and it was almost from the start that it arrived at the point where we see it.

How can we suppose, in fact, that with all the resources it will later be able to dispose of, the intelligent assistance of the most skilful artists, and the tireless imagination, the surprising ingenuity of its directors, who are true magicians, it can achieve more astonishing wonders than those which have accumulated, in their showcases, Messrs Midocq and Gaillard, Mr Auguste Klein and Messrs Rodeck frères?

These three exhibitors were awarded the gold medal; they would have been better shared, no doubt, if the jury had not been afraid to award a prize of honour to an industry which, in the opinion of some severe judges, has the disadvantage of being purely an industry of fantasy and luxury.

We confess, for our part, that we would not have made this subtle distinction and this modest reservation.

The kit by Messrs Midocq and Gaillard, with its rich and splendid fittings, seems to us, in its genre, one of the most accomplished and complete works of the entire Exhibition, and we would be hard pressed to find, among the elegant products in the Palais, objects that could rival the magnificent album by M. Auguste Klein for good taste and perfection. Never has bookbinding, even in the time of the greatest masters, executed anything more perfect than the spine, the boards, the backing, the gilding and the ornaments of this enormous volume. Never before has morocco been so brilliantly adorned.

Mr. Schloss and Mr. Neveu, out of the competition due to the association of Mr. Auguste Schloss to the jury, exhibited more tablettery than leather goods. Their two ivory torches, bought by H.I.H. Princess Mathilde, are remarkable pieces of art for their extreme simplicity and very good taste.

The beautiful silver set by M. Aucoc, who, as a member of the jury, is also out of the competition, is a fine piece of work; all the parts have been executed with meticulous care; this piece of furniture, intended for the Prince Imperial, would not be out of place in any palace.

M. Allain-Moulard was awarded the silver medal. In our opinion, this is still a rather meagre reward; for his showcase is a veritable jewel case, and all his products are objects of charming coquetry. What variety! What fantasy! One must have an imagination constantly at work to produce so many different objects of such perfect execution. There are purses, purses, cigar holders, bags, albums, blotters, which can only be the work of a magician; and next to them bags, pouches, cuddly toys, headdresses, bracelets and necklaces of a truly adorable elegance and grace.

The small leather goods industry has extended its field a little; it is no longer satisfied with using leather; it marries it with velvet and silk, and finds such ingenious combinations that one goes from surprise to surprise in the examination of its thousand products; if need be, and these cases are frequent, it enhances its work by embellishing it with pearls, by applying tortoiseshell and ivory, and by enriching it with brilliant trimmings of metal, often of silver and sometimes of gold.

The multiplicity of leather goods makes it difficult to evaluate the raw material, which, most often, only enters into the manufacturing process for a very small part; for this industry is obliged to constantly call upon cabinet makers, table makers, jewellers, cutlers, and all of the trimmer workers, without whom it would be impossible for it to make its kits, its travel bags, and the thousand objects of its current manufacture.

Mr. Leucbars, of London, to whom the jury awarded a silver medal, has brought together in his showcase products of a very English richness and luxury: the care and taste which presided over the establishment of his kits are to be commended without reserve; but what distinguishes them is a solidity which can defy all damage and all accidents. Such furniture can cross the seas with impunity, and I have no doubt that after having travelled around the world, it will return to London as fresh as before.

The leather goods of Paris, Vienna and London each have their own particular character: in Vienna, the main concern is to achieve brilliance, sparkle and luxury, to which the rest is sacrificed; in London, elegance is only understood in terms of richness, and solidity only in terms of solid construction; in Paris, an effort is made to combine all of these qualities, while avoiding exaggerating them and, consequently, falling into the trap of wanting to do too much.

The Exposition proved that, in our country, this industry has reached its highest point of perfection, and that Paris has nothing to fear from foreign rivalry.

If Austria had 3 gold medals, France had 4 and, moreover, 26 silver medals against the 5 which were awarded to its predecessor in an industry whose royalty no longer belongs to it without sharing.