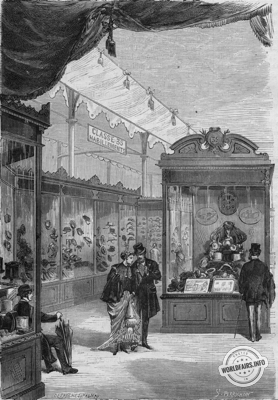 This is an essentially French industry, as we have already said when we walked through the Rue de Lorraine, where the products of the hat industry are exhibited; all countries copy very carefully the inventions and improvements of our manufacturers. They follow, for the shape of the hats, the fashion that Paris adopts, and they use the materials that our hat makers choose. We shall not therefore have to deal with foreign exhibitions, for what is found in the shop windows of other nations are only products of French imitation. Almost all the medals which the jury has been able to dispose of have been rightly applied to France; this has had only one drawback, that of rewarding houses of a quite secondary rank.

For the silk hat, the worker finds the elements ready-made. The first worker, called the galetier, makes the "galette" or carcass of the hat. This carcass is a cloth primed with shellac dissolved in alcohol; as soon as the worker has completed the shape, which varies according to the fashion of the day, a worker known as the assembler applies the silk fluff so as to cover the entire hat; a third worker, the tournurier, gives the hat its definitive shape, the brim its curvature, and the whole hat that stamp which distinguishes renowned manufacturers. All that remains is to edge and trim the inside and outside. Most of the time, this work is entrusted to women.

The silk hat, which only appeared in 1830, has hardly changed its shape. It has remained cylindrical, and in spite of the efforts made to react against a fashion which taste, indeed, cannot approve of, it is presumed that it will remain until modern costume itself has been profoundly transformed.

The felt hat goes back much further. Without wishing to give a history of an industry that is nevertheless national, we shall recall that the hat makers were organised into a society as early as 1578. Louis XIV, in order to protect our possessions in Canada, issued an ordinance obliging hat makers to use no other materials in their manufacture than beaver, wool and camel hair.
Hatting was regulated in this way until the abolition of the master's and jury commissions. Hare and rabbit were then used, and their hair was made more felt-like by saturating it with a preparation of mercury sulphate. Muskrat, gondola rat and otter were used and the same process was performed on them.

All these materials were very expensive from the start, and only the wealthier classes were able to afford them. The majority of the population wore caps and bonnets made from all kinds of materials.

At the beginning of this century, a product from Flanders was adopted. It was a fairly consolidated felt, which was brushed in boiling water. By this process the hair became fine, shiny and full, but as] it was of a certain length, it swelled in the wind, and the hat, which was called Flemish because of its origin, became ungainly and heavy. In addition, because of the gums and strong glues used in its preparation, it had the disadvantage of expanding or shrinking according to changes in temperature.

Around 1825 these primers were replaced by resinous materials and substances, such as shellac, sandarac, etc., all dissolved in alcohol. This primer was waterproof and protected from all atmospheric variations.

In 1842 some manufacturers in the Midi tried a soft felt hat, which at first was sold only in their locality; but soon this fashion became general, and the amount of demand became so great that an increase in labour followed. The strikes which took place at the time of the revolution of 1848, dealt a fatal blow to the hat industry. Many countries that had not previously made hats of this kind, began to do so in the face of Paris' abstention. Paris, because of the high cost of labour, could not compete with the provinces for the common qualities. Its production was restricted to the higher qualities. The workers, not having enough work to satisfy their needs, found nothing better than to ask for an increase in the cost price, without realising that the increase in the cost price would be detrimental to the work.

This state of affairs lasted until 1852. At that time, an American imported a machine for building felt hats into France. This machine was still only in the draft stage, but it had elements which, under the direction of a competent man, could give excellent results. Mr. Laville bought his process from the American inventor, and after many sacrifices of money and time, he was able to exhibit a complete building and treading machine in 1855. This was a revolution in the hat industry, and such an important innovation was only just rewarded with a first class medal.

In 1867, Mr. Haas exhibited the same machine, and, by an initiative for which he is to be thanked, he operated it in front of the public. Three rows of spectators constantly surrounded and contemplated this interesting implementation. We do not need to return to the description of this manufacture of felt hats. Mr. Victor Meunier, in our SO1"' issue, with an engraving to support it, detailed all the phases with great accuracy and wit.

The manufacture of hats in France now amounts to nearly 100 million, of which exports account for 18 to 20 million.

The cities that have contributed most to the success of the felt hat are Paris for the fine qualities, Aix for the soft hats, Bordeaux for various types of fantasy, and Toulouse for a type of hat called draped.

It is certain that the development of this industry is due to the use of the machines we have mentioned.
The cap is the headgear of the masses, and production is considerable. The main centres of manufacture are Paris, Toulon, Lyon, Limoges and Lille. A great variety of fabrics are used for this manufacture, from silk and fine cloths to the most ordinary fabrics. For some years now, a luxury cap has also been produced for travel and holidays. This is largely due to the sewing machines which allow very regular stitching and the embroidery of the caps. This industry generates a turnover of 20 million, a large part of which is exported. Greek caps or those supplied by Orleans and Paris to the Orient are attached to the caps.

As you can see, we are far from the old English beaver; since 1836, the English have been coming to buy our lint and, to this day, they have remained our tributaries.

The problem of selling cheaply and well has been solved, and - it is worth noting - wages have not been debased.

A collective gold medal was awarded to the French hat industry. As members of the jury, Messrs. Laville and Haas were out of the competition.

MM. Laville, Petit and Crespin own, in Charonne, one of the largest factories in France. Their mechanical equipment defies all competition, and their products rank first.

M. Haas found in the Knight's Cross of the Legion of Honour the just reward for his work. He put himself at the head of the small trades, and organised this democratic exhibition whose scope was so well understood and approved by the visitors to the Champ de Mars. To glorify and popularise work is a task worthy of an enlightened mind.

Among the silver medals, we shall mention Messrs Guenot and Lebargy, Coupin, of Aix, Christy, of London, Rousson, Maynès and Lasne of Paris, Maraval of Albi, Pinaud and Amour, and for straw hats, Kampmann of Strasbourg, Chaumonot of Paris, Belle, Agnellet, etc.
The superiority of the French exhibitors is highly attested; there, as elsewhere, our traditional taste is the law in Europe, and, as we have said, it is not
As we have said, to be convinced of this, we need only note the care taken to imitate all our models by foreign producers.