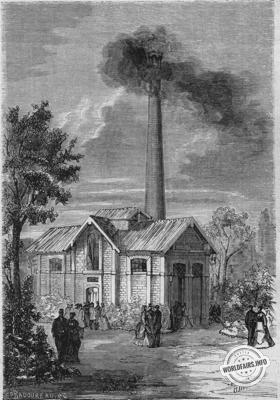 As the Exposition draws to a close, it is fitting to take the opportunity afforded by this article on the most magnificent of steam engines, to take a general look at the motive power service.

The motive power required for the Exhibition Palace alone amounts to a total of 687 horsepower, of which 582 horsepower are used to set the machines in motion and 105 to ventilate the Palace. The necessary steam is produced outside the palace in nine buildings, placed around the building at a distance of about 45 metres, in conjunction with nine chimneys 30 metres high. In addition, there are two sheds housing locomobiles for ventilation.

The first house contains Mr. Powell's boiler, which supplies steam to their two gemel machines that set the spinning and weaving looms in motion.

In the third pavilion we find the two boilers of Mr. Chevalier, setting in motion the machine of Mr. Duvergier, which transmits the power to the agricultural devices.

A Farcot locomobile driving two Perrigault double fans, used for the aeration of the Palace, is next to this third pavilion.

The fourth contains a boiler by M. Quillacq, connected to an engine of this manufacturer giving movement to machines used for the preparation of ores, etc., and a generator by Messrs Tenbrinck and Bonnet which powers the machine of the Graffenstaden factory, responsible for animating the machine tools.

The sixth pavilion is occupied by the two generators of the Prussian-Belgian company üemeuse and Houget, Houget and Teston, whose two machines serve North Germany and Belgium. In addition, these generators provide the steam for a machine that challenges three Gargan exhausters used for ventilation.

The seventh pavilion is occupied by the two boilers of Mr. Farcot, supplying steam to three of his machines, the first of which sets in motion two large double Perrigault ventilators and the machines of South Germany; the second, the machines of Austria, and the third those of Switzerland.

The penultimate pavilion contains Mr. Flaud's generator, in connection with this manufacturer's machine, which sets in motion the entire American sector.

We then find a very strong locomobile acting on two of Mr. Philipon's machines which complete the ventilation service, and we finally arrive at the English boilers housed in the ninth pavilion.

The double fan consists of two coupled fans, the first of which blows into the second which, acting on already compressed air, increases the compression and speed of the jet; as a result, the current leaves the double fan with a speed of more than one hundred metres per second.

It is known that according to the system of M. Piarron de Mondésir, Lehaitre and Julienne, who have just been awarded the gold medal for the ventilation of the Palace, the jets of the insufflation apparatus are directed into the sixteen radiating galleries under the streets of the Palace; these jets of compressed air carry a huge mass of air which penetrates into the underground galleries through sixteen air shafts of three metres in diameter dug in the Park twenty metres from the covered walkway The entrained air escapes from the underground galleries through the wooden grilles which, from distance to distance, connect the underground channels with the interior of the Palace; the stale air, expelled by the fresh air which is constantly flowing in, exits through the louvers placed at the top of the roof. Seven hundred thousand cubic metres of air are pumped into the immense building every hour and, thanks to this ventilation, there has always been a delightful temperature equally distant from heat and cold.

The Farcot locomobile is condensing and has a movable tubular beam for cleaning, like their large boilers, of which we shall speak; its power is fifteen horsepower.

All boiler builders seek above all to use all the heat that the fuel can give off, and therefore to burn it completely, which implies the suppression of black smoke. This result has now been completely achieved, the furnaces of large machines consume not more than one or two kilograms of coal per hour per horse, which is one-fifth of the former consumption, and the fireplaces of several manufacturers produce no smoke at all.

The English boilers have shone in the forefront in this respect, but most of our nations, led by Mr. Powel, have achieved results almost as conclusive. The 3 boilers of Messrs Farcot leave little to be desired in this respect. The Farcot generators consist of two superimposed cylinders joined by two large tubes; the lower cylinder, the larger one, contains the furnace followed by the bundle of tubes through which the flame passes and which the water surrounds on all sides.

As the water evaporates, it deposits incrusting matter which is a source of despair to mechanics. It is often necessary to clean the generators. For this purpose, Mr. Farcot fixes the furnace and the adjoining tubes to the two sides of the cylinder by means of two easily removable joints. When the boiler is clogged, the tubular furnace can be easily removed for cleaning. The upper cylinder serves as a water and steam tank. The boiler and the tank are enclosed in a large double-walled sheet metal jacket with an insulating substance between them. The hot gases, after passing through the tubes, circulate between the cylinders and the jacket before going to the chimney. The result of this arrangement is that twelve or fourteen hours after the furnace has been extinguished, the steam inside the boiler is still at two atmospheres, and the temperature is 120°.

The steam from these boilers goes to the three 17, 20 and 40 horsepower machines employed by Mr. Farcot to set in motion two double fans and the machines of the three countries that have entrusted them with their mechanical service. These machines are horizontal, with steam jacket, condensation and variable expansion by the action of the regulator. The system of expansion and that of the regulator are the invention of Mr. Farcot, like that of his famous boilers. The regulator is with rods and crossed arms, it acts instantaneously with enough energy to bring the machine back to its normal speed, even if one stops suddenly opposing any resistance to it.

In addition to these moving machines, Mr Farcot exhibited two horizontal machines, coupled on the same shaft, with a total force of 160 horsepower. This double engine is, perhaps, the most perfect of the Exhibition, and no one was surprised to see the jury confirm its vote of 1855 by giving the grand prize to the Farcot company, as it had awarded the grand medal of honour at the previous universal competition.