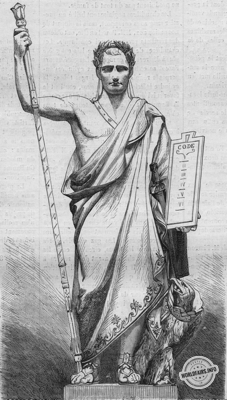 The statue of M. Guillaume (Institut Island), representing Napoleon the legislator, was much admired by the visitors to the Champ de Mars, in the square salon which precedes the rue de Paris. It is a work, if not quite masterly, at least of a very beautiful and pure character. The head is admirable, the attitude of the body is noble and harmonious. The whole is treated in the Greek style; and the artist seems to have remembered that the Greeks painted their statues indoors, as we know from the testimony of the Romans: for he has slightly tinted the edges of the imperial mantle. The statue of M. Guillaume is part of the gallery of Prince Napoleon.

The first consul had made himself the heir under benefit of inventory of the National Convention. This tough assembly has stirred up more bills in a few months than will be achieved in a century. In the purely civil laws, it had, so to speak, infused Roman law into the new law, according to the immortal principles of the Declaration of 89. But these scattered laws had been lost in the dust of events. The First Consul - and this was his first claim to fame - charged the Conseil d'Etat with codifying these scattered laws, after having purified them through discussion. There were in the Conseil d'Etat at that time men of great eminence, jurisconsults of the first order. I regret that I lack the space to speak about this memorable discussion, in which the First Consul took such an active and brilliant part: many ideas were put forward which would still seem new today.

Never has the human era been so fertile in remarkable men of all kinds as the era of the French Revolution: it even seems to have been exhausted since then by this prodigious gestation. In science and in war, it is incomparable. Under the influence of events and the transformations they brought about, the philosophical and historical literature which has produced so many masterpieces was born at that time: in legislation, it created imperishable monuments; and up to the Additional Act, that charter of the last days of the Empire, it laid the foundations of the new law in all things.

M. de Fonlanes, well inspired this time in his official harangue, said in offering the finished Civil Code to Napoleon that it was the act of our social constitution. Indeed, the Civil Code is the highest and most complete expression of human wisdom and equity. In the future, it may be possible to prune or add to the Civil Code, but the house will not break the framework.

So see! - Over the past sixty years or so, we have changed political constitutions many times; the social constitution has remained unshaken on its foundation. Above all, there is one title:
Obligations and Contracts, which will remain the inviolable law of human transactions as long as there are civilised peoples on earth.
There is a dream today of amending the Civil Code in the provisions relating to inheritance. Without wishing to prejudge the value or scope of this reform, I affirm that, if it succeeds, the entire Civil Code will be overturned, and the balance of rights and duties among men will be upset.

What can be changed and modified without risk are the Codes of Procedure, Criminal Procedure, etc., which have served as the means of modifying the Civil Code. Here, time does not seem to me to have exerted its remedial influence sufficiently on this secondary legislation, which is far too influenced by the pressure of a revolutionary period.

As for the Commercial Code, it is four years later than the Civil Code. Although its principles are excellent, and its elements have been sought in the Acta mercutorum of the Italian republics so well prepared by the great chancellor L'Hôpital, and in the ordinances of Colbert and his successors, the spirit and main provisions of the Code of Commerce are nevertheless influenced by the environment in which it was drafted. At that time, there was, strictly speaking, no commerce in France: there were only traders, suppliers and army stewards. It was to target their fraud and depredations in particular that the Commercial Code was applied. Hence the distrust it expresses and the energetic repression it enacts. It is no longer a law of our time to equate misfortune with fault in commercial transactions and to make failure a crime. Such a law must be left to ancient fate. To preventively decree a trader unworthy; under the pretext of protecting him, to say to him: "You will be dishonoured if you do not succeed," is to paralyse his self-confidence; it is to close before him the main road, and to force him to take side roads in order to escape the repressions which threaten him everywhere and unceasingly.

We have said what was immortal and perishable in the legislative work enacted by Napoleon I. In short, the glory
In short, the glory of having founded modern society legislatively will remain his finest title before posterity, and will excuse his political faults and his military excesses. What remains of his conquests? Nothing but mutual resentment between peoples.

However, the Napoleonic Code is in the process of making the rounds of the world, and of changing the face of human societies.