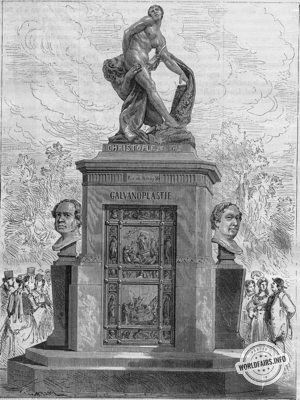 We have had occasion to describe the vast exhibition of M. Christofle et Cie, and to follow in its unceasing progress the galvanic goldsmith's trade. Today we only wish to draw attention to one speciality of this great industry, the products of round-bump electroplating.

Gilding and silvering metals by means of the electric battery was the aim of Messrs Elkington and Ruolz, whose first patent was taken out in Birmingham on 28 March 1840. M. Charles Christofle introduced their processes into France and exploited them with such success that he did not at first seek to innovate. His successors, M. Paul Christofle, his son, and Henri Bouilhet, his nephew, have applied electro-chemistry to the casting of statues, vases, groups, busts, which they obtain, with much less expense, as pure, as solid as by founding them by the means admitted to be the only infallible ones up to now.

Let us not hesitate to say it, the vase of the Education of Achilles, the group of the Navigation, are worthy of being compared to the beautiful pieces of goldsmithery that the sixteenth century has bequeathed to us.

The vase is in silver, with a flat body; it was modelled by Messrs Mathurin Moreau and A. Madroux, ornamentalists of the Christofle company. It rests on a finely chased foot, whose delicate arabesques cannot be seen without involuntarily thinking of Benvenuto Cellini. A garland of foliage snakes through the oval frame of the central medallion. The centaur Chiron gallops on the flat body, leading his young pupil, the light-footed Achilles. The composition is lively; the relief, skilfully calculated, is sometimes accentuated with vigour, sometimes lost in the background; the nature and the colour of the metal highlight the modelling of the three figures.

Two geniuses stand on the lateral consoles; one, holding spurs, personifies Emulation; the other carries the brake that directs the race and moderates a too dangerous impetuosity. Both have palms in their left hands, which accompany the slender, chiselled neck.
The vase of the Education of Achilles was offered by the Emperor, in 1867, to the Skaters' Circle.

It was in the name of the Imperial Government that the Marquis de Chasseloup-Laubat, Minister of the Navy and Colonies, presented the Navigation group to Waller Farquharn Larkins, Esquire, member of the Board of Trade. A commemorative plaque, placed on the base, recalls that this token of esteem and consideration was granted to him, in the month of January 1866, in memory of the services he rendered for the universal adoption of the International Code of Signals, with the assistance of M. de Sallan-drouze de la Mornaix, Lieutenant of the Imperial Navy.

Everyone understands how important it is for navigators to have an international means of communicating with the lands they are approaching and the ships they encounter at sea. For half a century, several attempts have been made to adopt a universal code of signals; unfortunately, out of a misunderstood self-esteem, each one wanted to recognise as good only the code adopted in his own country, and stubbornly rejected those of others. A trial had been tried in France several years ago:] Reynold Chauvaney's system, adopted by the French government, had been accepted by some maritime powers, but its use had not become widespread. France and England have just published a Code drawn up in London by a special commission of which Messrs Farquharn and S. de la Mornaix were secretaries. This Code, submitted to the examination of all the maritime nations, has received their approval, and the various governments have signed conventions with France and England, by which they undertake to
to make the use of this Code obligatory on board their ships of war and merchant ships. Joint commissions are in charge of translating this useful and important work into all languages, which will then be delivered at the lowest possible price to sailors. Up to now, only the English and French Codes have appeared.

It was not easy to sum up this technical history in an allegory, to write it in sculpture. M. Aimé Millet has represented navigation under the figure of an elegant, short-clothed woman, whose dress with a thousand folds is wet by the waves and contorted by the winds. She is seated on the prow of a ship; her left hand rests on a sphere; her right hand raises a star to guide sailors and warn them of danger. Next to her is a small genie wielding an oar. The composition is elegant; Aimé Millet's divinity belongs to the family. Aimé Millet's divinity belongs to the family of nymphs by Jean Goujon and Germain Pilon.

After having applied electroplating to goldsmith's and silversmith's pieces, M. Christofle wanted to use it for works of the largest dimensions. Contemporary public buildings are often decorated with colossal statues. The Imperial Academy of Music, for example, has already received busts of famous composers in the niches of its façade; and at both ends of the crown, allegorical groups are to be placed. These groups will come from the workshops of the Christofle company. The copper of which they will be formed will be deposited in immense moulds of gutta-percha, lined internally with lead; under the powerful action of the pile, it will acquire more cohesion and resistance than if it had been melted, and, freed from its envelope, will emerge in gigantic works of art.

This is how the busts of Halévy and Rossini were executed for the façade of the Opéra. Eager to prove the full power of his processes, M. Christofle was not afraid to measure himself against the most enormous statues we know. He reproduced, by electroplating, Michelangelo's Penseroso and Puget's Milon. The Crotone athlete, caught, as if in a vice, in the cleft of the tree he had wanted to break, disarmed in front of the lion that tears his flesh, offers us a spectacle as moving as the one in the Louvre Museum, where the original is.

Electroplating has just been born, and this is what it does now. It has reproduced, with the most meticulous accuracy, the beautiful sculpted door of the sacristy of Saint Mark's in Venice. It can, by becoming widespread, accomplish a real regeneration, open up new avenues for industry, and contribute, in a large proportion, to the embellishment of our public monuments.