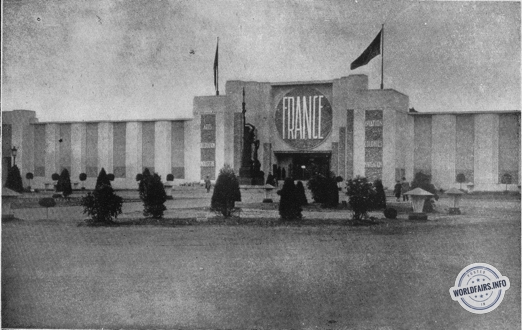 Location: The three wings of the French section, which actually form three separate but connected pavilions, were built around a small fort, now out of use, from which they completely hide the view. The main entrance is in the left-hand pavilion, just opposite the entrance to the Exhibition, on the Kiel side.

The French section covers an area of 17,000 square metres, of which 7,000 are occupied by the gardens surrounding the pavilions, which will be used for the participation of French horticulturists in international flower competitions. The built-up area, which, as mentioned above, includes three pavilions, therefore covers 10,000 m2.
From the main entrance of the Exhibition (Avenue Van Ryswyck), the French section is reached by the path that leads to the British section, on the right, and which continues along the pond. This path is the most direct route between the Van Ryswyck Avenue entrance and the Kiel entrance.

The general plan of the French section forms a hemicycle, which encircles the decommissioned fort and is therefore invisible. Two vast halls form the wings of a smaller central pavilion, which is that of the City of Paris.

Entering through the main entrance, from the first pavilion, which is the left wing of the complex, we come to a large square reception room. In the middle of this room, we notice a beautiful fountain, around which are arranged beautiful display cases containing the precious products of the French luxury industries: the decorative arts, Parisian haute couture, etc. In addition, there is a section devoted to tourism and shipping.

As far as shipping is concerned, we see the very important participation of private companies, which exhibit beautiful models of some of the largest transatlantic ships. The Ministries of the Navy and Public Works also play a very important role in this part of the section. There are models of all sizes, representing the sea bed in different places, maritime cartography, lighting and signalling services, health services, etc. France's major maritime works, ports, etc. are also represented in a comprehensive and highly documentary manner.

In front of the main entrance of this first pavilion and in the middle of a square, stands a 10 m. high bronze statue, a masterpiece by Bourdelle. It is a symbolic representation of France, which, due to its size and weight, could not be exhibited recently at the exhibition of the artist's works in Brussels.

The pavilion in the right wing houses the colonial section.

All the colonial possessions of the French Republic are represented here. This section is very interesting, especially from the point of view of agriculture. The building has a Moorish façade. In the immediate vicinity there are some North African "souks", where Algerian and other craftsmen ply their trade, as in the streets of the indigenous districts of their country.

Finally, the third pavilion, situated between the first two, and which is that of the City of Paris, exhibits models of the main domes of the French capital, namely that of the invalids, the Val-de-Grâce, the Pantheon, etc.

The old fort, around which the buildings of the section are grouped, has been very usefully employed as a wine cellar, where visitors can taste the best of French wine production. At the same time it serves as offices for the French Government Commissariat.