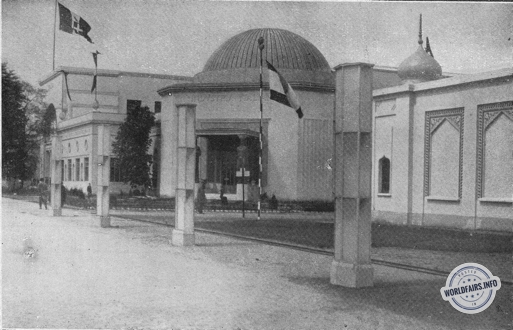 The Italian Pavilion covers an area of 7,500 square metres.

The artistic stucco decoration is the work of the firm Cav. MUSSO Carlo of Turin and was directed by? Professor CLEMENTE.

In the middle of the hall is the large Salon d'Honneur - which has two small booths next to it - and around which are grouped the halls for the Colonial Maritime, Automobile, Aviation and Industrial Exhibitions in general.

The main entrance to the Salon d'Honneur is on the Avenue de la Colonie and is located in the middle of the building's façade.

A wide Carrara marble staircase gives access to the peristyle.

On the architrave, supported by classical columns, are two statues by the sculptor MUSSO Emilio of Turin. The pavement is in coloured sandstone with marine motifs by CHINI of Florence (St. Lorenzo's furnaces) surrounded by gilded marble by Peverelli.

Three doors, a magnificent work of cabinet making, donated by the House of Flli. Ferraria of Turin, surmounted by gilded iron rostrums donated by the House of Bonetto, also of Turin, give access to the Hall of Honour and two side vestibules. The coloured marble paving stones of these halls were donated by the Soc. Nord Carrara (Milan). Next to this entrance there are niches with luminous ceramic fountains with azure and gold reflections, supplied by the Chini firm.

On either side of the central body there are lower constructions that connect it to the entrances of the Colonial and Industrial Exhibitions. The facades are decorated with ceramic medallions of the Chini of Florence, and everywhere different attributions (industry, navy, aviation, etc.) with lines dictated by H. E. the ex-Minister Paolo BOSELLI.

The entrance to the Colonial Exhibition, to the left of this main facade, is built of Chini ceramics (St. Lorenzo's furnaces) with two side panels measuring 6 metres x 2.50 metres decorated with stylised palms in high relief. The interior of the Dome is decorated by Professor Tito Chini of Florence, with palms and colonial motifs.

The facade of the Italian Pavilion, which faces the English Palace, has two higher forebodies with large windows, connected by a porch with columns and a staircase that allows access to the Pavilion. The two forebodies are surmounted by allegorical statues and by grandiose gilded iron banners with attributions of the navy (the sail) and the air force (the wings), the work of the Chini firm of Florence, and decorated with large ceramic panels by the same firm.

The main hall is 20 metres high and measures 500 square metres. It consists of a central nave with a plain ceiling supported by large arches. On the sides there are two lower aisles that take light from two small kiosks - while the wide central aisle is illuminated by 12 large stained glass windows by the Chini House of Florence, with motifs reminiscent of ancient nautical instruments.

The picturesque decoration of this room is due to Professor Cisterna of Rome with the collaboration of Professor Parachini of Turin.

The decorative subject matter is inspired by ancient Italian colonial and maritime glories. Two large lunettes at either end of the room recall the confines of the Roman Empire and the grandeur of Urbania.

Three large decorative panels representing geographical maps inspired by those well known in the Vatican, reproduce the colonial possessions of Venice, Genoa and Pisa, while a fourth panel represents the itineraries of the great Italian travellers. (Christopher Columbus, Vespuce, etc.).

Above the above-mentioned large windows there is an ornamentation representing ancient Italian ships (Roman triremes, Venetian galleys, Genoese, Amalfi, Pisan) and the caravels of Christopher Columbus.

On the transom of the large arches that support the ceiling, statues of the great Italian travellers, navigators and conquerors (Marco Polo, Christopher Columbus, Morosini, etc.), moulded by the Turin Museum, are displayed on consoles shaped like the prow of a ship.

The only ornaments in this hall of honour are the busts of His Majesty the King and His Excellency Mussolini, a large model of the Bucentaurus from the Venetian arsenal museum, and the flags of the glorious Italian maritime cities. The chandeliers are by Pretto of Turin.

The external façades are illuminated with projectors and indirect light bars by the engineer Felice Goffi of Turin.