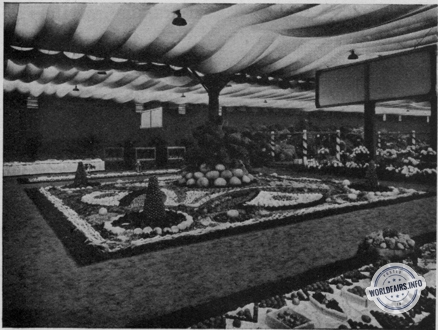 Between the second entrance of the Avenue Van Ryswyck and the Palais des Arts Décoratifs, there is a large triangle, on which the PALAIS DE L'AGRICULTURE ET DE L'HORTICULTURE was built for temporary exhibitions.

This temporary exhibition centre covers an area of 4,000 m2. It ends with a magnificent winter garden, where plants from southern countries are kept.

The agriculture and horticulture section had to include a series of temporary exhibitions as part of its extensive programme. Most agricultural and horticultural products are extremely perishable and can therefore only be displayed for a certain number of days. This is the case for forced and cut flowers, fruit, vegetables, dairy products, etc. Similarly, animal exhibits, such as cattle, chickens, pigeons, dogs, etc., may not be extended beyond a certain period.

Temporary exhibitions will be held mainly in the "Palais de l'Agriculture et de l'Horticulture", near the Electric Farm. Only the large livestock will be shown on specially prepared grounds at the Kiel ramparts.

The following is the schedule of these temporary events:

20, 21, 22 June: Provincial Ruminant Competition, organised under the auspices of the Antwerp Provincial Chamber of Agriculture.

4, 5 and 6 July: Provincial Horse Show, organised under the auspices of the Provincial Chamber of Agriculture of Antwerp.

We will not mention the numerous congresses and meetings, most of which will be held during the International Agriculture Week (5-15 August).