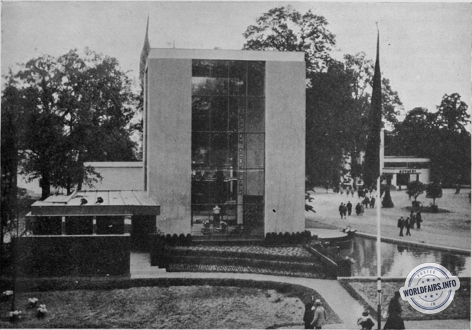 The De Beukelaer factory was founded in 1869 by a simple baker, who by dint of hard work and perseverance was able to create an important position for himself in the Belgian industrial world, while at the same time providing his country with a new industry, that of biscuit making.

The boldness of the company's founder was able to develop the main business, to which a chocolate factory, a wafer factory and a confectionery were successively added.

The idea of industrial integration was continued with the addition of the packaging departments, which produced all kinds of printed matter, cardboard and tin boxes, and wooden crates. A huge repair shop ensures the maintenance of all this equipment, to which a group of eight lean gas engines provides the motive power of twelve hundred HP.

The production capacity of the factories, calculated per eight-hour day, is: forty-five tons of biscuits and wafers; ten tons of chocolates; four tons of toffees. All these products are consumed mainly in the country itself. However, a large part of them is sent abroad.

The participation of the factories in the Antwerp Exhibition was based on a pious idea. It is worth recalling the role played by Edouard De Beukelaer in the organisation of the Antwerp Exhibition in 1894. He was one of the promoters and took on the role of Mayor of the famous Old Antwerp of that time, which the Old Belgium of 1930 has brought back to life with such intensity. It is to his memory that the splendid pavilion was dedicated, covering an area of five hundred and twenty square metres, with its flowery surroundings and the pond in which it was reflected.

This pavilion, made of light and clarity, a construction with hard and clean lines, with clear and cheerful colours, commemorated the breadth of vision, the clarity of spirit, the cheerfulness of heart and the ardour to live and undertake, of the man who was the founder of an industrial enterprise which employs sixteen hundred workers and employees.