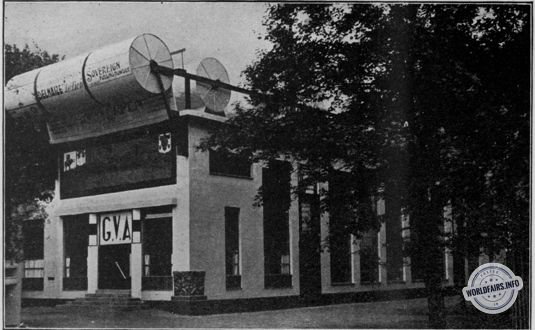 On 3 November 1891 the first issue of the 'Gazet van Antwerpen' appeared. The courageous founders had no idea that this small 4-page newspaper would become the largest Flemish Catholic newspaper in the country.

The birthplace was modest, but the confidence of the people, the friendship of the families and the zeal of the co-operators soon expanded the premises. Who would recognise in the large building in the Rue Nationale with its numerous staff, its large offices, its modern equipment, its spacious workshops built according to all the rules of hygiene, the small premises, the few workers and the old flatbed press of the heroic days?

When you see this monster press, the most modern in Belgium, printing 64 pages at a time, with an impressive speed, you understand the power of the Press.

The tiny four-page newspaper became a large-format newspaper, often with 28 pages; from the city of Antwerp it soon spread throughout the province, then to Flanders and Limburg and even to Wallonia. Every day, from Ostend to Maeseyck, from Turnhout to Charleroi, it visited more than 100,000 families.
Could the "Gazet van Antwerpen" refuse the Antwerp International Exhibition Committee to take care of the official programme in Flemish? No, it couldn't.
It built a pavilion, one of the largest built by a private company, with a surface area of more than 500 m2, including a complete rotogravure printing plant (the first one to be built in Antwerp) with its photographic rooms, retouching rooms, marble rooms, engraving rooms, printing, sanding and polishing workshops, electroplating, management and editorial offices, and typography.
Because the 'Gazet van Antwerpen' did not just print a small programme; it published 'Antwerpen 1930' 189 times. Each daily issue had sixteen large pages, a considerable amount of photos and descriptions: the whole of the Antwerp Exhibition, the daily events, the whole of life during those six months, a unique souvenir, a complete documentation of the Exhibition.
Through a large hall with modern furnishings and numerous photographs, visitors had access to a glass gallery from which they could see the composition and printing of the newspaper. At all hours of the day, from morning to evening, a large number of people looked on with attention and admiration; many even visited the pavilion in all its details. In this way the "Gazet van Antwerpen" achieved the aim of the exhibition: to be instructive for the mass of the population.

This illustrated magazine was so beautiful, so perfect, so lively, that at the repeated request of its readers, the "Gazet van Antwerpen" was obliged to continue its publication under the title "Zondagsvriend". Thousands of families subscribed to it immediately and we have no doubt that this young sister will follow in the footsteps of her elder sister, whose motto is "ever more beautiful, ever greater, ever more perfect".