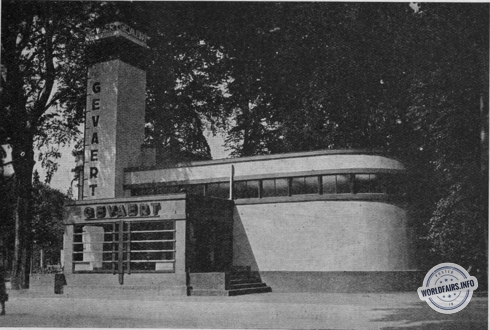 In one of the most prominent places in the central square of the exhibition stood the simple and distinguished pavilion of the Gevaert firm. Its sober, unpretentious modern forms were the work of the architect A. De Backer. De Backer, who had taken full advantage of the unique location of the site.
In fact, the beautiful green area surrounding the beautiful building made it stand out even more, so that this beautiful combination of technical know-how and natural attractions did not fail to arouse the curiosity of the passing crowd.
The visitors were not disappointed, because despite the essentially practical aims pursued here as everywhere else at the exhibition, the dominant note of the advertisement did not make the S. A. pavilion any less attractive. A. Photo-Products Gevaert pavilion a real art exhibition.

It was conclusively proven that any general discussion about the value of photography as an expression of art must remain idle, and that in particular the products manufactured by Gevaert Factories are wonderfully suited to the cult of modern art.

Enlargements, which, despite their respectable size, did not show any grain; a rich collection of photographs on the many varieties of each of the papers manufactured and which have fixed the world fame of the firm, negatives and slides on various plates, Roll-film and Film-Pack, were the admiration of connoisseurs.

The public was also able to see for itself that the Gevaert company is keen to keep up with the scientific and technical developments of our time: it also exhibited its X-ray films, films and plates for graphic processes.

Around 1890, Mr. L. Gevaert, like the other photographers of the time, emulsified his own paper. He improved the processes generally used. He improved them to such an extent that other photographers bought his paper. The demand grew. In 1894, the general partnership L. Gevaert & Co, with a capital of frs. 20,000, was founded. Five workers were employed there. Today, the S. A. Photo-Products Gevaert employs more than 3,000 workers and has a capital of 100,000,000 francs.

At the beginning, the Gevaert company had buildings covering an area of 500 m2. At present, the usable area of the factories is 67,000 m2. The actual surface area exceeds 7 hectares in Vieux-Dieu and 10 hectares in Heultje.

This evolution, which was achieved by the tireless energy of the company's founder, was summarised in three eloquent statistics, a fourth one represented the family tree of the products launched and gave a graphic overview of the continuous rise in turnover.

When our august Sovereigns visited the pavilion on 25 July 1930, they expressed their pleasure at having been able to learn so thoroughly about the rapid and magnificent development of the firm, which ranks among the world's leading industries in this field.