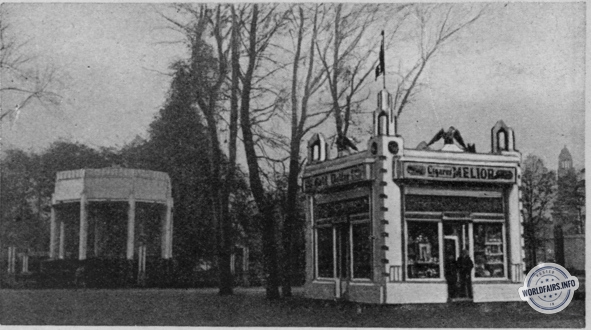 The Verellen Ltd firm is composed of the following companies:
1° Verellen Frères, founded in 1867, manufacturers of tobacco, cigars and cigarettes Old Antwerp - Factories in Antwerp, Gooreind, Wuest-wezel, Saint Léonard and Arendonck;
2° Ernest Tinchant, manufacturer of Melior cigars and cigarillos, La Fleur des Deux Mondes (Nulli Secundus), company founded in 1857 - Factories in Saint Nicolas and Antwerp;
3° The Van der Cruyssen Tobacco Company in Deynze, founded in 1872, manufacturing V. D. C. - Factories in Deynze.
The Verellen Ltd firm thus constitutes a complete agglomeration of the best equipped factories for the production of tobacco in all its forms. By grouping the various factories that are part of Verellen Ltd, the initiators of this enterprise have thus created a whole that can be described as perfect.

By the importance of its installations, the perfection of its tools and methods, the experience of its first-rate personnel, the Verellen Company deserves the place it occupies, not only on the Belgian market, but in many foreign countries.

All those who visited our International Exhibitions in Antwerp and Liège in 1930 were able to see the activity of this company and the care it takes with its products. In fact, its participation in these events was most striking: it had notably obtained the concession to sell within the Exhibition grounds and operated seven pavilions at the Antwerp Exhibition and two at the Liège Exhibition. It carried out its task - a very delicate one because it had to reach a very demanding clientele - to the full satisfaction of all.

A few words should be added about the results obtained by the Verellen firm, whose various companies are experiencing unparalleled growth, which has tripled its annual production in a few years.

The quantities of exported products - so highly reputed for their quality - are constantly increasing, thanks to the efforts of its agents and representatives throughout the world and to the organisation of the Export Department. There is no country, colony or protectorate in Europe, Asia, America, Africa or Oceania where the customs and tax system allows the sale of tobacco and where there is no evidence of Verellen Ltd.

The popularity of Verellen's products is largely due to the fact that the company has always made it a principle not only to maintain, but also to continually improve the quality of its manufacturers.

Finally, in the same year, the technical director of the firm's cigar factories - Mr. Joseph Verellen - was made a Knight of the Order of Leopold, and in this way the Government recognised and wanted to confirm the high qualities of this personality.

The cordial understanding mentioned above, which exists in this prosperous organisation and for which all the honour is due to its directors, who preside over the destiny of the company with such talent, is happily reflected in the irreproachable products coming out of its various factories and contributes in its turn to the good reputation of Belgian products.