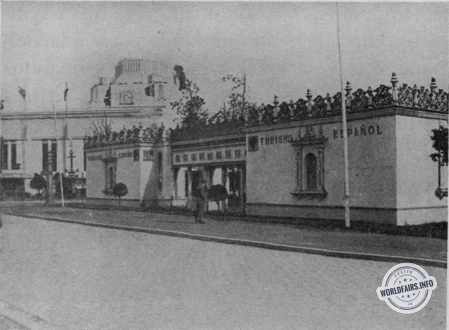 Making its great effort in Liege, Spain had to limit itself to a sympathetic participation in Antwerp. It built two small, charming pavilions to showcase its admirable tourist resources, its artistic pottery and its delicious wines. In addition, it contributed a highly appreciated exhibition of Flemish art, including several paintings by our most famous and representative masters.

A consignment from His Majesty the King of Spain was especially admired, including a collection of fifteen small panels by Master Juan de Flandes.

On the other hand, His Majesty Alfonso XIII regretted that he had not been able to send the magnificent Flemish tapestries from his collection, which had been lent to the Seville and Barcelona exhibitions.

The Spanish participation in the Antwerp exhibition was organised by the general curator, Mr Romualdo Alvargonzales.