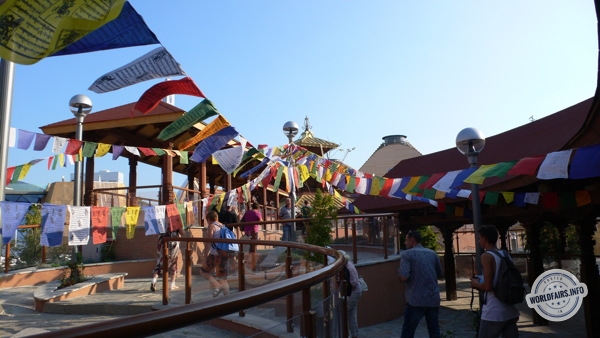 Following the terrible earthquake that hit Nepal in April, 11 of the 13 Nepalese workers who were working on it decided to return home, but thanks to EV-K2 and many Italian companies and associations volunteered to complete the pavilion and allow it to open in time.
But the pavilion was actually completed and presented to the public on 12 July.

The shape of the structure is reminiscent of the mandala, the circular diagram formed by the union of different geometric figures (the point, the triangle, the circle and the square), which recalls the circle of life.
To immerse visitors in the atmosphere of the oldest inhabited sites in the valleys of Kathmandu, several architectural elements of the Nepalese tradition have been reproduced: porticoes and temples with 42 hand-carved columns.

The theme of the Nepalese participation is "Food security and sustainability for development".
The country has a high level of biodiversity and, due to the geomorphological characteristics of its territory, it is an example for mountain agriculture thanks to its natural methods, its terracing and the richness of its organic products.