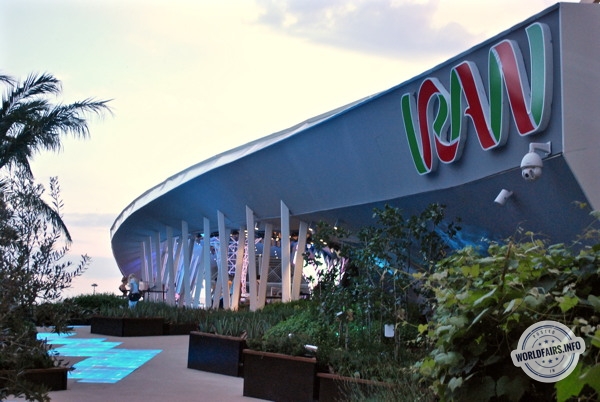 The concept
The Iranian people cultivate the belief that the essence of the world is based on wisdom, for this approach to its contribution to the theme of "Feeding the Planet" to be applicable it is up to wisdom to find motivated solutions to this global challenge.
The deeper belief of the Iranian people is that humanity is "invited to God's feast on Earth", the image of the attitude to be adopted for consumption is summarized in four axioms which are "equity", "charity", "contentment" and "gratitude".
Sofreh is the concept of the Iranian pavilion at Expo Milano 2015, through which God's blessings are presented to people around the world.


The design of the Pavilion

Tradition, sustainability and openness to diversity, all of which have been developed in Iran thanks to its strategic position as a bridge between East and West, serve as the three main themes of the Iranian pavilion concept designed for Expo Milano 2015.
The design of the pavilion was prepared by the team led by local architect Kamran Safamanesh, the first advanced phase of the architectural and interior design was carried out by Rah Shahr architectural consultants. The three themes are summarized by an object that carries them all: the Sofreh, a square of fabric that identifies the game table, one of the most important objects for the culinary culture of Iran (P1).
The architecture of the Pavilion is derived from this image in the form of an open, tent-like structure, where the interior parroting recalls the traditional embroidery of Sofreh.
Its weaving tells the story of the Iranian people's food and agriculture from the past to the present.
The surface gradually unfolds into a curved wall of triangular cells containing different objects on display.
At the top, a mosaic of mirrors reflects and reproduces what is happening below.
The pavilion is divided into two distinct levels: the upper floor is dedicated to the exhibition space, divided according to the seven climatic regions of Iran, while the lower floor is reserved for local products and Iranian cuisine, along with all the other services needed to welcome visitors.

Interior architecture
Interaction with its architectural concept and exterior form, so that while remaining true to the design concept, it follows an innovative form and thus brings integrity between the interior and exterior aspects of the building.
Through the interior decoration of the Iran pavilion, an effort has been made to leave an attractive, dreamy, deep and lingering impression on the visitors.
In order to achieve this goal, based on the studies conducted, first the approaches of the pavilion's interior design were established and they were followed by a definition of the spatial scenario based on a re-introduction of Iran and Iranian culture to the visitors.

The Iran pavilion scenario blends very well with the south-north elongation of the pavilion and the architectural design to be expressive of the country's territory extending from south to north with respect to climatic and environmental classifications.
Similarly, the sea-sea scenario starting from the Persian Gulf, ending with the Caspian Sea, the natural, environmental, cultural, lifestyle and tourism characteristics are presented to the public through their visit in the pavilion.
The interior of the pavilion is composed of the country's vegetation, which is evocative of Iran's desire for the restoration of nature with its implications of the PARDIS concept in the public's mind.
Above this surface are transparent showcases (in keeping with the geometry of the project) displaying a number of similarly themed Iranian artefacts.
Above the visitors, suspended mirrors reflect sophisticated and elegant images of what is happening below.
This is how the audience is brought into an interaction with their own person.
At the same time, Iranian culture and lifestyle are presented to the public through various means of multi-media.