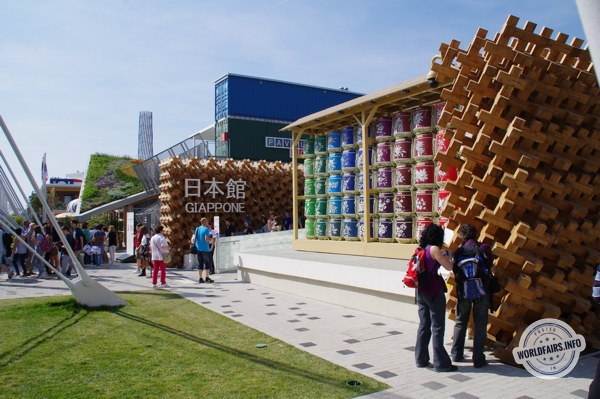 A bowl of diversity

Using the renewable resource of wood for the pavilion allows us to address the issues of maintaining and protecting forests.
Forests support the creation of nutrient-rich water, which returns to the land and seas, stimulating the creation of the diverse food that people eat.
The use of trees and people's lifestyles have been closely linked to satoyama (natural forests that coexist with a nearby populated area) in Japan since ancient times.
In these communities, Japan has promoted recycling-oriented societies.

The Japan Pavilion adopts a three-dimensional wooden grid as building materials that embody "sustainability", one of the keywords of the Milan Expo 2015.

The three-dimensional wooden grid will be the symbol of the origin of Japan's diversity - our four seasons, nature, ecosystem and food.
The Pavilion takes the form of a "diversity bowl".

A fusion of traditional Japanese culture and advanced technology


The pavilion consists of 5 scenes:

PROLOGUE
The world of Aioi, where people and nature coexist.
The front video screen tells the story of the Aioi (two tree trunks growing
from a root) of people and nature. Paintings and calligraphic works
express the country of Japan blessed by rain and the destruction/regeneration of the environment caused by humans.
Light and shadow, life and death ... the various phenomena that seem to be in conflict but cannot exist without each other are carved in the Japanese language. The walls on the left and right display a series of ukiyoe prints, a Japanese cultural asset that is familiar in Europe. These render the story "The Life of Rain," tracing the abundant water that nourishes the soil of Japan through the four seasons.
The entry will be like a picture book to represent the country of Japan where people and nature live in harmony. At the same time, it serves to bring visitors into the world of the Japan Pavilion.


Scene 1 - HARMONY
Japan's food production centres are respectful of nature and cultivate a wide variety of goodness.
Developed in the middle on sloping soils in a climate of heavy rainfall and humidity, Japan's rice fields conserve and cover the land surface with water, creating a soil that retains rich vegetation and biodiversity.
This not only provides healthy food for people, but also serves to control the nature that sometimes brings damage such as floods and
droughts. We will introduce this type of regime in the context of agriculture, forestry, fishing industry in Japan that coexists with nature, using the symbol of a stork that cannot make a habitat unless the rich ecosystem is preserved.
This area creates an experience for the five senses, immersing visitors in a rural Japanese landscape of the four seasons with a magical space that combines mirrors and video systems.

Stage 2 - DIVERSITY
The diversity and further development of Japan's agriculture, food, and food culture.
There is a great variety of agriculture in the world, with diverse and varied food. Similarly in Japan, agriculture, food and food culture has been cultivated in different regions according to the weather and climate, with further developments based on learning from the world.
In this area, visitors can realize the diversity of Japan and the rest of the world by getting a glimpse of more than 1,000 items of content related to agriculture, food and food culture.
The "Diversity Waterfall" retrieves information content from the dining table and provides an interactive experience. When a piece of content floating in the waterfall basin is touched, then the related information is displayed.

Scene 2 THE HERITAGE
Traditional wisdom and techniques that point to the future. Japanese cuisine is the food of the future.
One soup, three courses; fermentation and sun-drying; broth and umami; seasoning in the mouth; food culture varied by region and season. The rich wisdom and techniques deeply embedded in Japanese cuisine since ancient times can become universal values and serve as food for the future, contributing to healthy eating for people everywhere.
A showcase explains the wisdom and techniques applied to traditional Japanese food. The Japanese diet with its excellent nutritional balance, illustrated by the "one soup, three courses" menu, is also presented with graphics.

Stage 3 INNOVATION
Japan's creative solutions that uniquely address global issues
We will introduce Japan's approach of mutual recognition and respect for the world's variety in food production and diets. On this, we will share the problems on a global scale, such as agriculture/food standardization, unequal food supply distribution, and nutritional imbalance. As measures to solve them, we will propose the creation of cooperative associations based on agriculture, industry and fisheries, forestry industry and local communities to improve lifestyles; the traditional Japanese diet with excellent nutritional balance; and sustainable agricultural production initiatives that coexist with nature. We will also introduce international contributions of food and food production assistance that cross borders and advanced technology such as science and engineering that cross disciplinary boundaries.
The various problems faced by the world today are visualised in this futuristic laboratory space. The development of Japan's advanced technology to solve problems and contribute to global initiatives is introduced with visions of the future.

Stage 4 COOL JAPAN DESIGN GALLERY & WINDOWS OF JAPAN
The captivating Cool Japan produced by tradition and innovation.
Ingredients of the four seasons and tableware in the kitchen play important roles in Japanese food culture. The shapes and designs of Japanese serving dishes, as well as the traditional techniques for creating them, have been passed down through generations and are used every day in traditional crafts. In this area, we present Japanese serving dishes that artists have created using traditional craft techniques. We will also introduce "Cool Japan" with fashion and entertainment such as manga and animation to convey the charms of Japan's tradition, culture, and lifestyle to the world.

Scene 5 THEATER
Feelings and connections between people that start from the dining table. Japanese food is a global food that connects to the world.
The words "itadakimasu" and "gochisosama" express gratitude to all the people involved in the food as well as to the benefits of nature. Sharing these words deepens family ties, cultivates friendships, and widens the circle of communication. With performances that create a sense of unity by actively engaging the audience, visitors can discover how global Japanese food can be, connecting people around the world with a smile.
The live show is set in a restaurant of the future. It brings a sense of unity through interaction via media tables surrounded by the audience, human performances, and spatial video presentations on a large screen. It is a dynamic entertainment theatre that actively engages the audience so that people from all over the world can share feelings, joy and smiles.