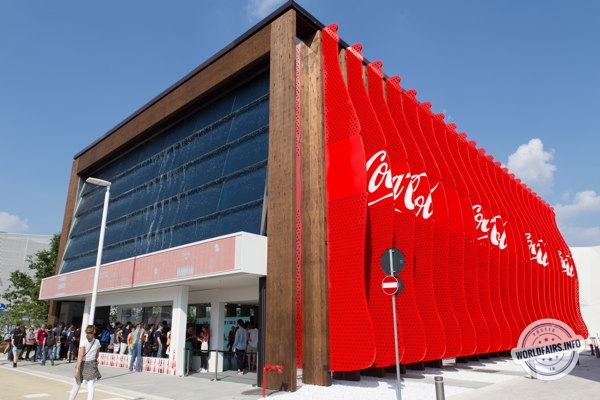 "Expo Milano 2015 revisits the formula of previous editions, with new orientations. The "industrial fair" of the 19th and 20th centuries has been replaced by an exhibition that places the visitor at the heart of the action through five thematic routes. The visitor is made aware of the need for a responsible lifestyle from the point of view of ecological food production. A major challenge for the 21st century.

Coca-Cola is also exhibiting the PlantBottle, the world's first PET plastic bottle made entirely from sugar cane and waste from the sugar industry. Using a new patented technology, this container can be recycled like PET for a reduced environmental impact. The aim is, of course, to reduce greenhouse gas emissions and avoid further depletion of our fossil resources. Originally launched in 2009, the first version of the project contained only 30% plant-based materials, but the brand has finally managed to finalise it.

In the pavilion you will also find works of art:
"Art in the Bottle", Coca-Cola Atlanta Archives

Pop Art's most influential figure managed to turn the simplest everyday gesture into an icon, turning banality into myth. Andy Warhol created this sequence in 1967 for the cover of the American rock band's albums. This work, too, is the result of his reinterpretation of art in the language of consumer society, leaving behind intellectuality to focus on the anonymity of objects.


An original "Expo" needs an innovative embassy! As a historical partner, Coca-Cola had to design a building that was up to the task. A mission accomplished with brio. The Coca-Cola Pavilion was designed as an ephemeral ode to sustainable development... The building, a 12-metre high parallelepiped with a total surface area of 1,000 square metres, is made entirely from sustainable materials: wood, glass and water will create an emblematic space. The exterior side walls reproduce the famous Coca-Cola logo and the silhouette of Contour, the historic glass bottle of Coca Cola, which in 2015 celebrates its 100th anniversary.