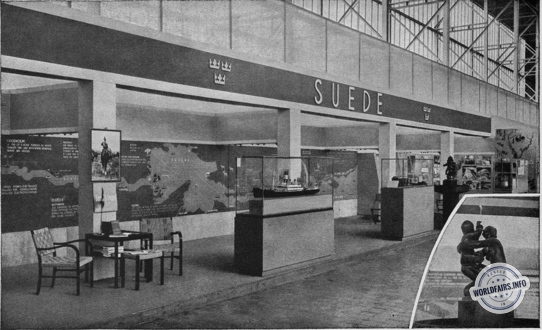 Sweden's official participation took place in the International Palace No. 22 on the right bank of the Meuse. It covered an area of 150 square metres.

It is well known how closely the economic and social life of this country is linked to water. Water plays a key role in all areas: production, transport, domestic economy. Perhaps this particular situation could have justified a more important, if not more extensive, participation by a large country? But Swedish industrialists have shown little interest in exhibitions in recent years. And it was the state alone that had to bear the burden of participation. As we shall see later, it succeeded in giving a complete picture of the relationship of water to the country's economic activity.

The participation was organised by a committee chaired by Mr. W. Borgquist, Director General of the Royal Waterworks Authority. The committee for the material execution was led by Mr. Torsten Althin, Director of the Polytechnic Museum in Stockholm, General Commissioner of the Section. The artistic direction of the design was provided by Mr. Jerk Werkmâster.

The general theme was naturally the presentation of Sweden as a country with many water powers, and the illustration of the importance of water for industry and as a means of communication.

A large decorative panel formed the background of the stand. It depicted the industries, agricultural work, and life in general along the Klarâlven, the characteristic river that had been taken as a type.

From the earliest times, there have been many important industries on and around this river. Hundred-year-old ruins, water mills, iron foundries and forges were reminders of the old settlements and the importance of water as a driving force and means of communication.

Today, industrial enterprises and the state railways (which are largely electrified) receive the energy they need from the many modern waterworks. In 1938, the country's electrical energy production reached 8,150 million KWH, i.e. 1,300 KWH per inhabitant. 90% of this production was from white coal, and the availability of electrical energy from hydraulic power amounts to 6.5 million KW, but only about 25% of the waterfalls are currently developed and used.

The frieze also showed, among other things, the world's largest Kaplan turbines (8.50 m in diameter), the country's largest hydroelectric plant (installed capacity: 150,000 KW), as well as the river system and lakes, including Lake Vânern, Sweden's largest and Europe's third largest lake, which is one of the world's largest water reservoirs.

It was also pointed out that agriculture is increasingly using electrical energy: currently 65% of agricultural enterprises are electrified.

The stand also featured a working demonstration model of the Kaplan turbine.

The special importance of water for paper and pulp mills was illustrated by statistics on the Skoghall pulp mill, which consumes 300,000 cubic metres of purified water per day, equivalent to the water consumption of a city of 1 million inhabitants.

The importance of the metallurgical industry, which has always depended heavily on water power, was also mentioned. The Swedish iron mines produce 15 million tons of refined ore annually thanks to the country's water power. A series of interesting photographs related to the metal industry, which tends more and more to produce high quality articles.

On the other hand, it is known that the exploitation of pine and fir forests, which cover 55% of the country's surface, constitutes a considerable resource for the country. Thanks to the steepness of the ground and the length of the rivers, the transport of timber by floating has been rationally organised. The total length of the country's floating routes exceeds 33,000 kilometres, and 150 million tree trunks are transported each year in this way. Photographs and a schematic representation of the floating technique were on display.

A map showed that sulphate and bisulphite factories and wood polishing plants are mainly located along the coast and in the north, while sawmills and processing plants are evenly distributed throughout the country. Various samples of finished products (plywood, stainless steel, etc.) were shown.

In addition, a model of an electric locomotive, a model of a rail transformer and a model of a steam steamer on the regular service between Antwerp and Sweden were shown.

Finally, as an example of what Swedish artists find inspiring in the field of water, a characteristic statue by the renowned sculptor Anders Jônsson was exhibited.

It is interesting to note that on the occasion of the Exhibition, Mr. W. Borgquist, the Chairman of the Section, published a book dealing with water technology in the Swedish economy in a comprehensive and very scientific manner.

In short, the participation was a very fine official representation which particularly highlighted the technical perfection to which the country has arrived among those who depend on water and who have succeeded in using the means available to them in the form of water power, waterways and lakes.
It did not include many private exhibitors. The Royal Waterworks Authority (Kungl. Vattenfallsstyrelsen) was entered in classes 4, 12 and 24 and won the Grand Prix in each. The Karlstads Mekaniska Verkstad Company in Karlstad was awarded the Grand Prix in class 11 for the beautiful demonstration model of the Kaplan turbine. Finally, a Swedish exhibitor who appeared individually in the International Section, Aktiebolaget Kanthal in Hallstahammar, was awarded the Gold Medal in class 1611 (metal products).