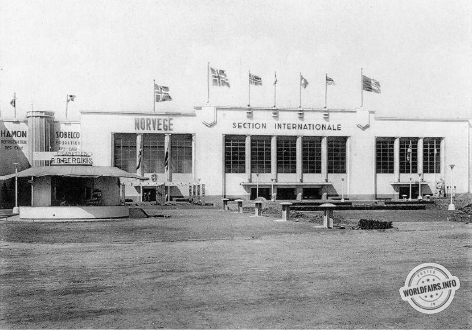 To show how closely the destiny of the Norwegian people is linked to the things of the sea and to the prodigious power of its countless waterfalls: this was the primary aim of the country's participation in the 1939 International Exhibition in Liege. The Section occupied a stand of 400 square metres in the Palais International No. 23, located on the right bank of the Meuse, near the main entrance to Bressoux.

In the centre of the stand, a large relief map measuring 20 metres by 8 metres was displayed below. It showed us the country bathed in the south, west and north by the sea, which penetrates deep into the interior and forms the famous fjords, with their sinuous contours and rare beauty. The many harbours bear witness to the development of maritime life. Ships and fishing boats line the coast. The Norwegian merchant fleet is one of the largest in the world, compared to the population density.

As one moves away from the sea, one gradually reaches the mountainous regions. The gentle slopes of the hills, excellent for skiers, slowly rise to peaks of 1,000 to 1,500 metres. An extensive network of railway lines covers the plains and the slopes of the mountains. Here and there you can see the cities and their characteristic buildings, such as the Oslo City Hall. The map also showed the important role played by the mining and timber industries, fisheries and agriculture in the national economy.

But what was most striking was the enormous power of white coal, which supplies electricity to the major industries. This relief map thus gave an excellent overall impression of the country, its climatic and geological conditions, its industrial production and its maritime and commercial life.
Around the map, which in a way summarised the common interests of the various exhibitors, were grouped the individual stands.

The maritime route from Belgium to Norway was presented. A shipping company exhibited a model of one of its ships that operated a weekly passenger and freight service between Antwerp and Oslo.

Various factories showed views of their facilities, and some displayed samples of their products. These included zinc, ferro-manganese, carbide, etc.

The Union des Usines d'Electricité had a stand dedicated to the electrical industry. With the help of maps, plans, tables, diagrams and graphs, the importance of Norway's water power was highlighted. They far exceed those of any other country. They are estimated at 13 million KW. of which barely 2 million are currently installed. As technical progress makes the use of white coal more valuable, these quantities will only increase.

A map showed the waterfalls of at least 2,000 KW. and the energy recovered and used. The exploited waterfalls were marked differently depending on whether they belonged to the state, to municipalities or to private individuals. The non-operated waterfalls and those of lesser importance were also indicated. Many of them are located in the vicinity of ice-free ports.
Another map showed the steady progress of white coal mining from 1908 to the present day. It also showed how the electric power of water had been distributed throughout the country at the cost of enormous difficulties. Other maps and statistics happily completed this interesting set.

The Norwegian participation thus showed in a striking way how the great maritime and industrial enterprises were able to create advantageous conditions of existence for hundreds of thousands of people living on a land which, by its nature, offered only mediocre resources.

Norway is therefore one of the most prosperous countries in Europe. Despite its northern location, it has a relatively mild climate. The average temperature is very high compared to other countries at the same latitude. Thirty years ago, Norway was still little visited. Today, it has become a favourite destination for thousands of tourists.

The only entries to the Jury were in class 13, the Collective of Exhibiting Industrialists, and in class 16II, the Electric Furnace Products Company Ltd, Sauda (ferro-manganese). Their merits were officially recognised with two brilliant Grand Prix awards.