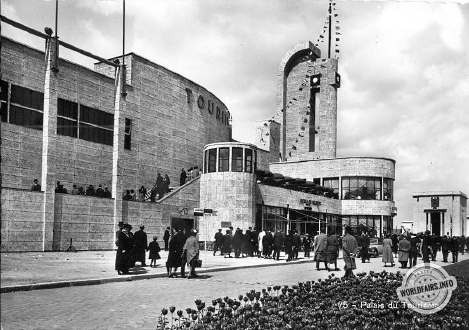 This palace had a privileged location. Its facades were located at the corner of the esplanade of honour and the road along the Meuse. It was an original combination of volumes and architectural motifs, for which there was perhaps too much variation.

The most striking part was the rotunda of the restaurant, whose graceful curve extended towards the river. From here, the consumer enjoyed a splendid view of the Exhibition. It is to be regretted that the "signal" - an ingenious idea - made the whole thing a little too heavy.

The layout allowed for a pleasant and easy visit to the palace. Upon entering, the visitor was led into the main hall. After having visited the various stands on the ground floor, he was led by gentle ramps to the first floor, where interesting sections were brought together.

On the first floor, a very original gallery showed us, from the deck of an ocean liner, a panorama of the Belgian coast executed with talent, in a very modern decorative style, by three young artists: Claude Lyr, Jean Panzy and Paul Frognez. We must also mention the names of Baest, Delbaere and Ghobert.


Entering the Exhibition through the main entrance of Coronmeuse, the visitor would discover on his right a palace, at once charming and imposing, called the Palais du Tourisme.
As soon as he walked through the door, he felt like he was in a grand palace and it seemed as if a stylish butler and eager hunters were rushing towards him. A real travel atmosphere! At the counters, friendly employees were ready to give him any information: a travel agency office, a post office, a telegraph service and telephone booths were at his disposal. There was also a Belgian Railways agency, representatives of the Touring Club and the Automobile Club of Belgium, a bureau de change, a guide service and all the documentation he could consult at his ease.

It was a real hive of activity, as information was provided on the Exhibition, the city, the surroundings, foreign travel, shows, festivals, sports events, travel conditions, accommodation and maintenance of groups, etc.

The visitor was then drawn further into a large room in which, by means of frescoes, dioramas and illuminated maps, our best artists had reproduced the mystery of our caves and forests, the enchantment of our landscapes bathed by capricious rivers. In addition, more than three hundred photographic reproductions recalled the picturesque sites of Liege and its surroundings. This impressive collection had been produced thanks to the collaboration of the City of Liège (Office communal de Tourisme), the Province (Fédération provinciale de Tourisme) and the Union des Syndicats d'Initiative de la Province de Liège. The visitor was amazed and left with the impression that never before had such an effort been made to highlight the natural beauty of the country. Such eloquent and artistically presented propaganda deserves to be continued on a permanent basis.

At the back of the hall, after passing a very beautiful Sabena participation, the visitor was led by an inclined plane to a gallery which was none other than the promenade deck of an ocean liner, with a vast diorama of the Belgian coastline bathed by the waves of the North Sea on the horizon. This was the stand of the Ministry of Communications.

This led to the large hall on the first floor where the visitor could get a complete picture of what has been done so far for luxury tourism, so to speak, and for popular tourism. In the centre, on a large map of Belgium, one could see tiny buildings: these were the youth hostels, the leisure hostels, the hostels of friends of nature. These institutions, which were new to us, had a considerable social significance - to give young people the opportunity to live a healthy life, in nature and at conditions accessible to all, regardless of their financial situation. This concern to consider the social aspect of tourism deserves attention, and the new legal provisions ensuring paid holidays for all workers will not fail to increase the importance of this problem.

The perimeter of the hall was lined with numerous stands that vied with each other in interest and good taste. The National Belgian Railway Company had taken as its theme: a century of progress at the service of tourism and highlighted the efforts it is constantly making to improve the comfort, speed and safety of travel. The Chemins de fer vicinaux showed us their role in Belgian tourism. We know how much they have contributed to the discovery of regions whose beauty was unknown on the coast, in the Ardennes, in the Kempen and in Brabant. Let's also mention the participation of the provinces of Brabant, Hainaut and Namur, of the municipal administrations or tourist offices of Comblain, Foy-Notre-Dame, Tongeren and Tournai, and others...

And, as he descended, the visitor found on his left, a beautiful cinema room where tourist propaganda films were shown, allowing him to make an even more intimate contact with the natural beauties and artistic treasures of the country.