Palace No. 18 (known as the Miscellaneous Industries Palace) - Expo Liege 1939 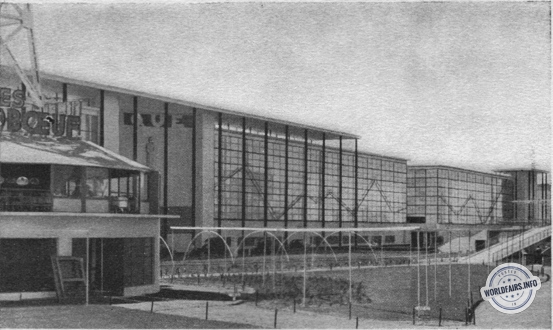 These four palaces, 17-18-19-20, known as the "Belgian" palaces, were built along the water garden. They formed one of the most successful ensembles of the Exhibition. Although treated with simplicity, the architectural composition revealed a great deal of research into the balance of the masses and the good distribution of solids and voids. The materials used to clad the façades were judiciously chosen. There was no lack of original ideas, such as the large canopies overhanging the roofs, supported by elegant Grey beams whose nakedness underlined the boldness of the composition. We should also mention the graphic of the Belgian trade, running through the large windows, which, by its very line, was enough to bring them to life. The glazings, made of "Thermolux" glass, had their main framework clearly marked, which broke the monotony of this immense grid. The entrances, in the form of forebodies or rotundas, framed by high pilasters, were enhanced by bas-reliefs, the work of sculptors Van Neste and Wybaux. It seemed to us that a decorative fresco for the rotunda would have been more appropriate than the three figures somewhat lost on this large surface.

Class 15, originally intended to present the visitor with equipment and processes highlighting the special technical role of water in industry, saw its field expand considerably. From the extractive industries to the food industries, via the chemical and electrochemical industries, it extended to various industries such as tobacco, leather, as well as pamphlets and bookbinding. In addition, there was a natural tendency for exhibitors to focus more on their manufacturers than on the special equipment used in their industry for water technology.

It is not surprising, therefore, that this class did not have a definite focus or unity of presentation. However, for the visitor, the nature of the exhibits was a revelation of the role played by water in areas where its intervention is not always apparent.

The palace reserved for this class was No. 18, to which must be added No. 17, which was dedicated solely to food. Numerous participations were still installed elsewhere, notably in the Palais des Industries Lourdes.
We will summarise the efforts of these Belgian exhibitors by industry category or, better still, by the seven sections of the class.

In the EXTRACTIVE INDUSTRIES, and especially the coalmines, there are many points of contact with water. The Belgian participations in this field, as numerous as they were interesting, were grouped together in Palais n° 18.

The Federation of Belgian Coal Associations, in collaboration with the Mining Administration, presented documents and models relating to mine drainage, protection against mine water and the use of water in coal mines. In several individual or collective stands, a number of industrialists exhibited very well-developed equipment including: equipment for washing and settling coals and ores, devices for treatment by flotation, processes for protection against water, for digging shafts by freezing, cementing, etc., various pumps (dewatering, flotation, backfilling, washing, circulation, hydraulic pumps, etc.), and even shower baths, cupboards and washbasins essential for the hygiene of the operating personnel.

This section also covered the rational use of fuels, particularly for vaporising water in the generators. Numerous devices were presented under this heading, such as briquette preparation devices, mechanical grills, dust collectors, etc.

In another field, the Groupement des Carrières et Fours à Chaux de la Vallée de la Meuse was represented.
The problem of the development and prospects of the electrochemical and electrothermal industries deserves to be addressed. Countries like ours, rich in fuel but poor in white coal, had hardly developed their industries of this kind until 1914. It took the economic circumstances of the post-war period to encourage a few enterprising industrialists to give a boost to this department of the chemical and metallurgical industries by using electrical energy from coal. Numerous manufacturing processes were started on a semi-industrial scale, in particular to use the power from the power stations during off-peak hours. In this respect, one can think that the extreme flexibility of electrical energy opens up a new future in our country for very specialised electrochemical industries, of medium or small scale, even down to the small-scale unit. As already mentioned above (see No. 1, class 13), the multiplication of industries of this kind would open up interesting outlets for electricity.

At the Exhibition, the most remarkable participation in this field was that of the Association des Centrales électriques industrielles de Belgique and the Comité belge de l'Electrothermie et de l'Electrochimie, where the problem was considered as a whole. We should also note the stand of the Société belge d'Electrochimie, producer of calcium cyanamide and calcium carbide by electric furnaces, and a few less important participations relating mainly to the equipment of the companies under this heading.

The third and fourth sections of the class were devoted to the CHEMICAL AND SYNTHETIC INDUSTRIES respectively.
The residues of the old alumina mines, one of the most curious characteristics of the Liège Meuse valley, are sufficient proof of the age of the Belgian chemical industries. Our country has also played a leading role in the development of certain products. To prove this, it is sufficient to mention the names of Solvay and Fourcault, among many others. Today, our chemical industry is worthy of its brilliant past and contributes an average of 15% to the total volume of our exports.

On the other hand, the synthesis industries, which generally include those which produce chemical products by combining simple elements, have also developed considerably in our country, thanks to the importance of our coal production.

In all these processes, water is used as a raw material, as a solvent or carrier, and even as a source of heat. As a means of refrigeration, in liquid or ice form, water acts in washing towers, condensers, various radiators, in devices for cold rooms or in household appliances. On the other hand, a series of devices such as de-sludgers, sifters and grinders of all kinds, which, due to their degree of perfection, have allowed enormous progress, for example in the cement and ceramic industries, could be seen in various stands. There were also special pumps for the circulation of corrosive liquids such as acids or acidic and saline waters commonly used in the chemical industries.

There were also desiccators (dehydrating presses) for removing water from certain materials such as coal, clay, various earths, etc., as well as various filters for separating solids and liquids.
The chemical industries had taken care to include in their stands the numerous organic or mineral products they manufacture. The visitor could thus see, by examining the various acids, fertilizers, pharmaceutical products, gelatins, glues, soaps, insecticides, etc., the degree of perfection to which the work in the factory made it possible to present the prepared materials.

Among the most successful participations was that of the Collectivité des Industries du Cuir, where, in a series of attractive and instructive stands, the various manufacturing phases of the main leather industries were presented, with special emphasis on the important role played by water in the preparation of hides. For the documentation of the visitor, carefully selected specimens of the main leather articles were displayed.

Let us also note, still in Hall No. 18, a beautiful stand of the Belgian Nitrogen Federation next to that of the Belgian Nitrogen and Chemical Products Society of Marly. Let us also mention the beautiful pavilion built in the gardens by the Belgian Cement Association, a grouping of all Belgian producers of the different categories of cements: Portland, metallurgical, oversulphated metallurgical and slag cements, and that of a firm of detergents and household cleaning products (Société Persil). Finally, there was a small section of inks, glues and various office products in Hall 21.

The GAS INDUSTRY was the subject of the fifth section of the class. Water can play an important role in the production of water gas, in the recovery of by-products and as a coolant in the extinction of cokes. In gas distribution, it can play a harmful role by wetting the pipes.

We are forced to note that none of the aspects of this problem had been the subject of a study at the Exhibition. Although, under the aegis of the Association des Gaziers Belges, the companies concerned occupied an important stand in Hall No. 18, this participation was entirely devoted to the presentation of appliances, especially domestic ones, that operate on gas. This stand lacked a scientific or didactic appearance and was confined to pure commercial advertising.

A similar remark can be made with regard to the FOOD INDUSTRY in the sixth subdivision of the class. In spite of the extent of their participation, which filled the whole of Palace No. 17, there was no attempt at technical demonstration. It should be added that the participation of beverages (especially wines and liqueurs) was dominant and that this was a subject not directly related to the Programme. In the foodstuffs sector, the programme could only concern the fermentation industries. However, these were hardly to be found there.

Fortunately, the Food Palace was well equipped. A beautiful decorative frieze, in the glory of wine, formed the pediment of the collective stand of the wine and liquor exhibitors. It pleasantly dominated the whole interior view and gave the appropriate note to the visit of the stalls of biscuits, chocolates, syrup, preserves, etc.

Finally, the seventh section grouped the MISCELLANEOUS INDUSTRIES. It included an important participation, really in its place, of the City of Eupen (in Palace n° 18) which presented the model of the new dam under construction on the Vesdre, in Eupen. This structure is intended to supply water to all the new industries that will inevitably be set up in the region. In addition to this remarkable participation, it is worth mentioning that of the Belgian Intercommunal Electricity Company, which, in its special pavilion, was keen to draw attention to its steam distribution facilities in the Venders region. This is a new form of energy supply which may be of considerable interest in certain regions of the country.
We should also mention the companies Hamon and Sobelco, specialised in the installation of industrial refrigerants and water treatment for all purposes, which exhibited in their joint pavilion and in Hall 18. Also worth mentioning here are the stands of the tobacco company (Hall 18) and the bookbinding and brochure company (Hall 21).

Class 15 was perhaps one of the most characteristic classes of the Exhibition, both in terms of its interest in the realisation of the fundamental programme and in terms of the diversity and value of the industries represented. Generally speaking, all the Belgian exhibitors were equal to their task, both in terms of the quality of the objects and the care given to their presentation. As we said at the beginning of this notice, it was inevitable that the great variety of industries represented would make it difficult, if not impossible, to coordinate or synthesize the demonstrations available to the visitor. However, the visitor could not fail to be struck by the remarkable vitality of these companies and the considerable progress they are constantly making. It is regrettable that in this vast panorama of our national production, the textile industries, which constitute one of our main industrial activities and in which the intervention of water is often predominant (retting of flax, for example), have not been included.