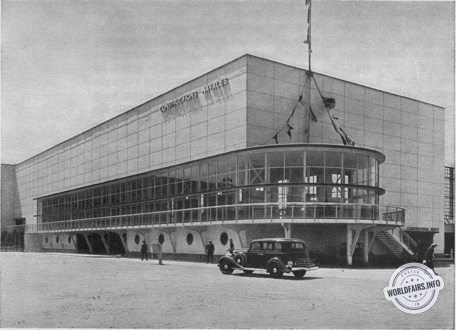 Built alongside the coal depot of the Power Station, it skilfully masked it.

There was a great deal of elegance and architectural quality in this complex, which was nevertheless treated with simplicity. The large projecting glass roof, which horizontally spanned the façades, with its cantilevered gallery, was perfectly reminiscent of the upper deck of a modern ocean liner. The portholes and the mast, with its large bulwark, reinforced this impression. Inside, a walkway along the glass roof gave the visitor a splendid view of the Meuse and the large esplanade. A frieze, composed after the Bayeux tapestry, by Bouillon and L. Hock, enhanced the decoration.

By including in its programme, in addition to inland navigation and maritime navigation, a special class reserved for shipbuilding, the Exhibition wanted to highlight the essential role of shipbuilders called upon to put all the resources of modern technology at the service of navigation, to provide armaments with new units that are always better adapted to needs, to carry out the necessary transformations, improvements and repairs.

The object of this class was defined as follows: to make the general public aware of the importance and diversity of the shipbuilding industry, to disseminate ideas relating to this special field of technology, and to arouse more active interest in all the questions arising from it.

The Belgian participation was intended to highlight the important role that shipbuilding has long played in the national economy and the opportunities it offers on the international market.

Under other headings, the need for Belgium to participate in the intense world traffic that flows through it was also emphasised. It is essential that it also participates in the necessary construction and repairs. On the other hand, Belgian shipyards for the construction and repair of inland waterways cannot fail to benefit from the increased activity of inland waterway transport, the modernisation of equipment and tracks, and the construction of the Albert Canal.

From the foregoing, it is clear that the class of shipbuilding required significant development in the context of the Exhibition. The breadth of the subject excluded the idea of a complete representation of the activities concerned. The exhibition fully achieved its proposed goal and did credit to the exhibitors who took part in it.

The first section, which was particularly developed, concerned the HISTORY OF SHIPPING ARCHITECTURE. Belgium can, in fact, boast a great maritime past and many documents and archaeological pieces have been collected in the country on this subject.

A large number of ship models from public and private collections illustrate the evolution of the construction of Egyptian, Viking, English, Mediterranean, French and Belgian ships. Among the most typical documents were a cast of the Viking bow found in the Scheldt and exhibited at the British Museum, reproductions of Neckerspoel and Austruweel dugouts, a model of a 16th century galleon (warship), models of the "Bounty", the "Constitution", various fishing boats from the Scheldt, etc.

A second section was devoted to SHIPBUILDING YARDS. Most of the Belgian shipyards were keen to be represented and to present their possibilities, their equipment and their achievements. Alongside photographs or models of their installations, they showed models of their most recent constructions. The John Cockerill shipyards in Hoboken, Jos. Boel et Fils, Thames, Mercantile Marine Engineering and Graving Docks and Béliard Crighton, Antwerp, competed in taste and ingenuity in the presentation of their stands. The Belgian shipbuilding industry, which in 1938 produced twenty-one vessels with a total tonnage of 30,197 tonnes, may only have a small share of world production, but it can nevertheless demonstrate that it can compete with foreign competitors on the technical front.

The shipyards for the construction and repair of inland waterway vessels also made an important contribution to this section. The Sainte-Barbe shipyard in Eisden-Sainte-Barbe, the Liége-Monsin shipyard, the Rupelmonde shipyard, the Jos. Boel et Fils, in Thames, Cimenteries et Briqueteries réunies, in Kruibeke, J. et F. Plaquet, in Péronnes-lez-Antoing, had set up particularly attractive stands. It is regrettable that these exhibitors did not give more space to the various aspects of studies, layouts and execution procedures that were likely to interest the visitor. In this respect, we must mention the effort made in this sense by the René Nicolaï technical office in Liège, and especially by the Rupelmonde shipyard, where a demonstration of the advantages of the Kort nozzle was presented in a very ingenious way. A number of exhibitors also showed models of special vessels and floating equipment such as dredgers, crane pontoons, clamshell barges, etc., but of the models exhibited by companies or others, most were from abroad.

A third section was reserved for the construction of PROPELLING DEVICES IN GENERAL. It included many types of motorised equipment, which gave an idea of the development of the Belgian industry in this field. Let us mention first of all the S. A. John Cockerill which exhibited, at the Palais des Industries Lourdes, one of the imposing 8,000 HP Diesel-Sulzer engines intended for the new "Prince-Philippe" trunk. Among the other exhibitors presenting marine diesel engines were: Anglo-Belgian C°, in Ghent, Ateliers de Construction de la Meuse, in Sclessin, Etablissements J. R. De Kriek, in Brussels, Ateliers D.D. Jeunehomme, in Jemeppe-sur-Meuse, S. A. Moteurs Moës, in Waremme, the Société d'Electricité et de Mécanique, in Ghent, the Ateliers Walschaerts, in Brussels.

Finally, a fourth section grouped together everything concerning MATERIALS, CONSTRUCTION PROCESSES AND AUXILIARY INSTALLATIONS specific to shipbuilding technology, as well as special installations relating to the various types of ships and boats. It was the task of this section to show how the construction of a ship involves an impressive number of trades, causes an enormous consumption of our industry's products and provides work for a host of workshops throughout the country. The diversity and number of exhibitors gathered for this purpose is proof enough. The quality of the products exhibited was a first-class reference for Belgian industry.

We will not mention all the companies that contributed to this, and it would be tedious to list the products exhibited, as they were so numerous and varied. It is remarkable to note that this enumeration would include products from almost all industries, from those of big industry to the smallest accessories for interior design or decoration.

As such, the Class 19 exhibition gave a perfect account of the character of shipbuilding: both a very special technique and a source of adaptation of the most varied techniques.

The most important part of the Belgian participation was in the Palace of Shipbuilding and the Palace of Heavy Industries. The part relating to the construction of inland ships was in the Inland Navigation Palace. Finally, various participations were spread over other palaces, notably those of Civil Engineering, the Sea and the City of Antwerp.

In this respect, we should also mention the numerous models of ships exhibited not only by shipbuilders, but also by Belgian shipowners, at the Palais des Constructions Navales and in various other places. Finally, we should mention the stand of the Federation of Belgian Model Yacht Clubs, which contained the most beautiful models built by its members.

The theme of shipbuilding, which lends itself admirably to presentation formulas, certainly gave its full measure at the Liège Exhibition. The effort made in this class will undoubtedly have convinced the Belgian and foreign public of the possibilities of Belgian shipbuilding. May the public authorities be convinced of the need to continue encouraging private initiative in this field!