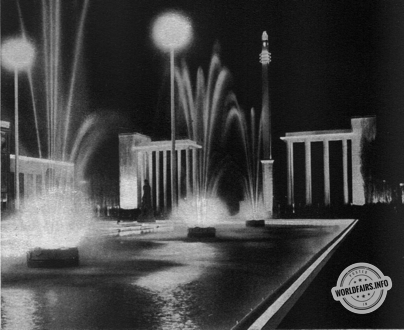 The FOUNTAINS OF THE CENTRAL ALLEY had certain common features. All the lighting equipment had to be completely submerged, which required special constructions. The submerged lamps were 500 W., adjustable at will and generally attached in groups of ten to a rod, the height of which was adjustable. The floodlights were also immersed and had a power of 1,500 W. and could also be directed in all directions. A total of one thousand one hundred and seven lamps and thirty-eight spotlights were used.

Each of the four motifs (Water Vault, Central Motif, Hemicycle and Water Garden) had a pump room installed underground. A special system was used to maintain the water level so that the submerged devices were constantly covered with water.
It is known that the WATER VAULT overlooked the artificial river that meandered through the whole alley. It was formed by a series of jets starting from two tubular beams forming the ceiling of the design. In addition, at the base of each of the side pools was a pipe carrying a series of 'spraying' nozzles, the purpose of which was to form a background to the canopy seen from the boats sailing on the river.

The pump, of the helical type, provided an hourly flow of 960 m3, at a head of 8 metres, rotating at 1,460 rpm. The motor driving it was a three-phase slip ring motor with a nominal power of 52 HP.

A special device ensured that all the jets were perfectly synchronised. Maximum brightness was achieved by means of two hundred and fifty 500 W lamps.

The CENTRAL MOTIF was located not far away, in the middle of the decorative ensemble. It consisted of a circular platform with a diameter of 21 metres, from which an ideal view of the entire water garden could be enjoyed. Access to the platform was via curved ramps with a slight incline.
The central pool had a diameter of 17.5 metres. From the middle, the main jet shot up to a height of about 30 metres and had a huge diameter of 102 mm at the outlet of the nozzle. It was designed to produce an emulsion of air and water, the reflective power of which further enhanced the spectacular effect when the projectors were illuminated.

The installation included a centrifugal pump delivering 720 m3 per hour, at a head of 30 metres: the three-phase slip ring motor, running at 1,460 rpm, developed a power of 115 HP.

The central concrete room housed the nozzle and twelve 1,500 W underwater floodlights. At the foot of the pilasters supporting the circular platform, sixteen marble boxes hid sixteen identical spotlights: so that the central jet was lit by twenty-eight large spotlights. The inner circumference of the platform and its floor were lit by red luminescent tubes forming three concentric circles.