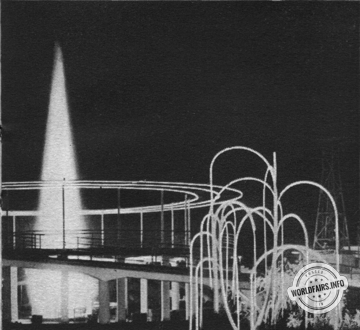 The WATER GARDEN contained a profusion of varied and unusual motifs of remarkable artistic sense.

There were twenty-eight fountains in all, fourteen of which differed in their water and light effects. Three hundred of the most varied nozzles were illuminated by as many lamps as were powerful.

It should also be noted that, apart from two fixed elements, all the fountains in this set could easily be moved at the architect's discretion.

Finally, the HÉMICYCLE closed the small river at its southern end (towards the entrance to Bressoux). Its architectural part consisted of a semi-circular crown-shaped basin to which two lateral basins led. The whole complex took on the appearance of a vast water theatre with, at the bottom of the central basin, a masterly cascade and, on the periphery of the side basins, a long series of small cove-shaped jets. The central basin was embellished by a powerful 78 millimetre diameter jet coming out of the nozzle and sixteen smaller candelabra-shaped jets. More than five hundred 500 W lamps and ten 1,500 W spotlights illuminated the ensemble.