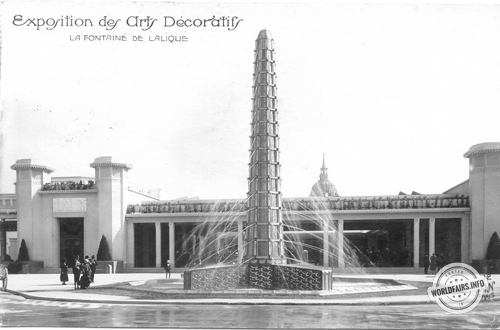 The fountain, "Les sources de France", designed by René Lalique for the Exhibition was described as marvellous by the novelist Colette.

Fifteen metres high and adorned with 128 glass caryatids, it gives the Esplanade des Invalides a fairytale-like appearance when illuminated.

Symbolising the springs, streams and rivers of the gentle land of France, this fountain was composed of a 15-metre high element, formed of 17 octagonal tiers, supporting 128 caryatids. There were 16 different models. Measuring between 47 and 70cm, they were mostly named after nymphs and had specific attributes: fish, shells, water lilies, reeds, etc.
Among them, Clytie and Alia are presented in the exhibition, with a photo of the 8m high fountain in the background.

Each section of this obelisk was made up of a bas-relief in moulded glass with grooved decoration representing the flow of water. The cement base was decorated with glass plates symbolising fish. An electric light, placed inside, gave it a fairy-like appearance at night.

It was one of the highlights of the exhibition.