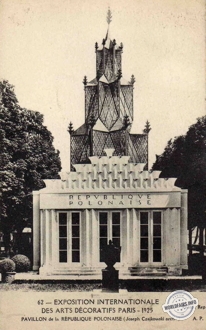 Equivalent also to the Polish pavilion. Its spire of iron and glass, cut like a diamond, forming a shining point in space at all hours of the day, lighting up at night with an inner glow, emerges from the trees of the quay in the way that the fine Polish bell towers emerge in the countryside from a clump of bushy trees. Mr. Warchalowsky, the commissary-general, and Mr. Czajkowski, the architect, have not copied one of these old steeples, all built of wood, but have given the same impression with modern means such as iron and glass, the industry of which is in favour in their country. The patio in front of the reception room is decorated with graffiti, reminiscent of Polish Easter eggs, albeit on a different scale. The main hall is illuminated by the glass spire: it is the elevation of the octagonal plan, inspired by the Polish star, which suggests the architecture and decoration, from the light and dark wooden floor, with its geometric design, to the diamond shapes of the dome. The dome rests on eight black oak columns, carved from tree trunks washed up by the Vistula River, where they had been sleeping for centuries.

Mrs. Sophie Stryjenska has decorated the walls with admirable paintings depicting the work of the seasons, traditional ceremonies, scenes from local life, characters from popular allegory, fantasies about Slavic gods. In all things, from materials to forms, the spirit of Polish particularism is manifested, which intends to be neither historical nor retrospective, but to be inspired by the same principles as the works of the past, after having subjected them to the test of modern life.