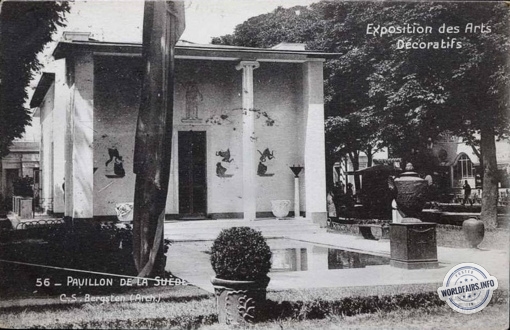 We had already noticed at the Colonial Exhibition in Marseille, in the Palace of French West Africa, the decorative effect that can be obtained with large-scale coloured maps. M. Ollivier, the architect of this palace, had taken advantage of this by decorating the dome of the palace, which he had made into a sort of world map, but seen from the inside. The Swedes have taken over a process which, from the artistic point of view alone, is worth another and which has the added merit of developing the image of the country, of revealing its greatness through a striking representation.

In fact, the fresco in the Swedish vestibule was inspired by old maps, old portfolios and even city outlines engraved in the sixteenth and seventeenth centuries, in which the countries seem to be seen in bird's eye view, in attenuated relief. It is reminiscent of Blauw's enormous sixteenth-century atlas, if I remember correctly. I take great pleasure in pointing out what is delicately, deliciously retrospective about this part of an exhibition whose rules claimed to exclude, with a Jacobin and somewhat naive severity, works of ancient inspiration. This proves that one can, and does, know how to be modern by interpreting works from the past, that these works are transformed through the prism of their interpreter and that one must be totally devoid of knowledge or sensitivity to suppose for a moment that the opposite could happen.

The way the Swedes convince us of their personality is more circuitous. The slender, slightly greedy look of their building is not reminiscent of Sweden's regional architecture, but it helps us to understand a certain aristocratic and intimate way of being that is revealed in Malmsten's elegant furniture as well as in Orrefors' glassware, in the woolen carpets with their vegetable colours as well as in the columns or the cast-iron vases. A superficial walker will no doubt be surprised that the design of the Orrefors glassworks, like that of the cast-iron vases for which this essentially Swedish industry called on the best artists from there, is inspired by a pagan mythology. On reflection, my walker will not fail to conclude that indeed the inhabitants, who are turned in on themselves by a winter of eight to nine months, seek to escape by imagination from the prison of the snows and undergo the enchantment that has always drawn the men of the North to the countries of the sun. If the same walker goes to the Grand Palais, to the room where the models, plans and photographs of Stockholm's City Hall have been assembled, he will see in this masterpiece of modern architecture a palace that is distinctly Swedish in its form, its colour and its harmony with the natural setting of the city.