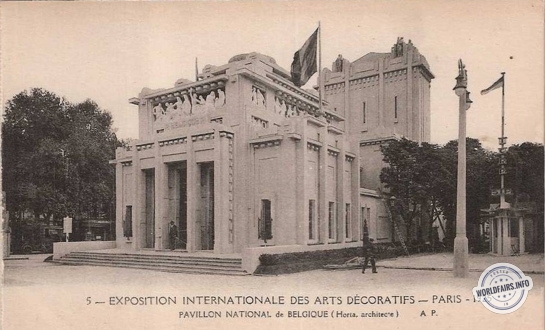 Of the four sites reserved by the Organising Commission for England, Italy, Japan and Belgium, our country occupies the first one on the left, near the main entrance to the Exhibition, facing Avenue Alexandre III.

These plots, originally similar, were hammer-shaped or tee-shaped, with a head of 15 m. x 8 m. and an extension of 32 m. x 12 m. of width on the ground, reduced, from a height of 3 metres, in proportion to the covering surface of the crown of the trees of the Cours la Reine, whose integral conservation was imposed as an easement.

It was the solution to this problem that the Belgian architect alone set out to find. He drew from it the primary originality of his work.

The rational use of staff sheets on a wooden frame, characterising the architecture by simple superimposition of planes, without any ornamental imitation or simulated stone materials, constitutes the second originality of the Pavilion. Thus, the Pavilion as a whole achieves the goal set by the programme for a temporary exhibition of Belgian decorative art: to show the level that modern art has retained in its country of origin and to make a big impact despite the small size of the site and the limited resources of a country that has barely recovered from its ruins.

The Belgian Pavilion consists of three large halls and six secondary halls, each of which has a particular architectural or decorative character.

The first room, a true Monumental Hall, is characterised by its daylighting obtained by openwork friezes on the ceiling and by its dome which rises fifteen metres from the ground.

The second room is, for the decorative art, entirely the work of the master Constant Montald, interpreted, for one of the panels
The third room has been converted into a formal dining room by Mr. Philippe Wolfers.

Thus the Belgian Pavilion houses and condenses both the secular arts in their various forms and destinations and religious art; it happily sums up the general programme of the Exhibition by bringing the purpose of Architecture and Decorative Art back to their true creative origins combined with the spirit and social conditions of their time.

The façades of the Belgian Pavilion develop the theme and the layout of the interior in three main parts: the entrance portico, which houses a superb statue symbolising Decorative Art by the sculptor Pierre Braecke and which is surmounted by a large decorative frieze by the same artist; the Hall, whose terraces end in a sort of stepped dome; and, finally, the Montald Room, flanked by a rectangular tower which dominates the entire Exhibition and at the top of which are six architectural motifs completed by as many statues representing Decorative Art through the ages by the sculptor Marcel Wolfers.

The Belgian Pavilion, whose location makes it obvious to visitors during the day, is no less fortunate in the evening shade, thanks to special lighting, for its rectilinear architecture and its decorative and sculptural elements.