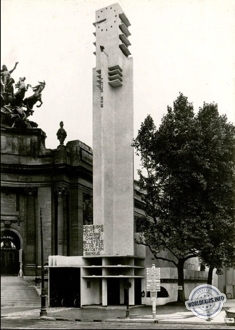 This pavilion, due to the excellent architect Mallet-Stevens, is, without question, of a new inspiration and of a very rational execution. It was built at the corner of Avenue Nicolas-II and Cours la Reine, right next to the Grand Palais. The two main elements are a 35-metre high tower over the entrance to the pavilion and a 9 x 22 metre hall. The material used is reinforced concrete, in thin layers of 20 centimetres maximum and 6 centimetres minimum.

For the speed and strength of the construction, high-strength, extra-aluminous cements were used, known as electric cements or fused cements, for which we are indebted to the late Jules Bied. A new principle was applied to obtain a good connection between the uprights and crosspieces and the filling. The clinker bricks that played this last role were assembled before the concrete was poured into the formwork. The bricks were tightly bonded to the concrete with reinforcing steel and thus contribute to the strength. The tower has a cross section with four equal branches. Three horizontal sails at the lower end and three others forming a collar at the upper end give the tower the necessary strength and contribute to its beautiful architectural appearance. These sails play a role similar to that of the brackets with which wooden piles are surrounded to reinforce them at the ends. At the top of the tower, a square bell tower, five metres high, carries a clock. An electric carillon, consisting of eight bells, plays a different tune with eight bars every quarter of an hour.

The problem of the stability of the tower and of the whole has been elegantly solved; only four support points support the whole building; they are four pillars measuring no more than a few square decimetres in section. The ceilings, walls and partitions are therefore suspended in balanced cantilevers. This arrangement made it possible to do away with the wall foundations. The high vertical walls that form beams are stiffened against buckling by horizontal walls forming the ceilings of the lower sides and, at the top, by the frame forming the ceiling of the central hall.

In order to ensure the stability of the four pillars forming the support points, it was necessary to bury them three metres into the ground and to provide, at their base, a footing capable of providing a solid foundation.

Everyone remembers the little invertible bottles weighted with lead at their base, which were part of our childhood games. The Mallet-Stevens tower was inspired somewhat by this principle. Its base was heavily weighted with earth, so that if a strong wind should ever bend it, the tower would immediately stand upright on its own.

Let us warmly congratulate the architect, M. Mallet-Stevens, and the engineer, M. Garrus, who collaborated closely on this work, the former by the originality and logic of his conceptions, the latter by the extent and certainty of his technical knowledge.