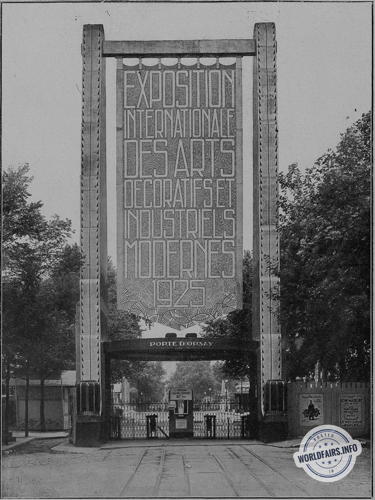 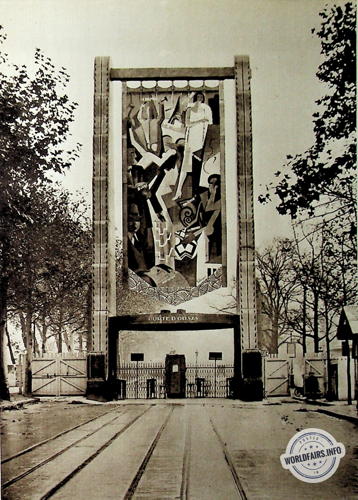 Article published in "La Science et la Vie" of May 1925

On the Quai d'Orsay, a sort of giant sign also acts as a door. The following inscription in enormous flamboyant characters: "Exposition des Arts Décoratifs et Industriels Modernes 1925", is supported by two pylons, 20 metres high and 7 metres apart. The architect of this signpost is Mr. Boileau.


Article from the magazine "La construction moderne" of 13 September 1925

This other monumental gate on the Quai d'Orsay, at the corner of the Rue de Constantine next to the Ministry of Foreign Affairs, is the work of the architect L.-H. Boileau and his colleagues Léon Carrière and Paul Binet.

Its rich, golden appearance reminds us of the creations of this architect, to whom we owe the new Magasins du Bon Marché, the Restaurant Prunier, so many sumptuous installations and the "Pomone" Pavilion at the Exposition des Arts Décoratifs.

The Porte d'Orsay, with its highly original composition, consists of two large uprights supporting a large transverse beam carrying a large rigid metal "banner" and a large circular shelter protecting the entrance and its turnstiles. Each upright rises from a large base to which it is attached on each façade by a cushion. Each base is decorated at its ends with a sort of modern vase by Mr Maestri, a sculptor and ornamentalist.

The tone of the dark parts is brown, almost black, the high bases are of this colour while the lateral parts of the uprights, real pylons, are of the same brown colour, but with numerous golden flecks. The uprights have straight sides and their edges or façades with seven slightly rounded offsets forming thin buttresses to this high construction. These fronts are bordered on each side by a long golden fillet and decorated with a high serrated motif forming seven large golden serrated leaves on each upright, ribbed with a long brown fillet supported on each side by a line of small pearl grey circles.

The bases have modern round vases, curiously composed, brown, streaked with gold with a lower part with entirely gilded flutes.
The "banner" supported by powerful gilded metal attachments, mobile on a strong bar of the same gold tone as the large upper beam, has a light yellow ochre background decorated with a diapered pattern of thin pale grey circles. This banner, bordered on each side by a slightly protruding gold band, bears the inscription "Exposition des Arts Décoratifs et Industriels modernes - 1925" in gold letters traced by a black line.

The entrance is crowned by a sort of circular ceiling, the thickness of which, without moulding or fillet, is painted brown with gold flecks and bears the inscription "Porte d'Orsay" in gold letters. This brown ceiling speckled with gold has a hollowed-out centre, completely gilded, forming a recess lined with small, ornate, transparent round glasses, like a hollow jewellery motif, surrounded by a circular line of light bulbs.
This description can give an idea of the effect that the monumental gate of the architect Boileau can have under a beautiful summer day or at sunset; in the morning the shades are more tender and seem to us even more delicious. The desired effect is certainly wonderfully achieved.

But every banner has its reverse side. This one, whose outer face was so well decorated by M. Paul Binet, had its reverse painted by M. Voguet, who appears to us as an amusing decorator. His drawing is not without criticism, but the general impression is cheerful, very cheerful. The banner on this side, facing the Exhibition, represents "decorative art". There are quite a few characters and golden inscriptions to help understand the subject: fashion, books, architecture, ceramics, wrought iron, fabrics, furniture, sculpture, painting. As we cannot give a detailed description, we will limit ourselves to mentioning how some arts have been represented. Furniture is represented by a red box bearing the inscription "le meuble", painting is represented by a sheet of paper on which is drawn half the shape of a violin, sculpture by a woman without feet, arms or head (because the huge banner was not high enough) and by a man hammering a large nail or chisel into her somewhere. At the sight of such a picture, the Eiffel Tower, now black and completely pointed, danced on one of its four feet, tilting sharply, while a bridge followed suit under the weight of white terraced buildings similar to those we saw in Djibouti. The sky, itself, is well and good, but blue with anger as it seems to turn to storm, its hue dark and full of menace to the great flag of the Eiffel Tower which seems to have been drawn and painted by a child's hand.

But apart from this panel, the Porte d'Orsay is truly pretty and the architect has managed to make it rich with equally small credits.