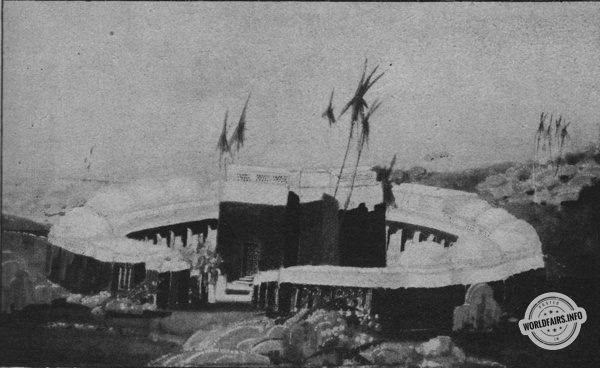 This panorama, executed by Mr. Sauvage in collaboration with Mr. Gabriel Rousseau, painter, includes a moving panorama and fixed dioramas. The viewer has the illusion of being in the front of a boat and sees the landscape go by.

The Tunisian souk surrounding the Panorama pavilion is operated by Mr. Boccara, who has installed all kinds of counters and attractions of a local character.

The North African panorama and the Tunisian souk form a very special ensemble.

In order to remain within the general programme of the exhibition, the architect had to employ a subterfuge that allowed neither reconstruction nor copying. He assumed that a traveller, completely ignorant of North African affairs, had only a few days to visit the whole territory between Rabat and Tunis, and that, in these conditions, he had to resort to ultra-fast means of locomotion, so that, from his journey, during which he crossed Morocco, Algeria and Tunisia, not neglecting the Atlas regions, he could only bring back a rather confused picture, an overview of the three countries.

This traveller, whose artistic tendencies were naturally French and modern, dreamt his journey, and his dream took shape in an image to which only the most expressive memories that remained of the things he had seen contributed.