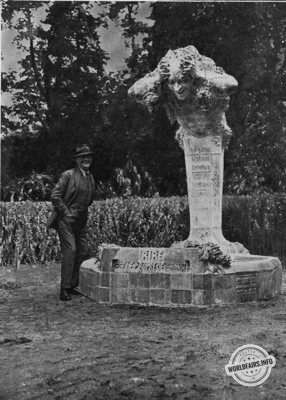 The ceramic Fountain of Laughter, by the sculptor Moreau-Vauthier, which was erected at the Exposition des Arts Décoratifs, near the Palais de la Ville de Paris, represents a faun pressing bunches of grapes against his forehead with both hands. On its base, the names Rabelais, Molière, Voltaire, Beaumarchais, Henri Monnier, Courteline are engraved, with this motto: "To laugh is ]e proper of man. "

The artist had the ingenious idea of giving his mythological character the features of one of the contemporary actors who know best how to arouse laughter, the great comic Dranem, and our engraving represents the model, laughing naturally, beside his effigy.