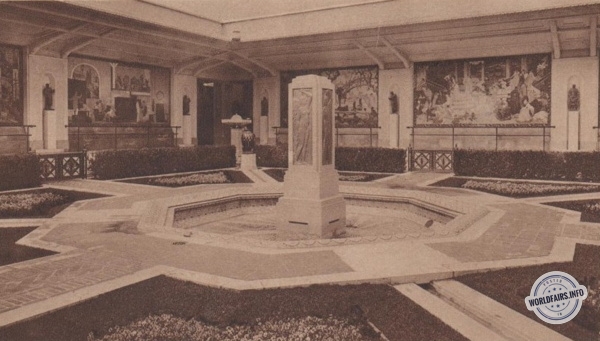 In Mr. Plumet's Cour des Métiers, flowers and green compartments play the role of colourful elements in the overall composition, as do the beautiful metal vases that adorn the corner fountains and the mural paintings of the craftsmen, just as the trimmed hedge bordering the atrium serves as a fence, interrupted only by the flowery wrought iron of the low doors. The great order of the official galleries is interrupted to make way for courtyards, two on each side of the Esplanade, which are adorned by works of sculpture, but where, unfortunately, the garden element does not dominate.

There was a good opportunity to create between the Esplanade and the quincunxes, at the only points where these count in the whole, those restful and precious parts where water would have sung among the flowers; the possibility of a garden seems to have been sacrificed to the need not to interrupt the cycle of the visit of the galleries.