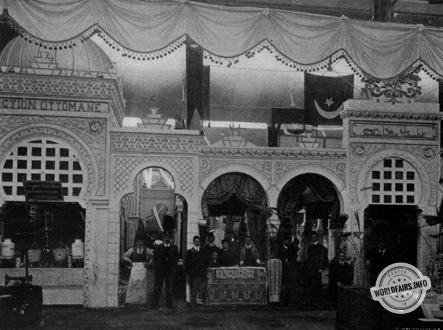 A traveller who strolled over the great Galata Bridge, which links over the Golden Horn, Stamboul to Pera, the Constantinople of the sons of the Prophet, of the D'jamis, of the turbans, to that of the ambassadors and of the Ottoman Bank, said that it is from this bridge, the crossroads of wandering races, the supreme rendezvous of the nations who are at their last men, that we have the most marvellous picture of Turkey from the greatest master of them all.

It is here," he said, "where par excellence the enchantment operates in the perspective of the three cities which on three avenues of land form Constantinople, the amphitheatre of Pera where the play of light sparkles, Stamboul which is enclosed by the ancient walls of Byzantium, Scutari from where Islamism has headed towards Europe with its great cemetery all dark against the clear background of Bithynia.

On the bridge, the white burnous of the Arab rubs against the fustanelle of the Albanian and the Bulgarian, the sapphire jacket of the Montenegrin, embroidered on all the seams, blazes next to the cauldron cafetan of an old Muslim; the turban of twisted muslin crosses the astrakhan headdress in the shape of a tower of the Kurd, the Armenian, the Georgian, the Syrian, the Maltese, the Negro of Nubia parade: . .

It is indeed a vision of the East, of that East on whose deep blue sky the mosques and minarets cut their immaculate whiteness, remaining the fierce guardians and faithful witnesses of a civilisation which hardly allows itself to be touched by the onslaught of the West and which, on a territory of 3,180,000 square kilometres, poorly populated with 25 million inhabitants, lives in the ivory tower of an original literature and in the glory of an architecture which does not eclipse the
of an architecture that does not eclipse that of the Greeks and Romans.

Turkey is a good customer for Belgium. It buys from it, year in and year out, some forty million worth of steel, iron, locomotives and railway carriages, and if we give it back some ten million, it is hardly in purchases of these sumptuous and royal carpets that it shows us in the enchantment of a white pavilion with delicate arches and tapered colonnades, a miniature of Ottoman architecture that is deliciously elaborate, light and elegant.

It is a debauchery of colours, a symphony of tones that these carpets, these rugs, these fabrics which are so many masterpieces that the tapestry industry has generated with a long patience and a so particular genius.

It seems that the word "Oriental Carpet" designates the perfection of a product whose art has no secret for the Turks and over which they traditionally take care.

And what variety in this heap of colours, what magnificence in this mountain of fabrics, what graceful lightness in these trunks and slippers which seem to be silk cases studded with flowers.

The jewels of the tapestry drag on the floor in these carpets that are shamelessly trodden on with the foot, in these marvellous carpets that display the shimmer of their beauty on the wall, see with these fabrics of supple, fine, exquisite silk, small handkerchiefs, boisterous boleros, ample curtains sown with embroideries of a delicate taste, of an insignificant skill. And the flowers open their corollas, blossom, the arabesques describe their whims as if the embroiderers had subtly slipped life and light into the skein of their silk.

Here, with furniture superbly inlaid with mother-of-pearl, ravishing necklaces, sequined ornaments that sound like rattling bells, metals bearing the imprint of a very refined artistic work, tobacco with an intoxicating aroma, everything that most evokes in our imagination this prodigious sanctuary of the past that is Turkey.