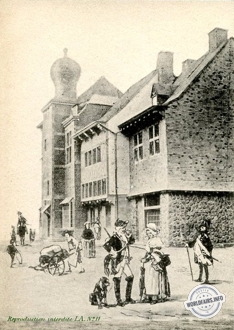 In front of us opened the "Vinâve", the street of the merchants: we noticed the house of the Cornet de Poste (Renaissance) with its large porch, the slate house of Ensival (Renaissance), the house Batta de Huy, in Renaissance style, as well as a graceful Louis XV fountain.

In several streets, rustic stalls used to house workers working on old trades in full view of the public. The old straw industry of Glons was revived and put a touch of Italy in this evocation of a western country.

Other houses offered to the eyes of the passers-by old and tasty signs of inns, estaminets; in many of them the Walloon language, sung in chorus on the words of folk poets, testified to its brilliant rebirth; sometimes still, some puppet shows where "Chanchet" assumed the principal role, added to the local interest of the district.