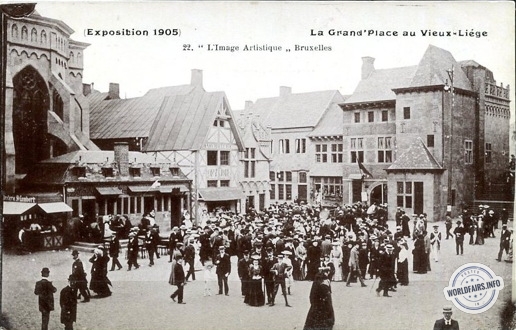 The Main plaza in old Liege was reminiscent of the ancient and delightful Place du Marché. Dominating all the buildings with its 60-metre-high spire, a partial reconstruction of the ancient cathedral of Saint-Lambert stood in the centre of the square, with its arched staircases built under Notger.

It had not been necessary to reconstitute the monument as it was originally. Indeed, without the cloisters, its dimensions were 600 feet long and 400 feet wide and its highest tower was 104 metres high.

Next to the Cathedral was the old Town Hall, as it had originally been designed. The reconstruction was based on an old town hall built in 1493-1497, following the general lines of another Gothic town hall, that of Léau.

The Gothic castle of Vêve, the Renaissance corn exchange of Durbuy, the sacristy of Léau, dating from the middle of the 13th century, a pure ogival jewel, remarkable for the elegance of its lines and the finesse of its details, were still to be seen around the square. Finally, there were the interior arcades of the second courtyard of the Palais de Justice, whose inter-columns were occupied by picturesque stalls.

In the centre of the square, surrounded by these telling monuments, stood the Old Perron, the glorious symbol of the city.